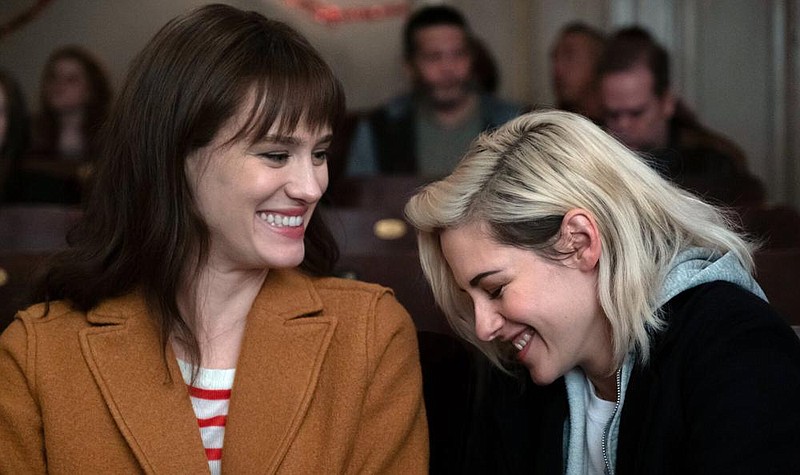 Harper (Mackenzie Davis) and Abby (Kristen Stewart) are a lesbian couple who aren’t on the same page in Clea DuVall’s Christmas-theme romantic comedy “Happiest Season,” which is now streaming on Hulu.

And why not? Every Christmas movie that has come before "Happiest Season" is, by default, a straight Christmas movie. Why not let the sapphics have their own film for the holidays?

Every year when the holidays roll around, folks start popping in Christmas movies. From "Peanuts" and "It's a Wonderful Life" to "Elf." Myself, I'm not a huge holiday movie fan. I think it's too easy for those stories to turn cliche in a boring way. Yet, even I am a sucker for "Home Alone" and "Home Alone 2: Lost in New York." I bust those out every year. If I'm in the mood, I might watch "Jingle All the Way."

But again, this is the first Christmas movie I'm aware of to put the spotlight on a couple of gay gals. So I had to tune in and check it out.

"Happiest Season" stars Kristen Stewart as Abby and Mackenzie Davis as Harper, two people supposedly in love as Christmas approaches. The story begins with Abby revealing she's just not a huge fan of Christmas, and so Harper invites her to spend Christmas with her family. Only after the invitation is accepted does Harper remember she's not out to her parents yet.

So Abby has to pretend to be Harper's straight roommate, and that's where all the tired problems with this story begin. But I'll get to those problems.

The first thing I want to touch on is how important "Happiest Season" is for queer representation. Lots of folks on social media have been complaining about issues I'll write about in a few more paragraphs, but I want to highlight that this is a good movie.

It was supposed to be released in theaters (like so many films this year), but due to the pandemic, Hulu snatched it up. And I think that's the kindest fate for "Happiest Season." Because while I appreciated the movie, and I know lots of other LGBTQ+ folks did as well, it probably wouldn't have been a smash hit at the box office.

Too many folks would have either complained about social justice warriors trying to ruin the holidays or the Family Foundation for the Foundation of Families would organize a boycott because the gays have declared war on Christmas. It's better that Sony got the cash up front from Hulu (assuming that's how the deal worked).

What makes this movie worth sticking around for are the characters in it, namely Kristen Stewart and Dan Levy (who I absolutely love now that I've seen "Schitt's Creek").

Stewart is fantastic in "Happiest Season," and I'm so happy people are finally realizing she's a good actress. For the longest time while "Twilight" was rampaging at the box office, Stewart was everyone's favorite punching bag. But now that she's out as a bisexual woman, she's become this queer icon over the last couple years. And damn can that girl rock a suit.

I'm in a small camp of people who actually really enjoyed the latest "Charlie's Angels" reboot. And it was mostly because of Kristen Stewart. She was so fun to watch as a spy.

As for Levy, he made me laugh so hard in "Happiest Season." And he made me tear up, too. He's a great actor. Levy played such a loving friend for Stewart in this movie, and after the way she was treated, he was a godsend. He has this amazing speech in the movie that hit me so hard:

"Everybody's story is different. There's your version and my version and everything in between. But the one thing that all of those stories have in common is that moment right before you say those words, when your heart is racing, and you don't know what's coming next. That moment's really terrifying. And then once you say those words, you can't unsay them. A chapter has ended, and a new one's begun, and you have to be ready for that."

He's talking to Stewart about coming out to one's parents. Levy reminds her that not every LGBTQ+ person is blessed with accepting parents. He wasn't. I sure as hell wasn't. Levy was the best friend in this movie, and I wish his character was real and in my life.

As for the rest of the cast, everyone in Harper's family (except her younger sister Jane, who is an absolute delight) is awful. Mary Steenburgen, Victor Garber, Alison Brie -- all great at playing jerks.

The real problem with "Happiest Season" is its plot of making sure the family doesn't find out the protagonists are gay. That is such a tired trope, and it bummed me out that in this first holiday story that gives lesbians a front and center role, the story had to relate to coming out of the closet. Were there no other narratives available for this movie?

I don't like Hallmark movies. I think they're bland and ultimately pointless. But I'll confess that when I first heard we were getting a lesbian Christmas story, I expected it to dance closer to the Hallmark path.

Maybe a city girl on her way to represent an important client in the American Midwest finds her car breaking down in a rural Iowa town. She's naturally upset, and wants nothing more but to move on. Meanwhile, another gal who runs a body shop informs her the part her car needs won't arrive until the day after Christmas, and the city girl will have to stay in town. Then she'll discover the true meaning of the holidays and fall in love with the mechanic.

You see, folks? These movies write themselves. (By the way, Hallmark, you can have my screenplay for the right price. Email me.)

But I was expecting something closer to that instead of the emotional abuse Harper puts Abby through. I have no complaints about Mackenzie Davis' acting. I loved her in "Terminator: Dark Fate" and in "Blade Runner 2049." She did a terrific job in this movie. Unfortunately, the thing she did really well was torment her girlfriend, who wanted nothing more than to make Harper happy.

My wife and I voiced several complaints all throughout the movie for what Harper puts Abby through by hiding their relationship. And toward the end, Harper is emotionally manipulative and toxic. I screamed at the television, "Break up with her! Run away!" I didn't get what I wanted.

What's more, the movie introduces Aubrey Plaza as an ex-lover Harper had abused in the exact same way back in high school! All I wanted by the end of the movie was for Abby to dump Harper's abusive butt and call Plaza. She was much more kind and sympathetic to Abby's plight. Reading through Twitter and Facebook comments, I'm clearly not the only one who felt that way.

It's not Harper's reluctance to come out to her parents that is the primary problem with this movie. It's how she treats Abby while trying to hide her sexuality. She makes Abby feel like unwanted garbage, and that's never acceptable in a relationship. I know the movie wanted to end on an upbeat and positive note, but by the time it was over, I was just waiting for Harper to break Abby's heart again.

Every member of Harper's family is a nightmare, but none more so than her nephew and niece. Those children were awful, true crotch goblins.

Of course, even with all of that negativity factored in, this movie still had its funny and touching moments. It is a good movie overall. I just have big problems with Harper. But it's nice to see some representation in the media. I hope we continue to get more LGBTQ+ characters in television shows and movies. And I want them to be written well instead of ending up as cliches.

Bring on more holiday movies with people of color, with disabilities, with LGBTQ+ people. Hollywood will only get better as diversity becomes the standard.

And the next time someone wants to make a lesbian Christmas movie, maybe nudge it an inch or two closer to Hallmark territory.