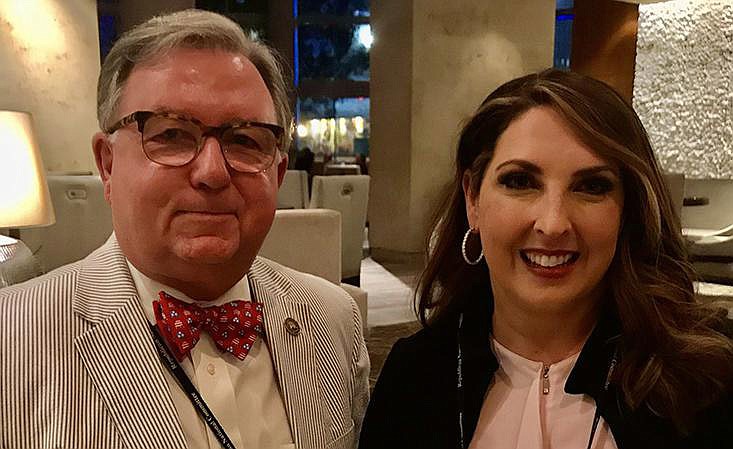 After 12 years as state party chairman, Doyle Webb will hand the gavel to his successor today, and focus on his race for co-chairman of the Republican National Committee.

At today's meeting of the state central committee in Benton, Republican activists will elect Webb's replacement.

"I'm not going to disparage my fellow members, but there aren't many state chairs that are as effective, that can raise the money, organize the party and have that type of leadership and influence that Doyle has in Arkansas," McDaniel told the Arkansas Democrat-Gazette shortly before the Republican National Convention last summer in Charlotte, N.C.

Webb, who celebrated his 65th birthday Thursday, has been active in Republican politics for more than four decades, initially in Benton, eventually statewide.

A former Saline County justice of the peace and state senator, Webb served as chief of staff to Lt. Gov. Win Rockefeller.

Narrowly elected as chairman in 2008, Webb would go on to serve five more terms, running unopposed each time.

When he took over the job, the Republicans were the state's minority party. Democrats controlled both houses of the state Legislature as well as the Governor's Mansion, both U.S. Senate seats and three of the state's four seats in Congress.

Today, Republicans hold all of the state constitutional offices, the congressional and Senate seats, and have majorities in the General Assembly.

Since the defeat of Democratic U.S. Sen. Mark Pryor in 2014, only Republicans have represented Arkansas on Capitol Hill.

"When Doyle became chairman, the party had debts and loans to pay. They had part-time staff; they didn't have full-time people," said party spokesman Seth Mays.

Webb is leaving a stronger party apparatus and a modern Little Rock headquarters that Republicans will enjoy for years to come, Mays added.

Webb had the vision to open the building project and the drive necessary to complete it.

"Your headquarters for the Arkansas Republican Party, which I've seen -- I saw it as it was being built -- is probably one of the best in the country. He raised the money to do that," McDaniel said.

"During Doyle Webb's tenure as Chairman of the party he has presided over the largest growth in the Republican Party and has led our party though a time of growth with full compliance with federal elections laws. He has been a great partner with me as Governor, where he has led the party with a steady hand. He has worked hard to broaden the base of our party, to be a diverse party, to make sure we are open and really worked in building support of the party in the minority community. We will always be grateful for his service," Hutchinson said.

"During that same time, he has been a star on the national stage as legal counsel for the party and being involved in the national committee. He is highly respected nationally, and I expect that leadership role to continue," Hutchinson added.

Webb spoke at the 2016 Republican National Convention in Cleveland. The following year, McDaniel named him as the committee's general counsel.

"He is a steady hand. He's a leader. He's one of the best members we have on the RNC," she told the Democrat-Gazette.

Because of term limits, Webb nearly stepped aside a few years ago. But state committee members revised the rules in 2016 so that Webb could serve an additional two terms, Mays said.

On his final election night as chairman, Republicans claimed landslide wins across the Natural State.

But March 3 was a memorable election night as well. On that day, Webb's wife, a former prosecutor and administrative law judge, was elected to the state Supreme Court.

As he prepares to depart, Webb predicts the state Republican Party's best days are ahead.

"It'll continue to grow and continue multiply," he said.

Though he's giving up the reins in Arkansas, he plans to remain active in Republican politics.

On Jan. 8, when the Republican National Committee gathers, Webb will be one of the candidates vying for committee co-chairman, the organization's second-highest post.

"I know we've been successful here and I have some skills and some gifts that I want to offer to the RNC and the rest of the nation," Webb said Friday. "We'll see if it works out."