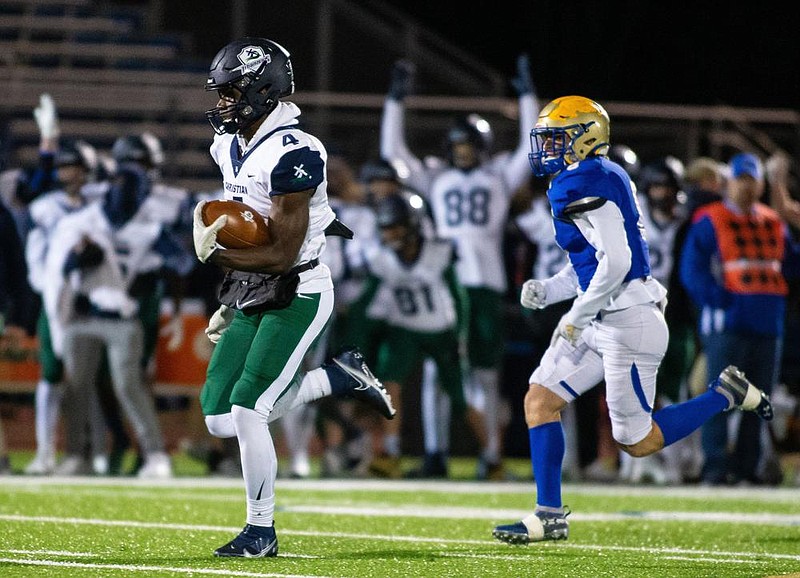 Corey Platt (left) runs 59 yards to score a touchdown Friday in Little Rock Christian’s 52-28 victory over Harrison in the Class 5A semifinals at F.S. Garrison Stadium in Harrison. Platt, a Tulane commitment, scored six touchdowns to lead the Warriors to their third consecutive trip to the state championship game. (Special to the NWA Democrat-Gazette/David Beach)

HARRISON -- Corey Platt made sure Harrison never had an opportunity for more of its last-minute magic Friday night.

The Little Rock Christian senior and Tulane commitment scored six touchdowns to lead the Warriors to their third consecutive trip to the Class 5A state championship game with a 52-28 semifinals victory over the Goblins at F.S. Garrison Stadium.

"He's so versatile. He can play running back, receiver, outside linebacker, inside linebacker, cornerback, safety. He's just one of the most versatile players I've ever coached, and he did an outstanding job making some plays early for us."

The first time Platt touched the ball was an early indication of what was to come. Little Rock Christian (9-2) lined up in the Wildcat formation as it faced fourth and 1 on its opening possession, and Platt raced 59 yards for a touchdown to give the Warriors a lead they never relinquished less than two minutes into the game.

Platt added a 33-yard touchdown reception later in the first quarter, then scored touchdowns four more times out of the Wildcat formation. He finished with 108 yards on just 9 carries, and he added 3 receptions for 47 yards.

"It was amazing," Platt said. "I have to give it all to God. I wasn't coming up here for no reason. A three-hour drive -- I had to put on a show. That's what I was thinking.

"Coach said he was going to give it to me. He told me before the game I was going to have a big night. I believe in him, and he believes in me. I went out there and just made it happen. This was the first time I touched the ball that many times out of the Wildcat. I did some early in the year, but not this many times."

Harrison (11-2), which won its previous two playoff games on scores in the final minute, was in a 14-0 hole after Platt's touchdown reception. The Goblins pulled within 14-7 on Cole Keylon's 27-yard touchdown pass to Noah Moix, then forced a punt on Little Rock Christian's next possession, but they fumbled on the first offensive play.

Platt then scored from 8 yards out on the next play to give the Warriors a 21-7 cushion with 9:59 before halftime. Harrison pulled within 21-14 on Keylon's 57-yard touchdown pass to Tyler Hutcheson, but Little Rock Christian answered with Isaiah Hankins' 22-yard field goal late in the first half and Platt's 4-yard touchdown run on the Warriors' first drive of the second half.

"We knew we would have to play extremely well to win," Harrison Coach Joel Wells said. "We turned the ball over a couple of times in the first half and got behind the 8-ball, then we had to play catch up and do some things we normally don't do.

"I thought it was critical coming out of the half. We were down 24-14, and if we could have scored on that opening drive and cut it to three, we could have got the game to the fourth quarter with a chance. We just couldn't do that." 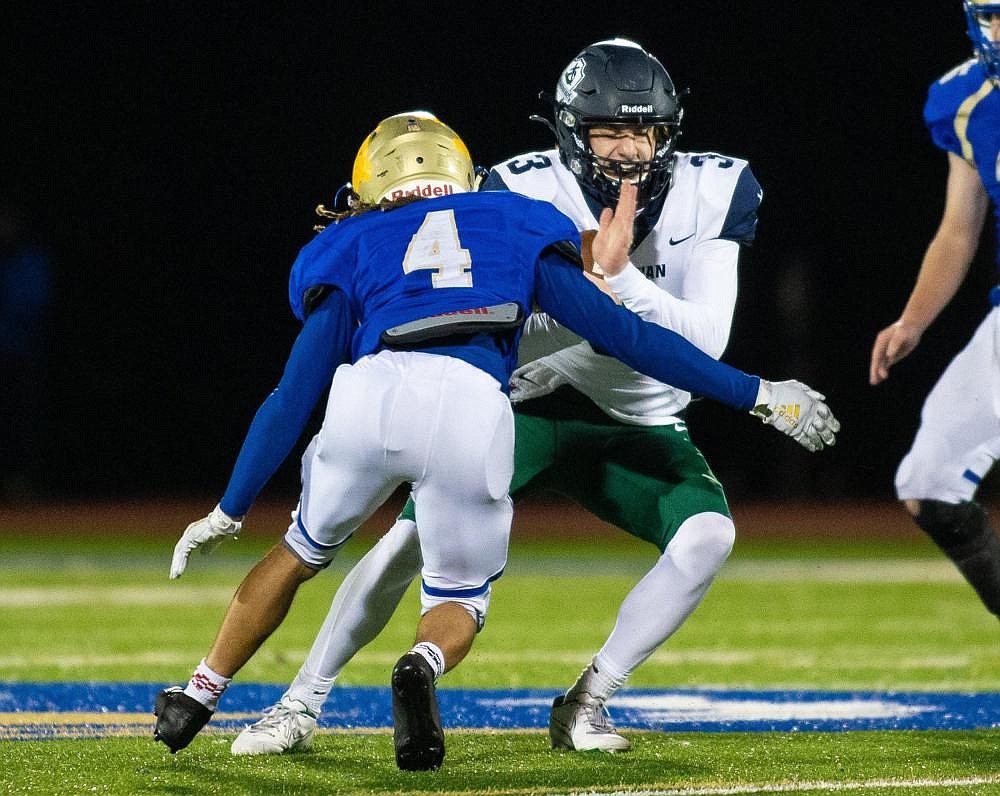