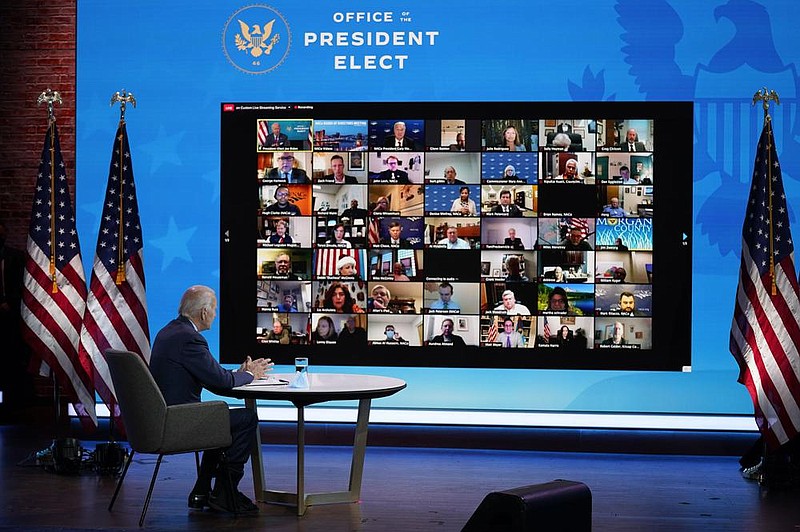 President-elect Joe Biden, sitting Friday in The Queen Theater in Wilmington, Del., participates in a virtual meeting about jobs with the National Association of Counties Board of Directors. (AP/Andrew Harnik)

PHILADELPHIA -- President Donald Trump's attempt to have Pennsylvania's Republican-controlled Legislature overturn the state's election results received what appeared to be its final blows Thursday with a late-night order from the U.S. Supreme Court and a statement from the General Assembly's Republican leadership that they had no intention of doing so.

The Supreme Court order came in response to a request from Rep. Mike Kelly, R-Pa., who asked the justices to declare the state's vote-by-mail law unconstitutional and to "decertify" Pennsylvania's results, which cemented President-elect Joe Biden's victory by roughly 81,000 votes last week.

But just hours after Kelly filed that appeal Thursday, Justice Samuel Alito crafted a schedule for the case, giving state officials until Wednesday to file their reply.

The date set by Alito -- who oversees emergency matters arising from Pennsylvania, New Jersey and Delaware -- comes one day after what is known as the "safe harbor date," the federal deadline for states to resolve any outstanding challenges to their elections. Beyond it, the state's slate of appointed electors is considered to be locked in for the Dec. 14 Electoral College vote.

[Video not showing up above? Click here to watch » https://www.youtube.com/watch?v=54O8RttgYp0]

It is still possible that the Supreme Court could decide to consider Kelly's appeal about the constitutionality of Pennsylvania's mail-voting law outside the context of the 2020 election.

"The timing here matters," said University of California-Irvine law professor Richard Hasen in a post Thursday evening on his Election Law Blog. "I don't see a path for Trump to use court cases to overturn the election results in even one state, much less the three states he would need at a minimum to get a different result in the Electoral College. But as the clock ticks down, those tiny chances fade into nothing."

Several other Pennsylvania cases remain pending for potential Supreme Court review, but none of them explicitly seeks to reverse the outcome or involves enough votes to accomplish that goal.

The court has not moved to hear any of them on an emergency schedule.

Still, that hasn't stopped the push among some GOP lawmakers in Harrisburg, led by state Sen. Doug Mastriano, to find some other way for the General Assembly to intervene.

In recent days, Mastriano has led a group of three other Republican state Senate members and 29 in the House in filing resolutions calling upon Gov. Tom Wolf and Secretary of State Kathy Boockvar, the elections administrator, to recall the certified election results.

Neither of the proposed measures was called for a vote before the General Assembly's term ended Monday.

"The General Assembly lacks the authority to take action to overturn the popular vote and appoint our own slate of presidential electors," it read. "While we clearly recognize the need for legislative action to address the issues presented by the 2020 General Election, some of the actions requested by our residents would require us to disregard the statutes and Constitution we have fought so hard to protect."

The GOP leaders vowed to address what they described as "very legitimate and credible issues" about the "security of mail-in ballots and the process for counting votes" in future elections as part of the next legislative session that begins in January.

In Wisconsin, a judge hearing Trump's federal lawsuit seeking to overturn Biden's win in the state said Friday that the president's request to "remand" the case to the GOP-controlled Legislature to pick new electors was "bizarre."

The federal case is one of two Trump has in Wisconsin making similar arguments. He filed another one in state court, which the Wisconsin Supreme Court refused to hear before it first goes through lower courts.

Hearings on both lawsuits were scheduled for Thursday, with the judges noting the importance of resolving the legal battles before the Electoral College meets.

Trump, who argues that hundreds of thousands of absentee ballots cast in accordance with state guidelines were illegal, wants a federal judge to give the Republican-controlled Legislature the power to determine who won the election.

"It's a request for pretty remarkable declaratory relief," said U.S. District Judge Brett Ludwig in a conference call to set deadlines and a hearing date. Ludwig, who said it was "an unusual case, obviously," also cast doubt on whether a federal court should be considering it at all.

"I have a very, very hard time seeing how this is justiciable in the federal court," said Ludwig, a Trump appointee. "The request to remand this case to the Legislature almost strikes me as bizarre."

The judge questioned why Trump wasn't going directly to the Legislature if he wants lawmakers to get involved with naming electors. Attorney Bill Bock said Trump needed the court to rule that the election was "invalid" so the Legislature could get involved. He also said that the term "remand," which is typically used to describe when one court sends a case to a lower court, was "inartful."

In his state lawsuit, Trump is seeking to disqualify 221,000 ballots he claims were cast illegally. Judge Stephen Simanek, who is hearing that case after the Wisconsin Supreme Court refused to take it initially, said Friday he would rule from the bench following next week's hearing that's scheduled to start hours after the one in federal court.

Meanwhile, DeKalb County, Ga., recertified its recount Friday morning, affirming that Biden won the county, but was unable to explain a roughly 70-vote difference from its earlier recounts.

The county Board of Registers & Elections voted unanimously to recertify the recount, which was requested two weeks ago by the Trump campaign.

About 373,000 DeKalb County voters cast ballots in the election. The Georgia Secretary of State's Office had set a deadline of last week for counties to complete their recounts, which came on the heels of an earlier manual audit of the presidential race.

DeKalb had to recertify the results due to the discrepancy with the previous count after a statewide audit.

"There was a margin of error, and by law if there was a change in vote totals, we have to recertify the elections," Erica Hamilton, director of the DeKalb Board of Registers & Elections, said during the virtual meeting. "We are not the only county that has to recertify its election results ... it's a very small margin."

Hamilton said her office was not able to determine the source of the 70-vote discrepancy, saying that ballots were moved "several times" during the multiple recounting efforts. The latest recount took place in Stonecrest starting Nov. 24 and took the county about five days to complete, Hamilton said. Employees received Thanksgiving and Sunday off.

Hamilton added that it's unclear whether the error was caused by people or machines.

"[The discrepancy] bothered me," she said. "I had staff searching, searching, searching. It's the first time we've done this with the new Dominion [voting] system, and I hope that if we have a recount in January, we're able to alleviate this."

Anthony Lewis, one of two Republicans on the board, voiced his concerns about the error before voting to recertify the presidential results.

"This is the first time since I've been on this board where I've felt nervous about a recertification," he said. "We can't answer the public. If someone comes up to me and asks what happened, I have nothing to tell them."

The previous manual audit, which was ordered by Secretary of State Brad Raffensperger, led to 95 omitted ballots being discovered in DeKalb. The incident led to an elections manager's firing.

Biden won the presidential race in Georgia by about 12,000 votes.

Elsewhere, Detroit lawyers Thursday asked a Wayne County judge to reject the latest request for an audit of the county's election results and to sanction the lawyer who asked for it.

But David Kallman, a lawyer for the poll challengers, argued he had the right to demand an audit under a 2018 constitutional amendment.

In addition, he argued that a state Supreme Court opinion in November supported his request, noting three Republican-nominated justices argued the courts should address the rule where it is silent on the type and time period of the audit promised in the Michigan Constitution.

"What we're asking for is what's clear under this statute, is that the county clerk perform the audit under the direction and supervision of the secretary of state," Kallman said.

Kallman asked specifically for an audit of the accuracy and integrity of the Wayne County results and that it be completed in an expeditious manner before electors are officially chosen.

Kenny said he would issue a written opinion by noon Tuesday, which is the day states are supposed to pick their electors without inviting potential congressional intervention.

Information for this article was contributed by Jeremy Roebuck of The Philadelphia Inquirer; by Scott Bauer and Marc Levy of The Associated Press; by Zachary Hansen of The Atlanta Journal-Constitution; and by Beth LeBlanc of the Detroit Free Press. 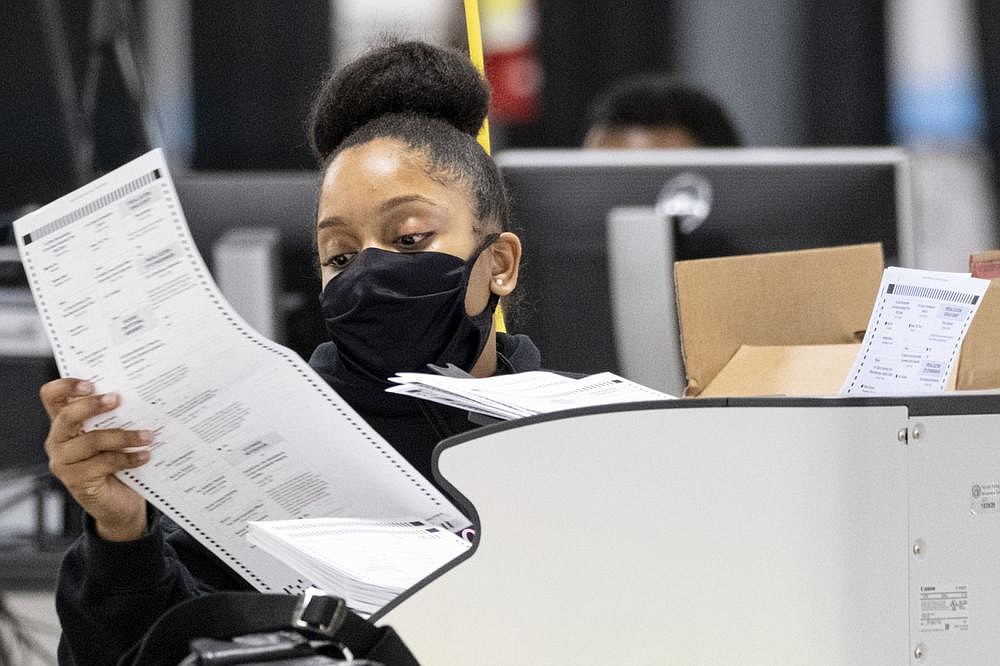