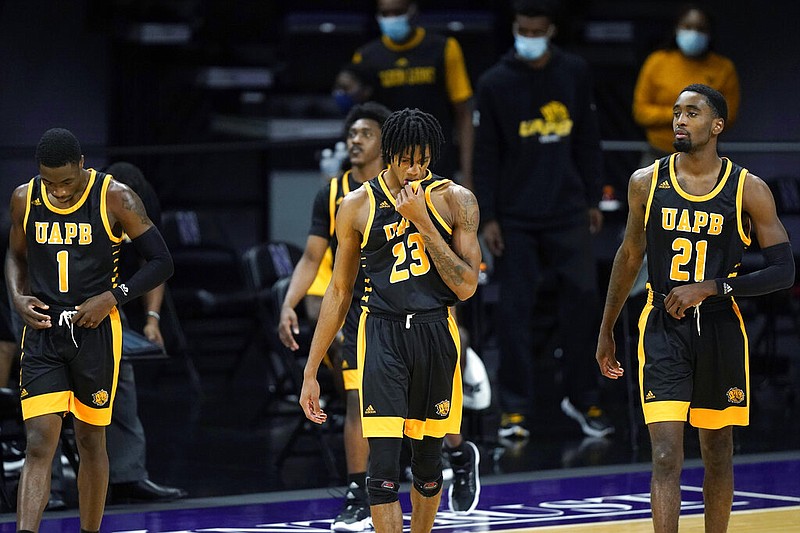 University of Arkansas at Pine Bluff players walk onto the court during the second half of the team's NCAA college basketball game against Northwestern in Evanston, Ill., on Wednesday, Dec. 2, 2020. (AP / Nam Y. Huh )

The University of Arkansas at Pine Bluff men's basketball team will complete its two-week, five-game season-opening road trip Saturday in a 7 p.m. game at St. Louis.

The UAPB Sports Network radio broadcast begins at 6:45 p.m. on 99.3 FM The Beat, online at uapblionsroar.com/live, and on the free UAPB Athletics app. The game will also be televised on FOX Sports Midwest and on ESPN+.

The Golden Lions (0-4) looked good in spurts in Wednesday's loss at Northwestern, trailing by 10 points at the half before the Wildcats pulled away in the second half.

Jalen Lynn scored a season-high 12 points and had two assists in his first start for the Golden Lions. Markedric Bell posted his second consecutive double-double and fourth in his career with 11 points and 10 rebounds and a pair of assists. Shaun Doss Jr. posted his eighth straight double-digit scoring game dating back to the 2018-19 season with 10 points and two assists.

Joshuwan Johnson scored eight points with three assists and two steals, and Dequan Morris tallied six points and seven rebounds, as all but two points for UAPB came from the starting unit.

"I thought we came out and played hard and made some shots in the first half," said UAPB head coach George Ivory. "In the second half, we missed a lot of opportunities on offense."

The Golden Lions will face a St. Louis team (2-0), which has posted home wins over Southern Illinois-Edwardsville (89-52) and LSU (85-81). The Billikens average 87.0 points per game to lead the Atlantic 10 Conference while shooting over 50 percent from the field and better than 43 percent from three-point range. Javonte Perkins is sixth in the nation in scoring at 27.0 ppg. and is one of four players averaging in double figures.

"St. Louis is a very good basketball team that's coming off a victory over LSU," Ivory said. "They present a lot of challenges for us, as they have multiple players that can score. It will be a great test for us."