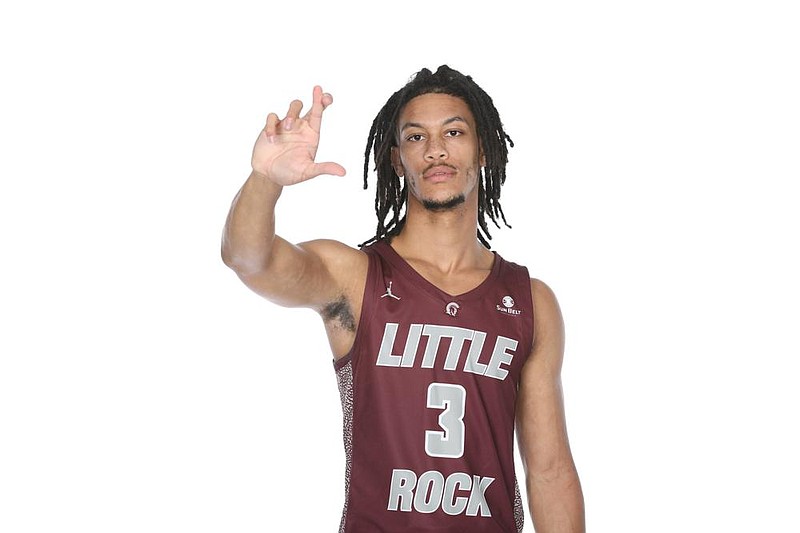 UALR basketball Coach Darrell Walker was searching for something -- or somebody -- to spark his Trojans on Sunday afternoon at the Jack Stephens Center.

"I thought we were kind of sluggish," he said.

Walker scanned the locker room at halftime and turned to 6-5 sophomore guard Isaiah Palermo, who played less than a minute in the first half.

Walker is glad he did.

Palermo, who averaged 3.1 points in the Trojans' four games in Louisville, Ky., started the second half and didn't leave the floor until he fouled out with 5:23 to play in the University of Arkansas at Little Rock's 86-83 victory over the University of Central Arkansas.

He contributed 9 points, 3 rebounds and 1 steal, all of his points coming in the first 7:54 of the second half. His all-around play helped the Trojans overcome a 39-38 halftime deficit to take a 58-49 lead midway through the second half.

Palermo replaced starting guard Jovan Stulic, who has been struggling on the defensive side.

"He hasn't been guarding people," Walker said of Stulic. "Last year he guarded people. So I decided to go with Isaiah, and thank goodness I did go with Isaiah.

"We don't win this basketball game without Isaiah. He's a presence out there. He's crafty."

At least two of the fouls Palermo drew were blocks.

"He gave his body up," Walker said. "But at the end of the day, you can't have one guy. You've got to have the whole team playing together. I don't like my team defensively, at all. Not at all."

Walker's displeasure with the Trojans' defense goes back to the start of the season two weeks ago when UALR averaged 73.0 points per game but yielded 72.3 ppg while going 2-2 in Louisville.

"At the end of the day, this team is nowhere near the team I had last year defensively," he said of his defending Sun Belt regular-season champs. "Most of the players are back, but the intensity and following the game plan is nonexistent. That's on me, and I'm going to get after it this week. Trust me."

Some of the sluggishness the Trojans displayed can be attributed to their 6 a.m., 7-hour bus ride back from Louisville on Friday, and a short shoot-around Saturday.

Walker said he told his team Sunday afternoon to get some rest, because with nine days between games there is much work to be done.

UCA, which finally opened its season Friday with an 85-68 loss at Memphis after a series of coronavirus-related postponements and cancellations, is striving for continued improvement as it plows through a nonconference schedule that includes games at Saint Louis on Tuesday and at the University of Arkansas on Saturday.

The positives Sunday include reducing turnovers from 30 against Memphis to 18 against UALR; outrebounding the Trojans 37-36; and showing the ability to fight back three times after falling behind by 11, 9 and 8 points.

"We're still trying to get the rust off," Boone said. "We have to keep working. Everybody else is ahead of us."

Junior guard Deandre Jones bounced back from an 8-point, 7-turnover effort against Memphis to score 23 points with 4 assists and 3 turnovers.

The Bears got 14 points and 8 rebounds from Rylan Bergersen, and 11 points each from Jared Chatham and Khaleem Bennett off the bench.

"I was disappointed in the outcome," said Boone, who realizes measuring UCA's improvement in wins and losses may not be the best way to judge their nonconference progress. "We can tell when we're doing things right."

The same goes for the Trojans, who got 19 points, 13 assists, 5 rebounds and 2 assists from point guard Markquis Nowell; 18 points and 7 rebounds from Nikola Maric; 14 from Ben Coupet Jr.; and a 12-point, 13-rebound, 3-block game from 6-10 center Ruot Monyyong.

The Trojans regained the lead at 38-32, but the Bears scored the final seven points of the half to lead 39-38.

UCA pulled to 83-81 in the final 24.5 seconds, but the Trojans got three free throws from Marko Lukic to hold on.

"I'm happy we got the win, but I'm not a happy coach right now," Walker said.