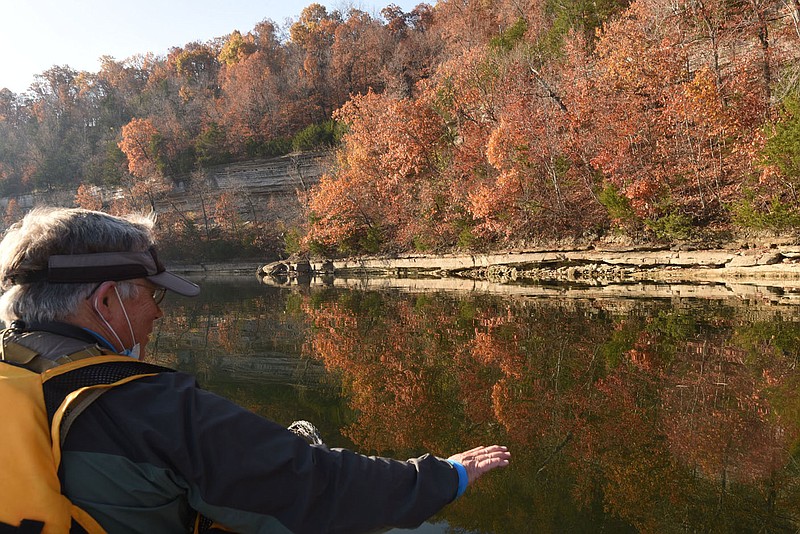 Joe Neal of Fayetteville admires the reflection of a bluff on glass-smooth water Nov. 6 2020 at Beaver Lake. Neal looked for birds near Rocky Branch park, one of the top birding destinations on the lake. Neal found raptors, waterfowl and songbirds during a morning of birding by boat. Go to nwaonline.com/201208Daily/ to see more photos. (NWA Democrat-Gazette/Flip Putthoff

Migration is in full swing at Beaver Lake as autumn moves toward winter.

Fish start moving to waters they prefer in winter, particularly striped bass, which move toward the headwaters as the reservoir cools. Above the rippled water, all kinds of birds are on the move. That's what brings enthusiastic birders like Joe Neal of Fayetteville to the big lake.

A day of bird watching on land and by boat was the greatest show above earth during the peak of migration for several kinds of birds. Neal arrived at Rocky Branch park on Beaver Lake early on Nov. 6, a calm and sunny Friday.

Through binoculars Neal savored an amazing sight. Eleven common loons moved slowly across the smooth water in dazzling morning light. Close by, a raft of ducks were a colorful sight through his field glasses.

[Don't see the video above? Click here to watch: https://www.youtube.com/watch?v=VXP6grCoJcY]

"The water was so perfect. The loons were a show of black and white," Neal reported later in the morning when his friend arrived with the boat. "That raft of ducks had gadwalls, mallards, redheads, buffleheads and ring-necked ducks."

Those feathered sights from shore would make any birders day. More "oh wow" birding sights unfolded as Neal and his novice birding friend cruised slowly over the big water. Neal is author of a number of books about birds. He leads field trips for the Northwest Arkansas Audubon Society when there's no pandemic.

The area north of Rocky Branch park is some of the widest on the lake and a haven for waterfowl, bald eagles, shore birds and songbirds. Here the lake is nearly two miles wide from the south shoreline at Rocky Branch park to the north shore, near Slate Gap Road. Neal has measured it.

The number of bald eagles at Beaver Lake soars as winter nears, and the Rocky Branch area is a prime place to see them. Two adult bald eagles, one on shore and another soaring overhead, were an ooh, aah sight aboard the boat. Neal jotted down each bird species seen in his field notebook. Later, he'd add a juvenile bald eagle to his tally.

Birds weren't the only sight to behold this beautiful morning. There's a bluff just east of Rocky Branch park that is one of Neal's favorites. It towers about 100 feet above the water and is loaded with sugar maples.

The peak of fall color had passed, but the sugar maples still glowed in bright hues of orange, yellow and red. Indian Bluff, some call this rock landmark.

"This is a special habitat," Neal explained. "The bluff retains a little extra moisture." That contributes to the growth of the sugar maples, he said. "Plus, this bluff is a great place to see birds."

The small, quiet outboard eased the aluminum boat toward the north shore of the lake. Neal gazed through binoculars at rows of mud nests lining another sheer Beaver Lake bluff near lake marker No. 7. Red Bluff, many people call it.

Nests lining the cliff's overhangs are home to hundreds of cliff swallows during summer. The swallows swarm over the lake on summer mornings as they feed on flying insects. By now, they've completed their migration south, all the way to South America, Neal said.

On the water, 40 coots, with their black bodies and white bills, swam in tight formation in front of Red Bluff's rock wall. West of the bluff, it was easy to see the small heads of horned grebes, some 300 of them, in a bay near Slate Gap Road.

One grebe stood out, a larger bird that got Neal all excited, but quiet, too, so he wouldn't spook it. Here was a rare western grebe, a true trophy sighting for area birders.

"It's an extremely rare bird for Arkansas," Neal said, watching the western grebe glide slowly across the surface. "I haven't seen one in a couple years here."

"This area north of Rocky Branch is one of the best areas in the whole state to see horned grebes," Neal said.

By land or by water, birds are on the move as fall melds with winter at Beaver Lake. 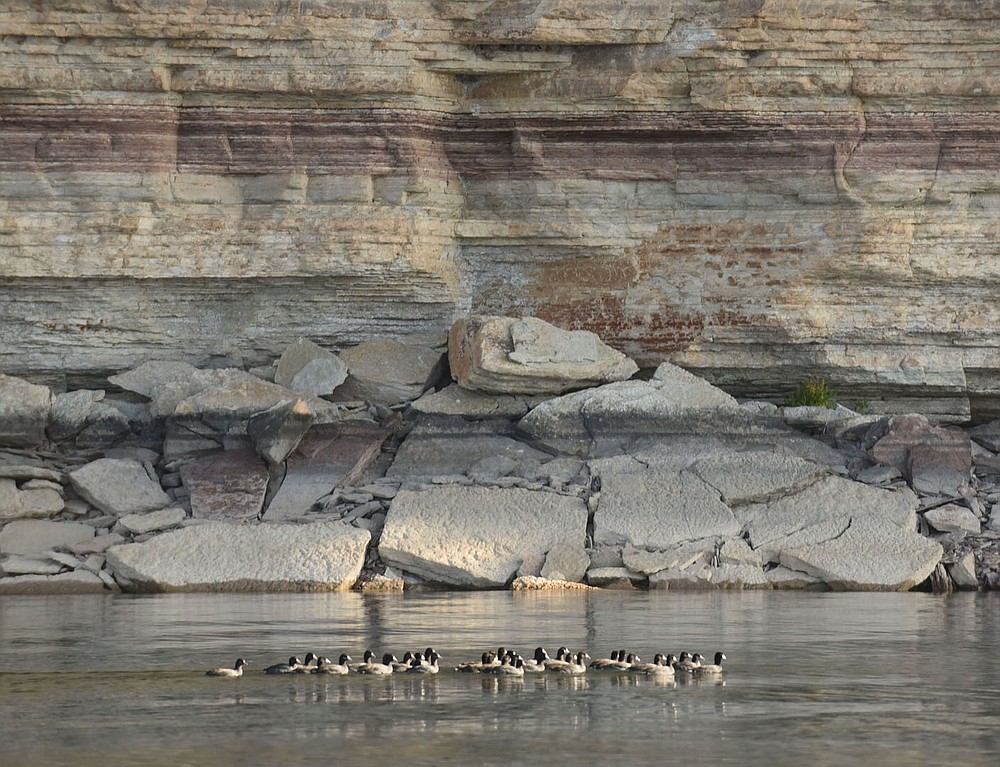 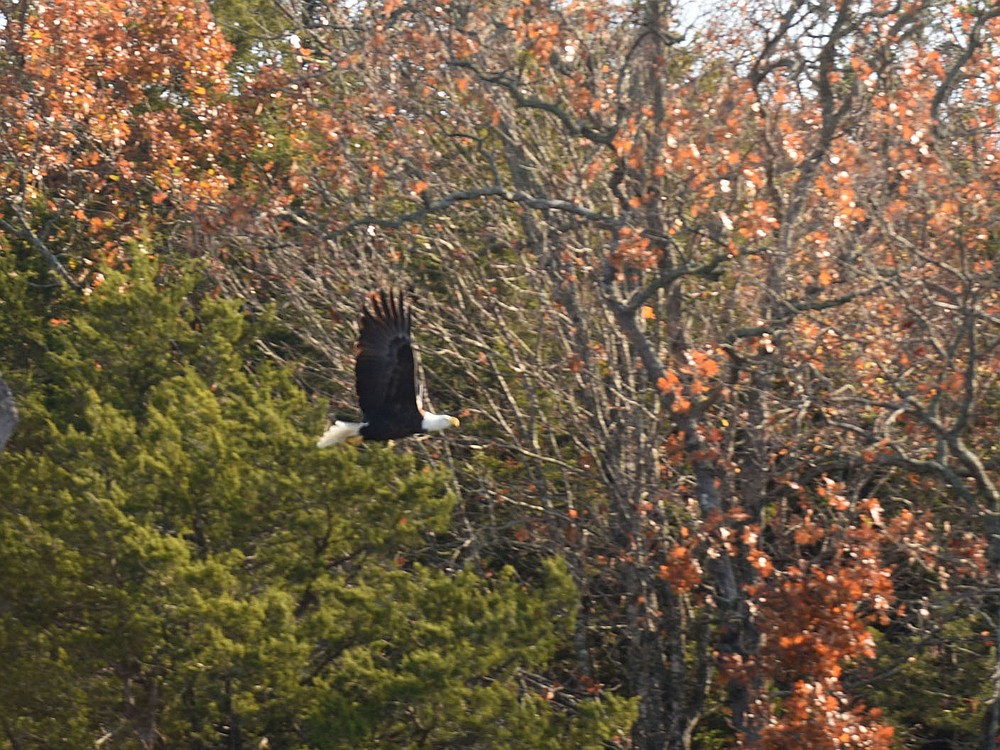 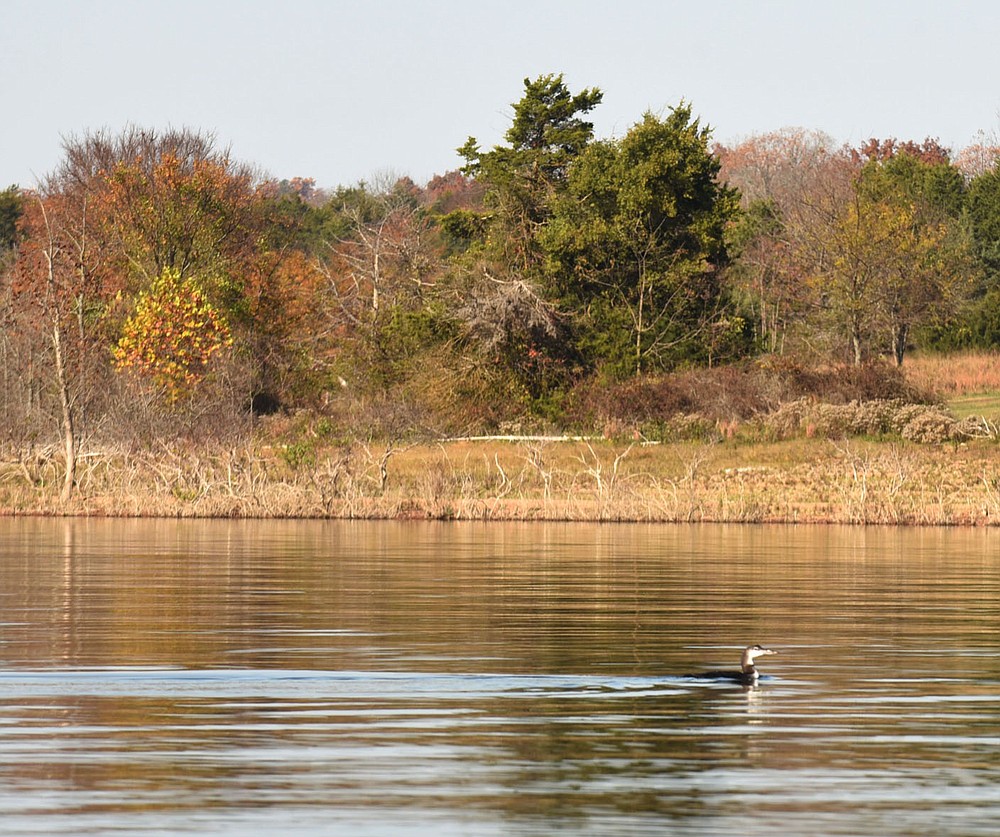 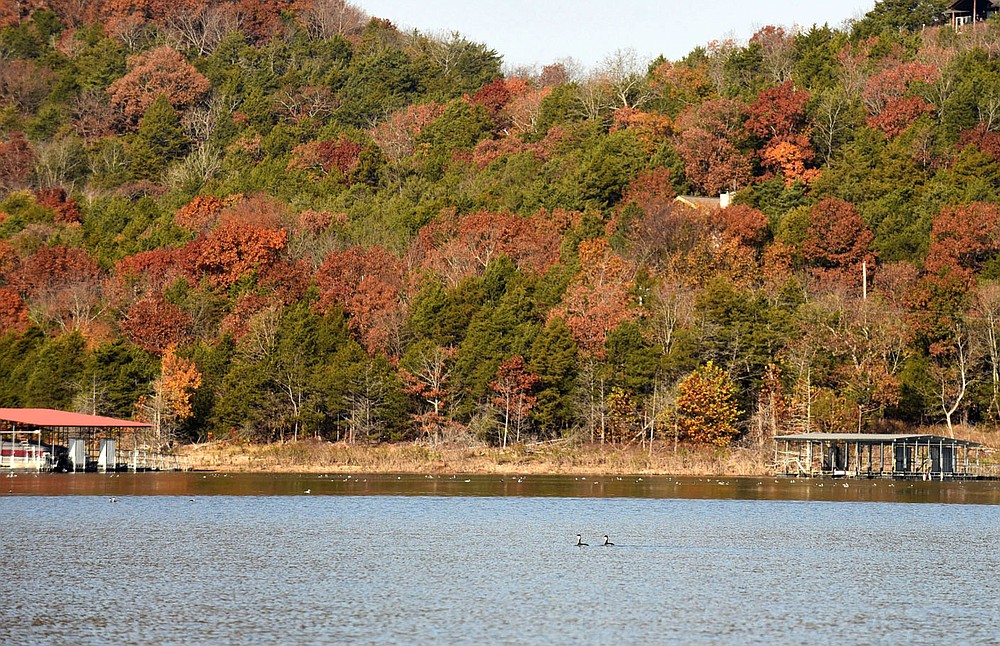 Flocks containing several dozen horned grebes float in leisurely fashion along the north shore of Beaver Lake north of Rocky Branch park. This part of the lake is among the best places in Arkansas to see horned grebes, said Joe Neal with the Northwest Arkansas Audubon Society. A rare western grebe was among this bunch of birds. (NWA Democrat-Gazette/Flip Putthoff) 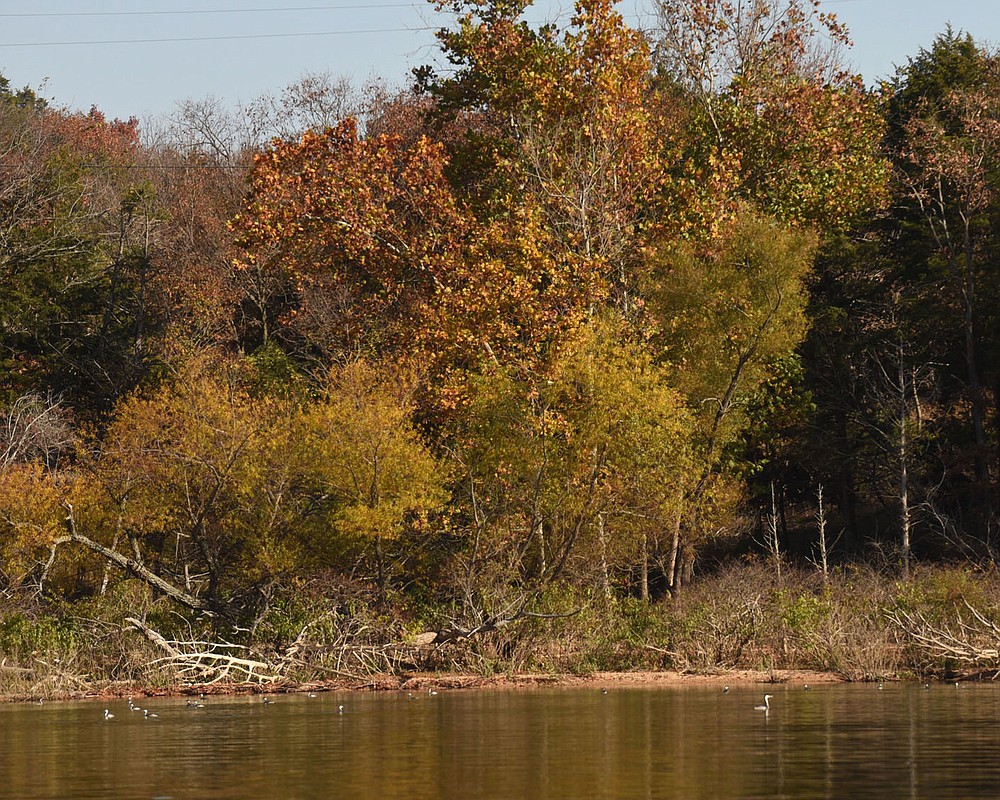 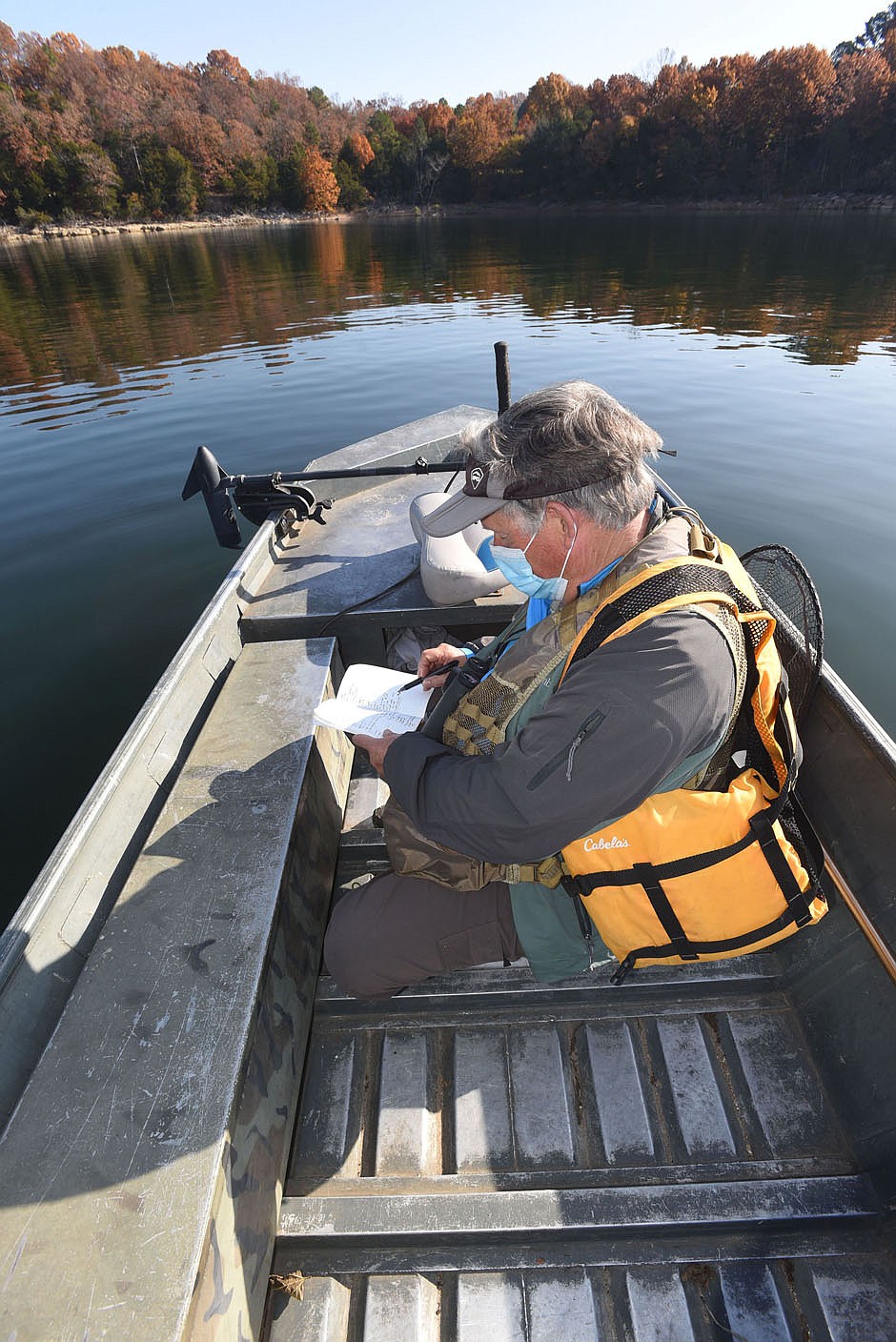 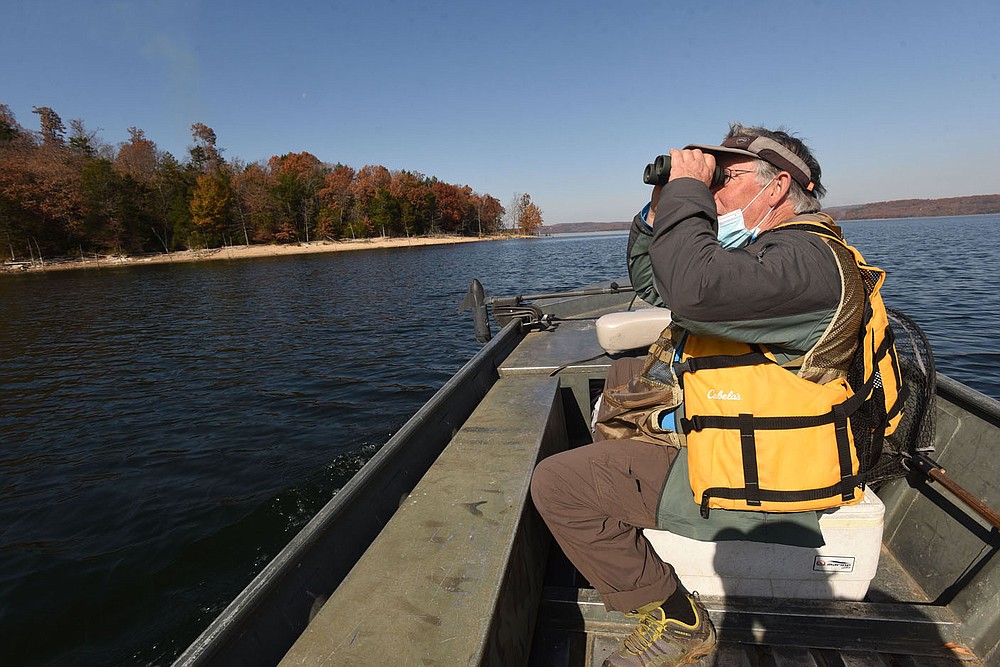 Joe Neal of Fayetteville looks for birds flying high Nov. 6 2020 over Beaver Lake. Neal looked for birds near Rocky Branch park, one of the top birding destinations on the lake. Neal found raptors, waterfowl and songbirds during a morning of birding by boat. Go to nwaonline.com/201208Daily/ to see more photos. (NWA Democrat-Gazette/Flip Putthoff 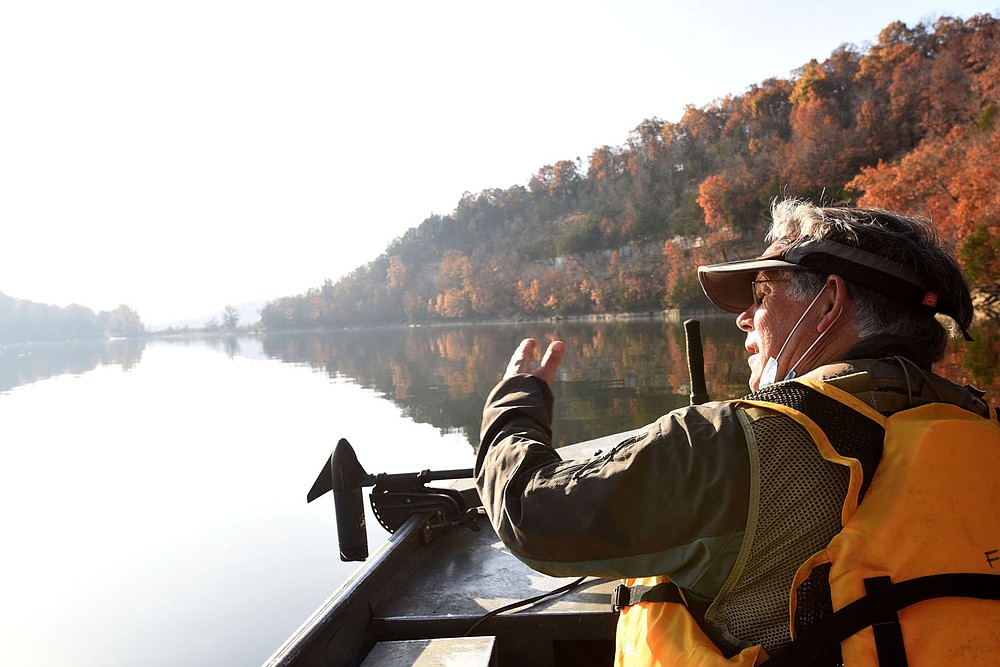 Birds at the lake

Rocky Branch on Beaver Lake is one of the best parks on the lake to see birds. Chances are good to see bald eagles soaring over the water or perched in shoreline trees. Ducks and geese are abundant.

About two miles of paved roads through the park make for easy walking to look for songbirds. The park is a frequent destination for Northwest Arkansas Audubon Society field trips. A $5 day-use fee applies at Rocky Branch and other Army Corps of Engineers parks on Beaver Lake.