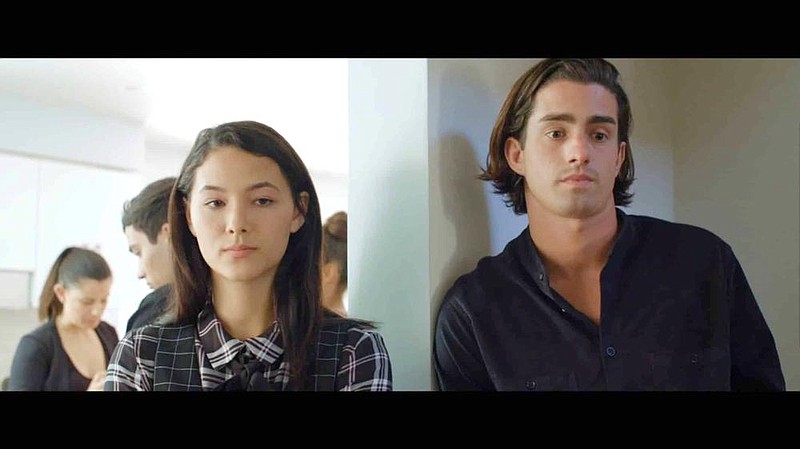 After the sudden death of her best friend, Eva (Fivel Stewart), a straight-A student and obedient daughter, sets out to do some things she never thought she’d be brave enough to do. She’s abetted in her quest by Joey (Andrew Kai), a mysterious, and allegedly “bad” guy she’s crushing on in “The Never List.”

It's sometimes nice to have cartoon alter egos. Eva Jeffries (Fivel Stewart) has created Vicky and Veronica, a pair of fellow teens who trangress in ways she and her own bestie Liz (Brenna D'Amico) would never try.

Despite Eva's fondness for temporary tattoos and bright highlights in her hair, she does little to shake up the world around her. Her goofy dad (Matt Corboy) likes her the way she is, and her domineering mother (Keiko Agena) is set on getting the high school junior into Stanford. Her favorite teacher, Mr. Snyder (Jonathan Bennett), wants her to run for senior president because only the overbearing Ben (Ryan Cargill) has applied.

Eva, who normally does all of her venting through her art (and through on-screen animation) is happy to stand in Liz's shadow, even if Liz is a little shorter. It's no wonder her life is upended when Liz dies.

Throughout their time together, Eva compiled a "never list" of things that Vicky and Veronica would do that she wouldn't. Now, with the encouragement of her less strictly monitored friend Taylor (Anna Grace Barlow), Eva decides that introversion and the rules be damned, she do the things she has never had the courage to do before.

What keeps "The Never List" from being a shallow diversion is that screenwriter Ariadne Shaffer and director Michelle Mower consistently acknowledge that the chemical recreation the two fictional girls engage in sometimes has catastrophic consequences in the real world.

Shaffer and Mower also acknowledge that fellow teens who are unpleasant to the protagonists might not necessarily be heels. Ben is under pressure that Eva's mom would never think of applying to her own offspring.

There aren't any familiar faces in front of the camera, and that's helpful. We don't know what to make of hunky car enthusiast (Andrew Kai) until he has been in the film a little longer. As a result, it's harder to get ahead of the story because we don't have preconceptions of what the characters might do.

It's probably helpful Mower and Shaffer were once teenage girls. "The Never List" has a good deal of nonrepeatable behavior, but the two understand what might lead Eva to abandon caution even if she occasionally has a softer landing that a living person might. That said, it's easier to identify with someone going through the stages of grief even if her father can't remember either the number of or names of said stages.

Showing some of Eva's fantasies is a great touch, and the film might have been more entertaining and even insightful. As Marjane Satrapi's book and film "Persepolis" proves, teenage girls can be observant and thoughtful and might have better ideas than the older men in their lives. Inexperience can often lead to regrettable decisions, but some of us still blunder despite being alive for a long time.

Rating: R, for drug content, sexual material and some language — all involving teenagers