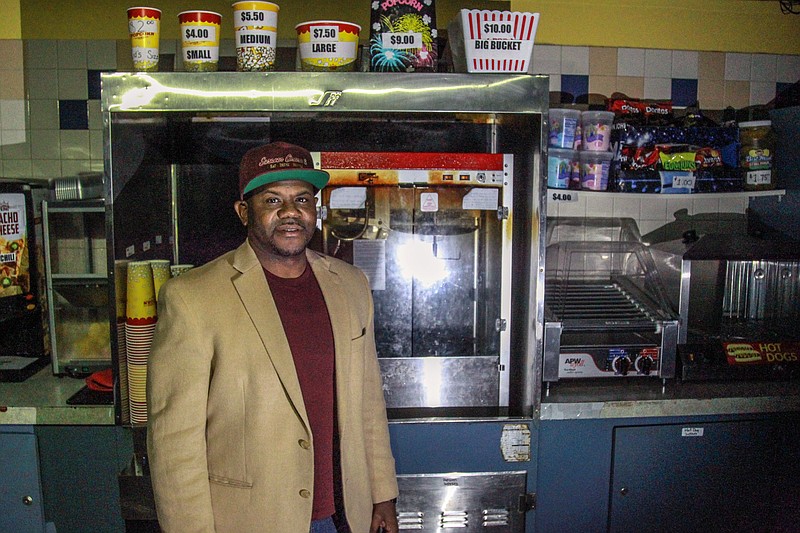 Steven Mays Jr., who, with his business partner, Okori Ezieme, owns Saracen 8 Cinema at the Pines Mall, stands in the darkened concession area of the theater, which has been closed since March 15 of this year, initially due to the coronavirus shutdown but subsequently due to a legal dispute with mall owner Judy Vu and her family. (Pine Bluff Commercial/Dale Ellis)

The status of Saracen Cinema 8, housed in the former Pines Cinema 8 at The Pines mall, remains unclear as the theater has been closed for nine months while the owners of the cinema attempt to navigate a legal tangle with the owners of the mall. A hearing is scheduled for Jan. 15 in Jefferson County Circuit Court to consider a lawsuit that has been working its way through the legal system.

On May 19, 2020, Rain Investments, represented by Little Rock attorney Verona Swanigan, filed suit in Jefferson County Circuit Court against the Vus for breach of contract for failure to comply with maintenance requirements spelled out in the lease agreement.

In the meantime, the future of the multiscreen theater is clouded even further by the news of a larger, more modern multiplex and entertainment venue being planned just a few hundred feet away in the same mall property.

It was announced last week that the former Walmart building, also located in The Pines mall, had been sold at auction to Felix Waller, owner of Apex Cinemas. City officials have said Waller has plans to invest about $8 million in the property to develop it as a multiscreen cinema and entertainment complex.

Steven Mays Jr. of Pine Bluff, and Okori Ezieme of Pasadena, Calif., the principals of Rain Investments in Pine Bluff, the partnership under which Saracen Cinema 8 is owned, both said they are growing more and more frustrated with the current impasse, both in court and with Pine Bluff city officials as well, who they said at best have not been supportive of their venture, and at worst, may have actually helped put them at a competitive disadvantage.

An additional complication was an announcement last June by Thuytien "Judy" Vu, one of the defendants in a lawsuit, that the mall had been forclosed on and returned to the lender, whom she declined to name. Doubts have been raised as to the validity of Vu's announcement, which led to a further delay in court while that issue is settled.

Along with Vu, John and James Vu are also named as defendants in the lawsuit, which accuses the three of breach of contract for failure comply with the terms of a 35-year lease agreement signed June 27, 2019. The lawsuit alleges the Vus have not arranged for agreed-upon maintenance and inspections to be performed among other issues, including building access.

Currently, electricity to the cinema has been disconnected at the transformer, leaving the cinema without power and unable to reopen, and after months of legal proceedings and Vu refusing to comply with court orders, Mays and Ezieme will have to wait at least another month, when the hearing is scheduled on the matter.

A court order issued in August to direct Entergy to switch the utility account from Vu to Rain Investments was never signed, which left Mays and Ezieme without legal recourse to request the switch. According to an August 10 email from Ezieme to Mays and their attorney, Entergy would not make that switch in account owners without the court order.

Both men told the Pine Bluff Commercial that the constant hurdles they have encountered, court delays, a court order drafted but never signed, and the embrace by city officials of Waller's purchase with the intent to put in a competing, as well as larger and newer, cinema in the same building have them concerned that they could stand to lose their investment, which Ezieme said totals close to $1 million.

Saracen Cinema 8 opened for business in September 6, 2019 and remained open until March 15, when it closed due to restrictions put into place to try and mitigate the emerging covid-19 pandemic. Mays said once restrictions were eased, he discovered that he did not have access to the main entrance or the roof and said Vu refused to turn over the keys.

A temporary restraining order issued May 20, 2020 from Circuit Judge Robert Wyatt's court prohibited the Vu's from evicting Rain Investments, ordered rent payments to be made to a trust account, directed that HVAC systems and electrical service be operating and in good order, and directed that a set of keys to the building be made available.

After those orders were not met, a hearing was held Aug. 10 to consider a motion of contempt filed by Swanigan against Judy Vu for failure to comply.

During that hearing, according to the transcript, Vu was ordered to turn over keys to the roof and the main entrance. At the end of the hearing, according to the transcript, Wyatt ordered Vu jailed for contempt and told Swanigan to prepare a new court order showing Vu to be in contempt, ordering her to comply with the court's conditions and directing Entergy to switch the utility account from Vu's name to Rain Investments.

Swanigan said she prepared the order but that Wyatt never signed it, so the order never went into effect, the power was never restored, and the theater never reopened. Then on Sept. 22, Wyatt issued a 30-day stay halting the proceedings until it could be determined if The Pines mall property is in a foreclosure proceeding, saying the court could not make that determination.

Swanigan said she believes Wyatt issued the stay to block an attempt by her to file a motion for summary judgment in an effort to bring the matter to a resolution.

"Instead of signing the order he issued an order to stay the proceedings," Swanigan said. "So he stopped me from filing the motion for summary judgment and issued the order staying the proceedings, making it so that he didn't have to sign the court order."

Swanigan said she had never seen a judge stay proceedings in that manner and could not say why the Aug. 10 court order was never signed or why the stay was issued in that manner. But without that signed court order, she said, no legal means exists to get Entergy to switch the utility account, which leaves her clients unable to reopen. She said to date, she has received no explanation as to why the order has not been signed.

"Every time we've asked for it to be signed we just get told the judge won't sign it," she said. "There's always another excuse."

Mays said all he needs to be able to reopen is for the power to be restored, at which time he said he can arrange for any needed cleaning, restocking, and maintenance issues to be addressed.

"I can be open within days of getting that court order from August signed," he said. "But we can't get it signed. Without it, there's nothing we can do but wait until Jan. 15."