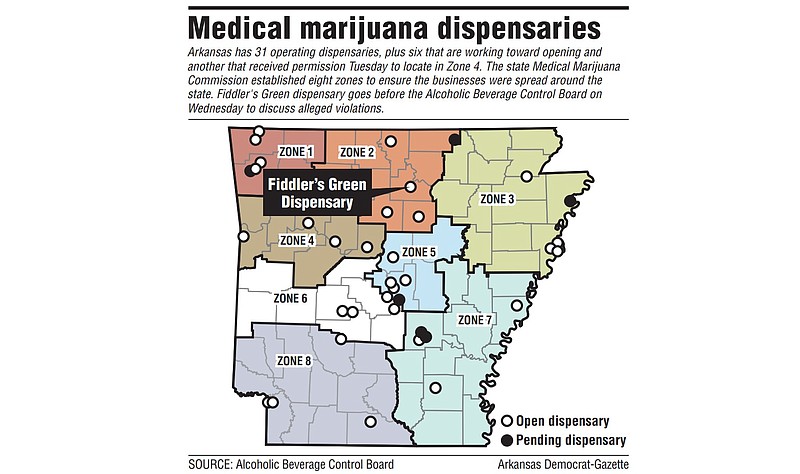 A map of the state's marijuana zones shows the location of Fiddler's Green Dispensary.

A state board this week will hear the appeal of a north Arkansas medical-marijuana dispensary accused by regulators of violations in its operations.

Fiddler's Green of Mountain View has been charged by Alcoholic Beverage Control with eight rule violations, including failure to properly label medical cannabis and keep harvested medical cannabis in a secured safe.

The facility is set to be fined $4,085 and be put on probation for 120 days. None of the violations rose to a level for the business to be suspended or for the license to be revoked, according to Scott Hardin, spokesman for the Arkansas Department of Finance and Administration.

"Any violation is serious, but these don't rise to the level of suspension," Hardin said.

Fiddler's Green CEO Lisa Murphy said by phone Thursday that she hoped the dispensary would be proved innocent.

The violations state inspectors found were:

• Failure to keep harvested cannabis in a secured safe.

• Advertising and marketing medical cannabis with none of the required disclosure statements.

• Failure to properly dispose of litter and waste.

• Failure to label medical cannabis to patients in compliance with the Arkansas Department of Health.

Hardin said the dispensary had some phone cases with the company logo that were hidden from view when inspectors were present, a violation of the state's advertising policy for medical marijuana, but is now in contact and cooperating with Alcoholic Beverage Control.

At Wednesday's meeting, the Alcoholic Beverage Control board of commissioners will go over the violations and could reduce the fine or increase it based on their findings, Hardin said.

The meeting will mark only the second time that a medical-marijuana company in Arkansas has appealed violations to the Alcoholic Beverage Control board of commissioners. The first growing permits were issued in July 2018, and the first dispensary licenses were issued in January 2019.

The board upheld two violations for Green Springs Medical, a dispensary in Hot Springs, in February. The business had to pay a $1,000 fine.

Other dispensaries have had violations and not appealed them, Hardin said.

While the Arkansas Medical Marijuana Commission awards licenses to dispensaries and cultivators, Alcoholic Beverage Control is responsible for overseeing the regulation of medical-marijuana businesses.

Amendment 98, the constitutional change approved by Arkansas voters in 2016, allowed the Medical Marijuana Commission to set the rules under which medical-marijuana cultivation facilities and dispensaries must operate.

According to numbers provided by the Arkansas Department of Finance and Administration on Nov. 25, Fiddler's Green has sold 1,581.71 pounds of medical marijuana since the dispensary first opened July 11, 2019, making it the ninth-highest-selling dispensary of the 31 currently in operation in the state.

For medical-marijuana patients in Mountain View, the other nearest dispensaries range from about 35 to 50 miles away. There are four dispensaries operating in the north Arkansas Zone 2, with a fifth working toward opening in Hardy.

The meeting is scheduled for 9 a.m. Wednesday and can be viewed by the public at myarkansaspbs.org/arcan.