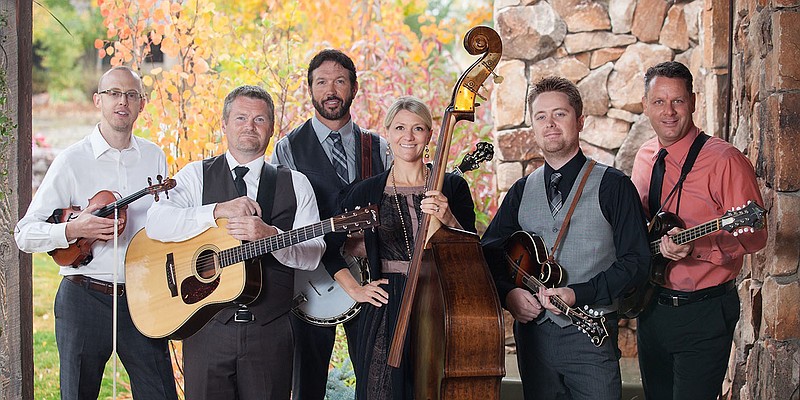 Springdale native Andrea Ivey Banner (center) and her band, Cold Creek, got to perform with the Mormon Tabernacle Choir for a Christmas show. Hosts were Richard Thomas — John-Boy from “The Waltons” — and Kelli O’Hara. (Courtesy Photo)

There's never a dull moment in life for Highland, Utah, resident Andrea Ivey Banner. In fact, she describes herself as a "full-time wife, mother and musician" with an exclamation point! But she enjoyed a rare honor in 2019. She and her band, Cold Creek, were invited to perform "Christmas Day in the Morning" with The Choir at Temple Square -- better known as the Mormon Tabernacle Choir. And audiences can see the performance now, along with behind-the-scenes clips, at pbs.org.

If Banner's name sounds familiar as Andrea Ivey, it's because she participated in band, choir and theater at Springdale High School, graduating in 1995. Then she moved to Provo, Utah, to attend Brigham Young University, and that's where the seeds for Cold Creek were planted.

"While at BYU, I was drawn to the Folk Music Ensemble in the music department," she explains. "I had never seen anything like it in the various schools in Arkansas that I had looked at. And I was attracted to the uniqueness of it. It consisted of small ensembles that studied and performed American and international folk music styles. It spoke to me because my own family loved to listen to and play bluegrass, gospel, folk and country music. So I was very comfortable singing and performing in these styles."

"It has also given me the chance to develop lasting friendships with many like-minded musicians," she says. "The core of my band consists of friends from the ensembles who had graduated but still wanted to play and perform. So some of us have literally been playing together for almost 25 years."

Richard Elliott, the principal organist for The Tabernacle Choir, had heard Cold Creek play and invited the band to join in on "his big solo number."

"It was such an amazing experience, musically speaking, to collaborate with him and the world famous pipe organ of the Church of Jesus Christ of Latter-Day Saints Conference Center," Banner says. "It was also fabulous to get to perform for over 60,000 people over three nights in one of the world's largest theater-style auditoriums in the world. The acoustics were unreal! And of course the opportunity to be surrounded by the caliber of professionalism and musicianship that is the world-famous Mormon Tabernacle Choir will definitely go down as one of my best gigs EVER."

The annual show is released to the public a year later, Banner explains, and is available on DVD, with a few fun extras -- "interviews and backstage footage of Cold Creek jamming together as well as our impromptu performances for the choir, orchestra, cast and crew members," Banner says.

It's a nice reminder for Banner and her band that life as musicians will eventually return to normal.

"Covid has stopped my musical performances dead in their tracks," she laments. "Typically Cold Creek plays four to eight times per month during our late spring, summer and early fall performance season. We are definitely looking forward to 2021 and hopefully getting back to social gatherings and live musical performances!"

‘Christmas With The Tabernacle Choir’

A DVD is also available at pbs.org.

Listen to more of Cold Creek at coldcreekband.com.