Focus on states, Congress in bid for eviction bans 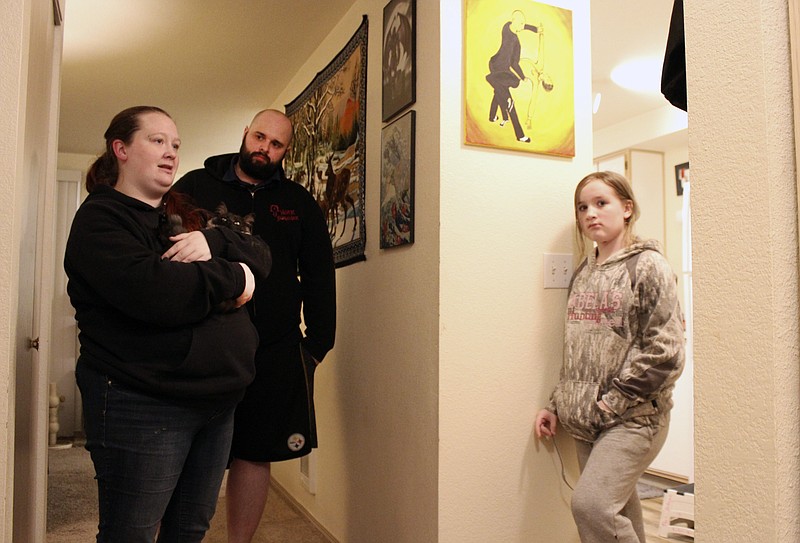 Taylor Wood and her boyfriend, Ryan Bowser, talk to Wood's 10-year-old daughter, Freya Wood, in their Corvallis, Ore., apartment on Dec. 11, 2020. The family, who has been living in the apartment for over two years, has missed three rent payments during the pandemic. (AP Photo/Sara Cline)

CORVALLIS, Ore. -- States and cities that granted renters a reprieve amid the coronavirus-battered economy are now wrestling with what comes next as eviction moratoriums are set to expire.

While states like Oregon and California are trying to pass much longer moratoriums, some don't have more protections in the works.

"This has the potential of being the biggest housing crisis of our lifetime," said David Dworkin, president and CEO of the National Housing Conference, a nonprofit dedicated to affordable housing for all Americans.

About one-third of U.S. households say they're behind on rent or mortgage payments and likely to face eviction or foreclosure in the next two months, according to data collected by the U.S. Census Bureau.

Eyes are on congressional leaders who are closing in on a covid-19 relief package, including an extension of the federal eviction moratorium until February and $25 billion in rental assistance as well as a new round of stimulus checks, bonus unemployment benefits and many other efforts to deliver aid.

Eviction moratoriums instituted by 44 states beginning in March have mostly expired. In response, the Centers for Disease Control and Prevention issued the federal moratorium in September that broadly prevents evictions through the end of 2020. The nationwide directive was seen as the best hope to prevent more than 23 million renters from being displaced.

Now, some states want to extend eviction bans further than the federal government. Lawmakers in heavily Democratic California are proposing their moratorium last until 2022, as long as renters pay at least 25% of their rent and attest to financial hardship.

And a six-month extension is the top issue for the Democratic-led Oregon Legislature in a special session Monday. Its one of 15 states where eviction moratoriums are now in place through year's end, according to the Eviction Lab at Princeton University.

"The consequences of not acting before the expiration of the eviction moratorium would be catastrophic," said Rep. Julie Fahey, a Democrat from the city of Eugene who helped write the proposal.

A main sticking point is that for landlords to receive back rent through a proposed compensation fund, they must forgo 20% of past-due payments. A Republican leader called it "dramatically unfair."

"It's not right to tell [landlords] that they have to pay to get support when the government is the one who asked them to share this responsibility and bear this burden to keep renters housed, which they have done that," said Rep. Christine Drazan, leader of the House Republican Caucus.

Democratic Senate President Peter Courtney said there will be "some concerns, but I am convinced that we will pass something."

While moratoriums have helped people stay in their homes during the pandemic, experts warn that extending them isn't a long-term solution.

"This is just kicking the can down the road, because it doesn't actually pay the rent," Dworkin said. "If a tenant cannot afford to pay three months of rent or one month of rent, then they are not going to be able to pay nine or 12 months of rent -- and they are eventually going to get evicted unless we pay their rent."

He suggests states fund efforts that cover both rent and back payments for landlords. Through October, the National Low Income Housing Coalition estimated states and cities have set aside over $4 billion for rental assistance -- far less than what they say is needed.

Like Oregon, Hawaii, Nebraska and New Jersey are among those offering payments to landlords for missed rent.

But with states' tax revenue shrinking during the pandemic and recession, expensive efforts to combat the eviction crisis are further straining resources.

"States are under severe stress themselves financially," Dworkin said. "In many ways, the states are being put in the situation of robbing Peter to pay Paul."

Ryan Bowser, who lives in an apartment in Oregon with his pregnant girlfriend and her 10-year-old daughter, said delays by lawmakers, locally and nationally, have crippled his family.

"All [lawmakers] have to do right now in this situation is the bare minimum to keep people in their homes," Bowser said.

He and his girlfriend, Taylor Wood, have closely followed updates on possible extensions to state and federal moratoriums as they debate which bills to pay that month and which necessities to sacrifice.

"It's frustrating, and I know we are not the only people in this situation -- there are thousands like us," Wood said. "I just keep thinking, 'Well, [lawmakers] won't just let us go homeless ... right?'" 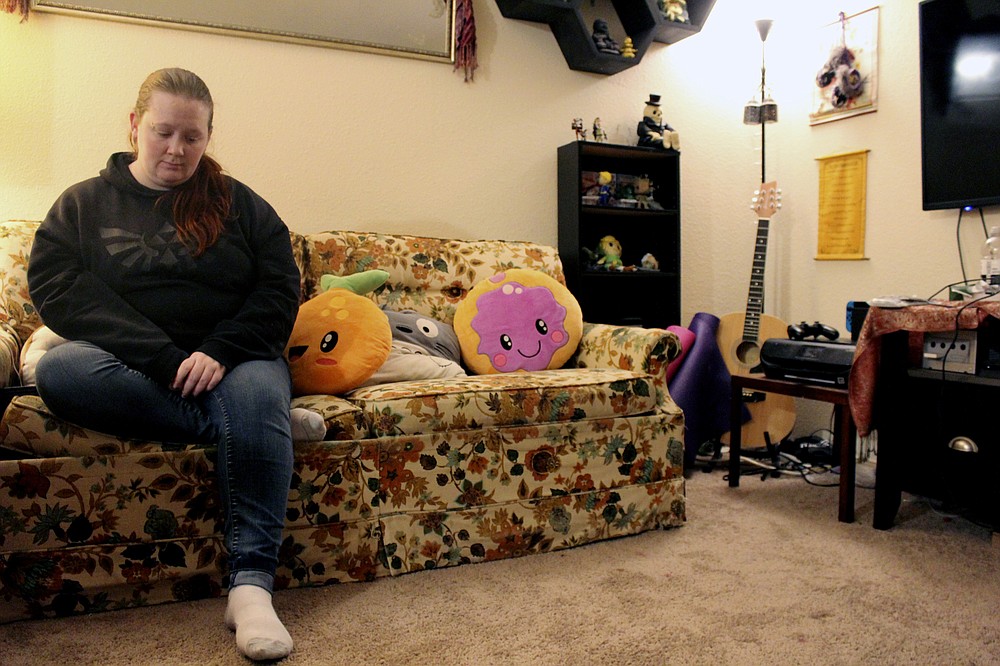 Taylor Wood sits on the couch in her Corvallis, Ore., apartment on Dec. 11, 2020. The Oregon native, who is 10 weeks pregnant, has not been able to get much sleep as she stresses about finances during the pandemic. (AP Photo/Sara Cline) 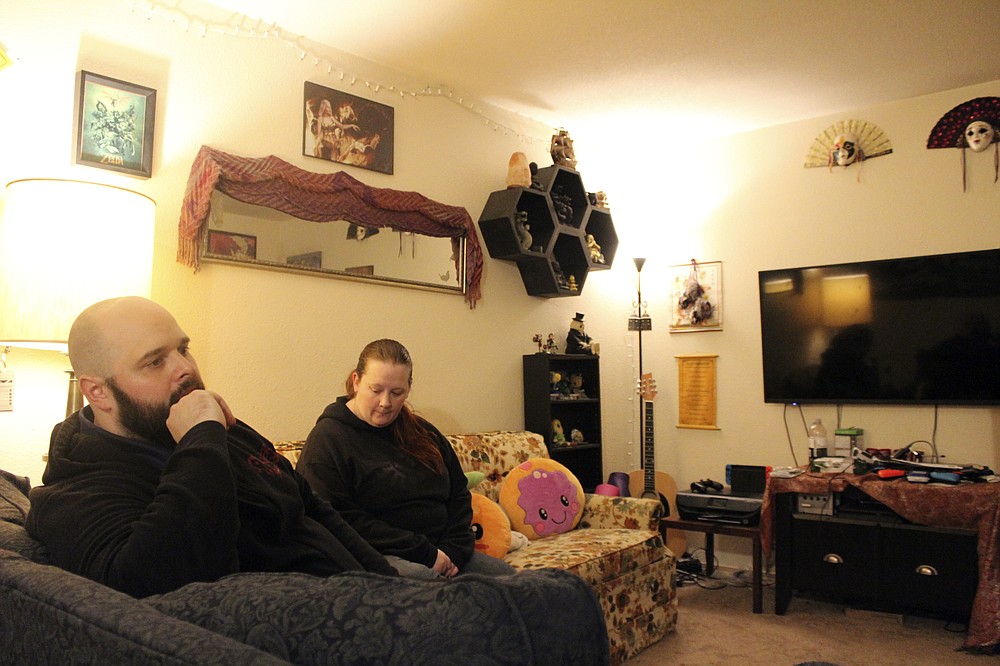 Taylor Wood and her boyfriend, Ryan Bowser, talk about their financial situation inside their Corvallis, Ore., apartment on Dec. 11, 2020. The family is unsure where they will go if an eviction moratorium is not extended and they are kicked out of their home. (AP Photo/Sara Cline) 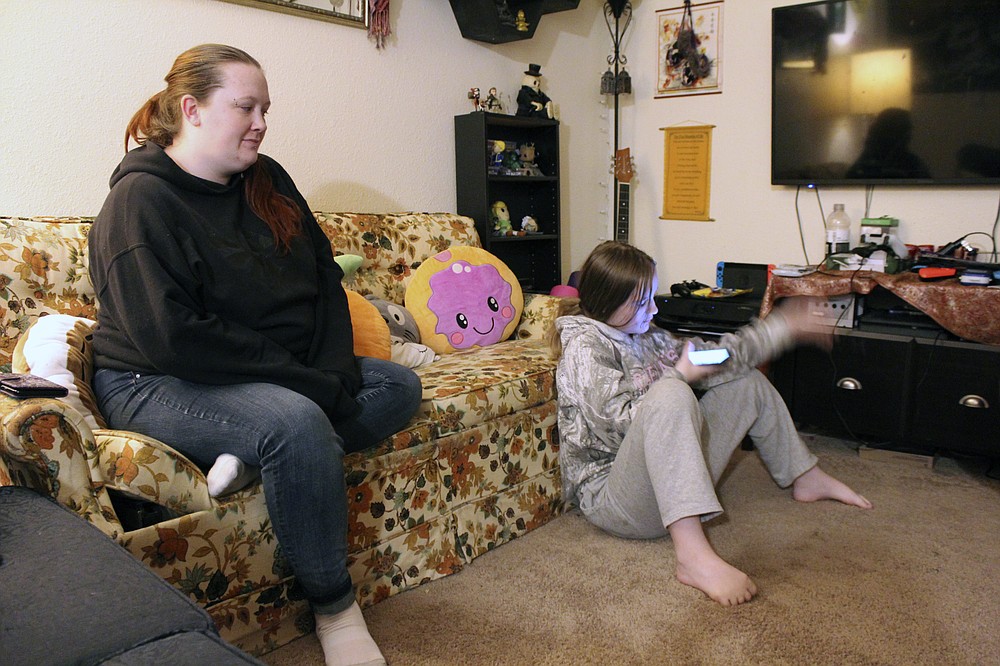 Taylor Wood sits next to her 10-year-old daughter, Freya Wood, in their Corvallis, Ore., apartment on Dec. 11, 2020. The family has missed three months of rent payments during the pandemic and faces eviction if a moratorium is not extended. (AP Photo/Sara Cline)
ADVERTISEMENT