It stresses economic independence amid U.S. tensions by JOE MCDONALD THE ASSOCIATED PRESS | December 19, 2020 at 2:07 a.m. 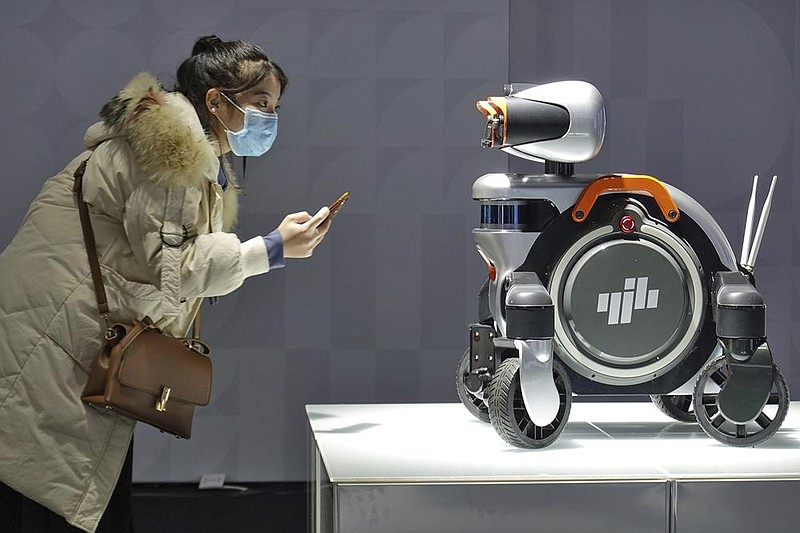 A woman checks out a model of a patrol robot at the World Industrial Design Conference in Yantai in eastern China’s Shandong Province in late November. The ruling Communist Party on Friday called for faster technology development to increase China’s economic independence amid tension with Washington that has disrupted access to computer chips and other high-tech components. (AP file photo)

BEIJING -- China's ruling Communist Party called Friday for faster technology development to increase the country's economic independence amid tensions with Washington that have disrupted access to computer chips and other high-tech components.

China also needs to improve control over its industrial supply chains and increase consumer demand to support self-sustaining economic growth, party leaders said in a statement after a meeting to set economic priorities for the coming year.

President Xi Jinping's government is showing increasing urgency about developing Chinese competitors in electric cars, telecoms, biotech and other fields as a path to prosperity and global influence. The ruling party wants to reduce reliance on foreign suppliers, which it sees as a strategic weakness.

Beijing has spent heavily over the past two decades on tech development. It has stepped up its emphasis on those efforts in the face of the conflict with the Trump administration, which has cut off access to U.S. technology and markets for some Chinese companies on security grounds.

The top priority is to "strengthen national strategic science and technology power," said the statement issued after the Central Economic Work Conference.

It noted that China is on track to be the only major economy to grow this year after the coronavirus pandemic but said its recovery is "not yet solid." The announcement said nothing about China's feud with the United States over technology and security.

The party leaders called for a 10-year "action plan" to create research and development centers, and a "national team" of universities and other institutions. They said companies will be encouraged to form "innovation clubs."

Technology is a cornerstone of the ruling party's marathon campaign to promote self-sustaining growth powered by domestic consumer spending instead of trade and investment, and to build a "moderately prosperous society."

China's factories assemble most of the world's smartphones, personal computers and consumer electronics but need U.S., European and Japanese processor chips and other components.

The Trump administration has cut off access to most U.S. chips and other technology for telecom equipment giant Huawei Technologies Ltd., China's first global tech brand. Last month, Huawei sold its budget-price Honor smartphone unit, one of the world's top-selling brands, in an attempt to rescue it from the sanctions on the parent company.

Communist leaders are especially worried about reliance on U.S. processor chips for smartphones, electric cars and other technologies. Semiconductors are China's biggest import by value, ahead of crude oil.

Friday's statement also called for enhancing the "independent controllability" of the industrial supply chain, or the flow of components through China's vast manufacturing industries. It called for efforts to lay a foundation for China to supply more of its own basic materials but gave no details.

The party also called for increasing domestic demand as "an important support for building a new development pattern." It promised to promote "common prosperity" and improve medical services and care for the elderly.