Florida wants pesky python on the menu, if safe 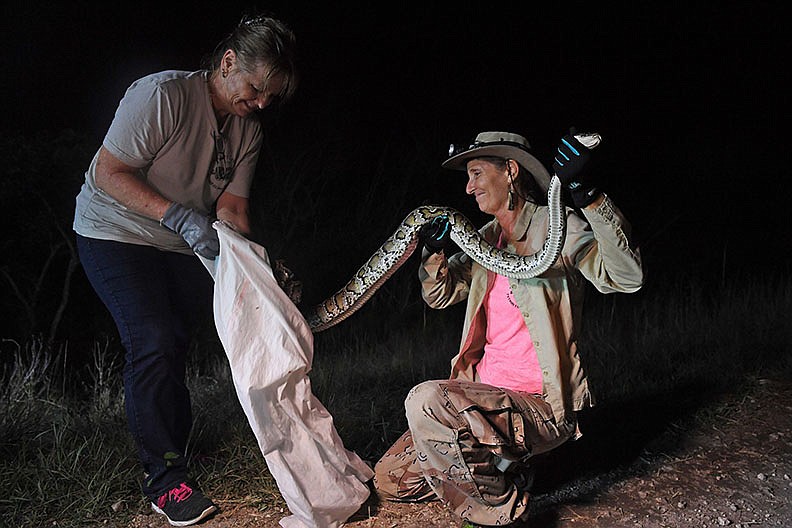 Donna Kalil (right) and Renee Yousefi bag an 8-foot Burmese python along the C-304 levee in Miami-Dade County in July 2018.

FORT LAUDERDALE, Fla. -- Donna Kalil estimates she's eaten a dozen pythons in the past three years or so.

That's not including the python jerky, says Kalil, a python hunter for the South Florida Water Management District. "I eat that several times a week because I take it out with me on python hunts, and I eat it out there."

State officials would like to see more people like Kalil putting pythons on the menu -- not because of their nutritional value but as another way to encourage hunting to control the snakes' population.

Burmese pythons are considered an invasive species in Florida. The voracious appetite of these apex predators disrupts the food chain in environmentally fragile areas like the Everglades. Believed to have begun their Florida invasion after owners released them into the wild, python numbers have boomed and the state has struggled to rein them in.

"We would like to use consumption as another way to encourage people to remove pythons in Florida if the meat is safe to eat," Carli Segelson, a spokeswoman for the Florida Fish and Wildlife Conservation Commission, wrote in an email. "The study will help ensure that is safe."

Other invasive species are consumed -- most notably lionfish -- as a way to control their populations. Some people even eat iguanas.

But there's a concern about eating pythons, and it's one the state has started to research: The gargantuan snakes, like some fish, could be full of mercury, a neurotoxin that is dangerous to humans.

That's why the Florida Department of Health is working with the Florida Fish and Wildlife Conservation Commission to conduct tissue samples on pythons to determine whether they contain too much mercury for human consumption.

If the levels are safe, new entries are going into the Florida invasive species cookbook.

Python is good in chili -- or so Kalil says. She also likes it in stir fry.

But her favorite way to eat python is to pressure cook it for 10 or 15 minutes, saute it with onions and garlic, and add it to pasta and sauce.

Kalil, a Miami native who gave up her real estate job to hunt pythons full time, said the meat is rubbery and tough if you don't prepare it properly. The pressure cooker makes it more tender, she said.

And the taste? "I don't really want to say like fish because it is more the texture of fish," Kalil said, "but it definitely does not taste anything like fish, it tastes more like chicken."

Or, maybe, another white meat. "I'm going to say pork," she said. "More like a pork chop maybe."

The Environmental Protection Agency and the Food and Drug Administration say the safe limit for mercury is 0.3 parts per million. Some of the Everglades pythons registered more than 100 times that.

More recently, a study found pythons in southwest Florida near and just north of Naples had concentrations of less than 5 ppm.

"We have one of the worst mercury problems in the world in the Everglades and South Florida," said Rumbold, who was among the study's authors.

Rainfall carries pollutants from the air to the ground, and marshes in the Everglades convert the mercury into a form that is dangerous for humans.

As the state attempts to find resolution in the mercury problem, the Florida Python Challenge, the state's annual hunt that awards cash prizes for the most, largest and heaviest pythons caught, is being squeezed out of its usual January starting date.

The delay is to maximize the number of snakes captured, Segelson said, and also to try to keep hunters safe from the coronavirus threat.

"The winter months are a good time to capture pythons," Segelson said. "However, we have also seen great success in the summer when pythons' nests are hatching and are more likely to be found together in greater numbers. Covid was also a consideration when making this decision."

The state hasn't yet announced when the 2021 Python Challenge will begin.

Florida's python hunters work mostly in the Everglades. And it's not an especially lucrative job.

Kalil, the state's first certified female python hunter, got her start when the state-sponsored python hunts began in March 2017. She said she's not concerned about the delayed start of the hunt this year.

"These last nine pythons that I caught actually took me nearly a month to catch," she said. "It definitely has slowed down. It always does this time of year. They stop moving around as much because of the cold."

Among those nine pythons, Kalil said, she'll make jerky out of five or six.

"It's a wonderful tasting meat," she said. "But it is limiting."

That's even true in her house. Her husband won't eat her python pasta.

Kalil started eating pythons because they were the only animal that she caught but didn't eat. She knew there was a mercury risk so her daughter, who is a vegetarian, bought her a mercury-testing kit. The biggest pythons tested positive so she didn't eat them.

Even today she won't eat pythons more than 7.5 feet long because she thinks there's a bigger mercury danger in snakes that size.

For preparation, Kalil filets the python (you've got to go slowly cut off the sinew) and chops up the meat.

A 7.5-foot python generally yields a 5-foot-long filet and 3 to 4 pounds of meat.

"To put it on a plate like sauteed or whatnot in one piece would look sort of interesting," she said.

To make jerky, Kalil marinates the python meat in mojo sauce overnight and then puts in the dehydrator for 12 to 15 hours.

The state is now working to develop guidelines for safely eating pythons, and Kalil is "thrilled" about the efforts.

"If they're finding really high level of mercury in specific areas ... that means there's something going on with our environment," she said. "And wouldn't it be wonderful to use the pythons to determine where the pollutants are coming from and getting into the Everglades and be able to shut that down?"

As for the idea of eating pythons, well, clearly Kalil likes that, too.

She's eaten three of Florida's most popular invasive species -- lionfish, iguana and python. Lionfish is her favorite, followed by iguana, and then python.

And she encourages more people to give it a try.

"If you could do the trifecta of all three," she reasoned, "you could help the environment and still have some meat on your table."