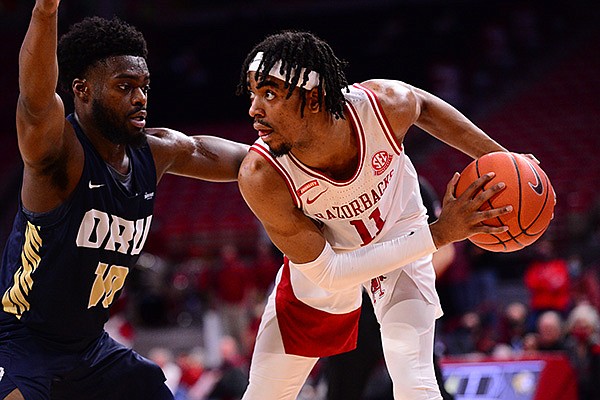 FAYETTEVILLE — Justin Smith scored 22 points with a career-high 17 rebounds and Arkansas had a big second half to beat Oral Roberts 87-76 on Sunday.

More from Arkansas' win over ORU

Leading 82-74 with 84 seconds left, Arkansas' Desi Sills fouled Francis Lacis on his 3-point shot attempt to send him to the foul line. Lacis converted two of three shots making it a two possession contest. Jalen Tate grabbed the defensive rebound on Lacis' miss, got the ball to JD Notae who fed Smith on the break for a dunk to seal it. Notae sank a pair of free throws on Arkansas next possession for a 10-point lead with 47 seconds left.

After the break, Arkansas settled down and used its size advantage to take control of the interior and made 20 of 37 and shot just eight 3s. Moses Moody scored 18 points, Sills scored 16 with 10 rebounds and Notae scored 15.

Arkansas trailed by as many as 12 points after halftime, but the Razorbacks rallied offensively in the second half to grab win No. 7 of the season in Bud Walton Arena.

Graduate transfer forward Justin Smith led Arkansas with 22 points and 17 rebounds - 10 offensive. Freshman guard Moses Moody added 18 and Desi Sills finished with 16, and JD Notae pitched in 15 off the bench - all in the second half.

Arkansas has one nonconference game remaining before opening SEC play on Dec. 30 at Auburn. The Razorbacks host Abilene Christian on Tuesday at 4 p.m.

We will have more from today's game later on WholeHogSports.com.

The Razorbacks seem to be in fairly firm control of this one. Desi Sills just drove the lane from the right corner and got fouled attempting a tough layup. He'll be at the line when play resumes.

Sills has a 14-point, 10-rebound double-double today. The 10 rebounds are a career-high.

Max Abmas has nine points on 3 of 10 shooting.

Justin Smith is having an incredible day on the glass.

He has scored a game-high 16 points and grabbed 14 rebounds, including eight on the offensive end. He is 6 of 17 from the floor, but the Razorbacks wouldn't be in this one without his efforts on the boards.

Moses Moody has come alive in the second half, adding eight points, and JD Notae has nine points - all since the break.

Eric Musselman is running the Tate-Sills-Moody-Notae-Smith lineup a lot in the second half. Davonte Davis has also provided solid minutes.

Max Abmas has not had the best day scoring the ball, but he's got five in the last couple of minutes to lift ORU. He finished an uncontested layup when Arkansas applied some backcourt pressure. He then hit a deep 3 from the top of the key. He has eight points on 3 of 8 shooting.

Justin Smith is up to 12 points and 13 rebounds. Moses Moody just finished off a missed layup with a tip-slam, and he will be at the line when play resumes.

Eric Musselman was hit with a technical foul prior to the media timeout. Not sure what happened.

The crowd in Bud Walton Arena is finally into this one, and they finally have something to cheer for.

Desi Sills, JD Notae and Jalen Tate have 14 of the Razorbacks' 17 second-half points, and they have brought the Arkansas offense to life since halftime. Sills is two rebounds away from a double-double - 11 points, 8 boards.

A sequence that perfectly sums up this game today for Arkansas just took place. The Razorbacks grabbed an offensive rebound, Desi Sills missed a wide open layup then ORU buried a 3 on the other end. It's been a frustrating day for Eric Musselman.

The Golden Eagles have hit 2 of 3 looks from 3 in the second half while Arkansas is 0 of 3 from deep. Justin Smith has a 12-point, 10-rebound double-double and is the only Razorback in double figures.

Easily the worst half of basketball the Razorbacks have played this season, and they find themselves down double digits at half for the first time.

Arkansas turned the ball over nine times and hit just 12 shots. Justin Smith leads the Razorbacks in scoring with nine, but he is 4 of 13 from the floor, missing on all three of his 3-point attempts and having some trouble finishing around the rim.

He's been great on the glass with eight rebounds - six offensive - but he's been pretty inefficient.

Oral Roberts, though, is playing tough defensively and making things incredibly tough for Arkansas right now. The Razorbacks are 2 of 16 from 3 and scored at a .811 PPP clip in the first half.

ORU leading scorer Max Abmas has just three points on 1 of 5 shooting at the half but the Golden Eagles are in control. Kevin Obanor, ORU's 6-8 forward, leads all scorers with 12 points and seven rebounds. RJ Glasper has eight points on 3 of 5 from the floor.

RJ Glasper, the ORU guard who began his college career as a walk-on at Arkansas, just hit a tough 3 from the left wing as the shot clock expired to push the Golden Eagles' lead to 12. He has eight points to lead ORU today.

The Razorbacks have turned the ball over seven times and made nine shots. Arkansas is 2 of 14 from 3 today. Vance Jackson will be at the line for two shots when play resumes.

RJ Glasper just got to the rim pretty easily on a straight-line drive, giving the Golden Eagles their biggest lead of the afternoon. ORU is on an 8-0 and Eric Musselman just called a rare timeout.

Arkansas is shooting 23% and is 0 of 10 from 3 to this point. Justin Smith is 2 of 9 from the floor and 0 of 3 beyond the arc. I think it's about time he puts the perimeter jumper on the shelf.

Justin Smith added a pair of layups to put the Razorbacks up 12-7, but the Golden Eagles have scored twice on the interior to pull within one at the second media timeout.

RJ Glasper just took an Arkansas defender off the bounce going right and converted a floater. Meanwhile, the Razorbacks have not scored in more than two minutes.

Arkansas is 5 of 20 shooting today and 0 of 5 from deep. This offense needs to wake up. Desi Sills has seven rebounds to lead all players.

Arkansas held an 8-4 lead and Justin Smith violently swatted an ORU layup attempt off the glass, then Desi Sills turned the ball over looking to make an advance pass. The Golden Eagles came back down on a broken floor and got a 3 from the top of the key to fall, setting the current score.

Sills has four points on a pair of layups. He followed a Connor Vanover miss from the right corner with a bucket from point-blank range.

ORU has opened the game 3 of 10 from the floor. Max Abmas is 0 of 1 shooting, missing a deep 3 from the right wing.

Razorbacks off to a solid start on both ends of the floor. Max Abmas has not attempted a shot through two-plus minutes.

Moses Moody has four points to lead the Razorbacks, and Desi Sills added a tough layup against a pair of ORU defenders. Golden Eagles called for time to stop the early run.

This group is plus-41 together over Arkansas' last three games and allowed .60 PPP in that span, according to HoopLens.

Coming into today, the Razorbacks’ defense holds the nation’s sixth-best effective field goal percentage (38.8%) and has limited opponents to 36.9% on 2-point looks. Vanover and Smith have been really solid interior defenders this season. The 7-3 forward has swatted away 15.7% of teams’ shots inside the arc this season.

Moody leads Arkansas in scoring at 16 points per game, and JD Notae, who has come off the bench in each game this season, is second at 13.3 per game. Smith, Sills and Tate are each adding at least 10.5 points per outing as well.

Razorbacks opponents have shot 28.2% from 3-point range this season. They will be tested there today. The Golden Eagles have several players who can fill it up from distance.

ORU enters today’s game 3-4 overall with its four losses coming on the road against Missouri, Wichita State, Oklahoma State and Oklahoma. The Golden Eagles are preparing to play their fourth game in the last eight days. They have wins over Rogers State, Southwestern Christian and Bacone College.

Against the Division I teams ORU has played, it has shot the 3 at a 34.4% clip and hit 81.6% of its free throws. The Golden Eagles have struggled a bit inside the arc, hitting 42.1% of their 2-point attempts. Defensively, they have allowed those four higher-level opponents to grab 37.4% of their missed shots.

Abmas and Obanor are the players to keep a close eye on for ORU. Abmas is an explosive scoring guard who is also the team’s best playmaker. In the Golden Eagles’ toughest four games, he has shot 48.7% from 3-point range and assisted on 42.2% of the team’s scores when on the floor.

Obanor is a handful on the interior, both scoring the ball and on the glass. He can also step out and shoot the 3, hitting 7 of 14 attempts against Wichita State and Oklahoma State. Obanor has grabbed better than 22% of available defensive rebounds.

Glasper began his college career as a walk-on at Arkansas. He has not scored more than nine points against ORU’s better competition this season. He is 3 of 12 from deep in those games.