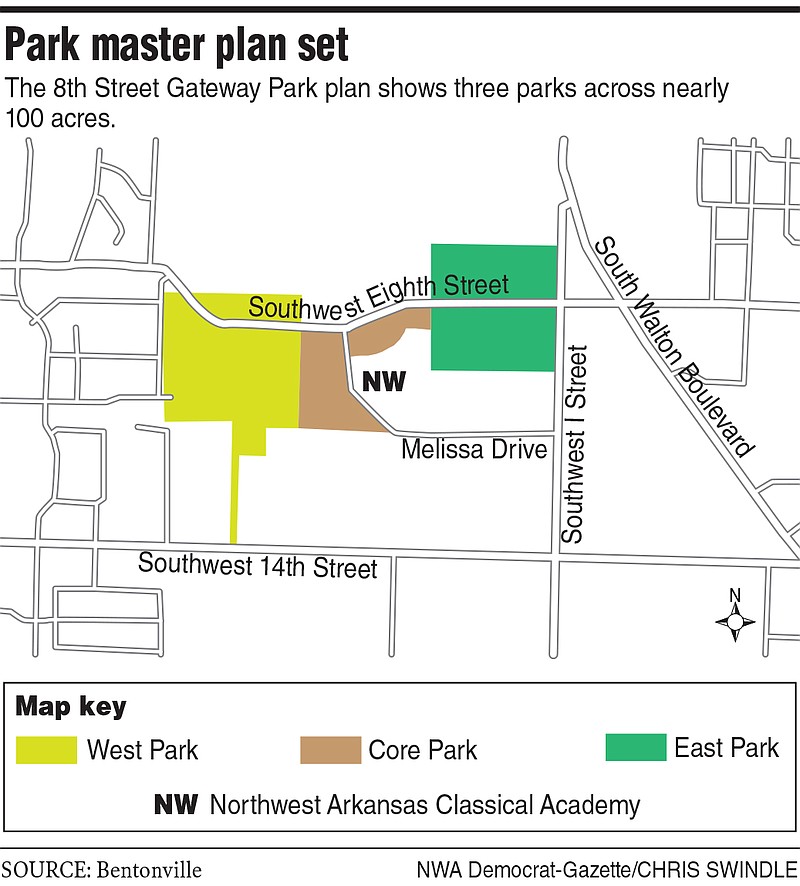 BENTONVILLE -- The 8th Street Gateway Park master plan depicts something that could be "cutting edge," a city official said.

David Wright, Parks and Recreation director, recently took the City Council through the plan that shows three unique areas -- a west park, a park core and an east park.

Walmart donated 75 acres near the intersection of Southwest Eighth and Southwest I streets last December for the park. It will span almost 100 acres when combined with a 23-acre donation from the Walton family, according to news release.

The Parks and Recreation Department solicited public input through site tours, feedback sessions, stakeholder meetings and online surveys to understand the amenities residents want incorporated into the park, according to its website. Things kicked off on a cold Saturday in February when more than 350 people took tours of the site.

The Parks Department worked with Port, a design consulting agency, to create the master plan that focuses on four interrelated aspects -- play, connectivity, ecology and community, according to the Parks website.

Andrew Moddrell, a partner with Port, said earlier this year the park is the first Arkansas project for the company. Port has offices in Chicago and Philadelphia, according to its website.

A common theme among the responses was people wanted a place to gather, Wright said. Some respondents mentioned Gathering Place in Tulsa.

"We heard over and over again, 'We want something like the Gathering Place,'" Wright said. "We have residents who road trip to go there."

The Tulsa park features amenities such as trails, a skate park, BMX pump tracks, restaurants, and stops such as the Spiral Connector, Volcanoville, Fairyland Forest, Skywalk Forest, The Reading Tree, the Ramble Sensory Garden, the Cottonwood Lawn and the Picnic Grove.

Bentonville received a grant through the Walton Family Foundation's Design Excellence Program for the park.

The design for the 8th Street Gateway Park will align with the city master plan, Play Bentonville 2025. The city's park plan highlighted the need for additional passive recreation spaces, public gathering areas, green spaces and trails to the west of Walton Boulevard where 58% of Bentonville residents live, according to information on the Walton Family Foundation website.

"I am excited to have this new park on the west side of Walton Boulevard along the grand trail loop that is being built to run from the northern edge of the city to the southern edge of the city along the western side," Councilman Chris Sooter said. "The park will be a transformational project for the city and will become a destination for outdoor activities for families to gather and spend the day."

The park land is made up of six parcels that feature distinct landscapes, Wright told the council.

The areas nearest to Southwest I Street are mostly wooded. There is rock in some places, and the area to the west looks like it was once agricultural land, Wright said. "There are a lot of different characteristics in that 100 acres," he said.

West park amenities include a running track and areas called The Porch, the Great Lawn and the Hillside Pasture. A hammock grove, a game grove, a picnic grove, a plaza and existing barn are part of The Porch, according to Wright's presentation to the council.

The east park has the Gateway Bridge and canopy walk, a beginner mountain bike skills area, a filtration garden and creek restoration among its amenities.

Highlights of the core park include a 1-acre destination playground, a 2-acre pump track area, a skate park and a central plaza called The Yard, according to the presentation.

"The design firm did an outstanding job of capturing the wants of our citizens, and the park will provide many amenities that do not exist in Bentonville today," Sooter said.

"The reason I say cutting edge is the impact it will have on our community," Wright said. "Look at what Wilson Park means to Fayetteville. The 8th Street Gateway Park will become that to us."

In the past, the mindset with many park departments would have been to build some kind of sports complex on that much acreage. That wasn't the case for this park, Wright said.

"We want it to be a destination area," he said. "Something that appeals to everyone and connects to our other properties. A place where people can come and spend hours or days."

Wright said 80% to 85% of the property will not have specific uses and remain natural with lots of tree canopy.

The City Council has approved an agreement with CEI Engineering for a fee not to exceed of $60,750 for land surveying.

The City Council in November approved a budget adjustment of $1,077,520 for a grant from the Walton Family Foundation for Phase II of design for park.

The Phase II design will consist of schematic design and design development, Wright said. It will be about an eight-month process.

The third and final phase will include construction documents and bidding, Wright said.

It hasn't been decided if the park will be built in one swoop or done in phases. A cost has not been determined but could be in the $20 million range, Wright told the council.

The last Bentonville City Council meeting was held Dec. 8. The next meet will be Jan. 12.