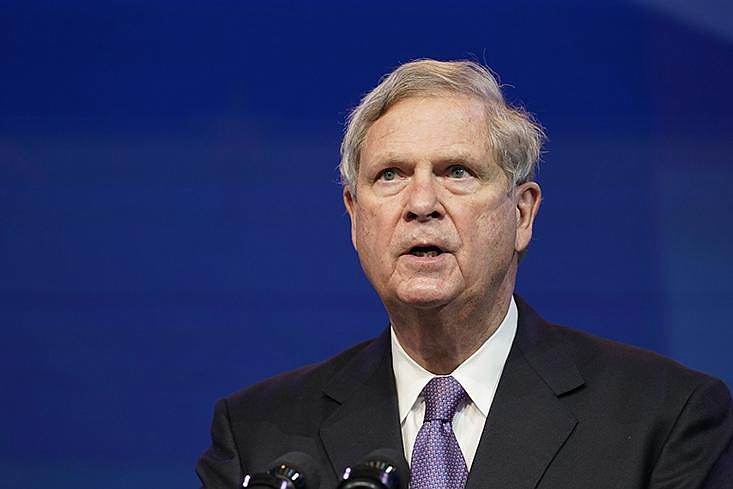 Former Agriculture Secretary Tom Vilsack, who the Biden administration chose to reprise that role, speaks during an event at The Queen theater in Wilmington, Del., Friday, Dec. 11, 2020. (AP Photo/Susan Walsh)

WASHINGTON -- Soon after President-elect Joe Biden's election victory last month, Tom Vilsack, the former agriculture secretary and one of Biden's early backers, received an exasperated call from a former aide. Despite the elation over Biden's victory, Democrats were once again defeated resoundingly in rural America.

"It isn't an overnight problem to be solved," Vilsack said, according to his former deputy chief of staff, Anne MacMillan, who recounted the conversation. "It is a long-term investment in understanding, appreciating and respecting rural America."

This month, Biden put Vilsack in charge of that task, tapping him to reprise the role of agriculture secretary that he held for eight years in the Obama administration and making him the Biden administration's chief emissary to America's farmers. But for a nominee with extensive experience, the pushback against Vilsack has been fierce, laying bare the divisions within the Democratic Party and the resistance to corporate influence that is simmering among progressives.

If confirmed, then Vilsack, a former Iowa governor, will retake the helm of the Agriculture Department at a time when America's farmers have been battered by President Donald Trump's trade wars and the effects of the coronavirus pandemic.

Smaller farms in particular have been hit hard, and farm bankruptcies have increased over the past few years, even with record amounts of federal assistance. Family-owned dairy producers have faced an especially difficult stretch, with prices declining because of an oversupply of milk. In Wisconsin, half of the herds have disappeared in the past 15 years.

Vilsack faces a steep challenge, with progressive and environmental groups arguing that he is too friendly with big industrial agriculture businesses. Furthermore, rural farmers, who voted overwhelmingly for Trump, are wary that more regulations are in store under a Democratic administration.

Farm states have been a stronghold for Republicans over the past decade. And despite some farmers' frustration with Trump over his trade policies, the president still dominated in heavily rural areas in the 2020 election, losing some farm states such as Wisconsin because of the strength of Biden's support in cities and suburbs.

Eager to make inroads in rural America, some Democrats fear that Vilsack is not the ideal ambassador. Critics of Vilsack, who recently earned $1 million a year as a lobbyist for the dairy industry, worry that he will favor big industry over independent farmers and not do enough to ensure worker safety.

Environmental and agricultural policy groups have derided him as being too cozy with big agricultural businesses, pointing to the rapid consolidation in the farm sector that occurred under his watch, when companies such as Monsanto and Bayer merged.

Food safety and labor advocates also criticized his decision as secretary to allow a significant increase in slaughter-line speeds in poultry plants, which can increase the risk of injuries to workers, along with a revamp of the chicken inspection process to allow meatpacking employees to perform some of the duties previously carried out by government inspectors.

"If past is prologue, we have strong concerns that he will continue to do bidding of industry," said Zach Corrigan, a senior staff lawyer at Food & Water Watch, a consumer and environmental watchdog group that opposes Vilsack's nomination.

While many farm groups such as the National Farmers Union and Feeding America have expressed support for the nomination, some farmers are wary that the Biden administration could herald new and onerous regulations.

"Probably more rules instead of less rules," said John Heisdorffer Jr., an Iowa soybean farmer and former president of the American Soybean Association. "In the farming community, it seems like we get ruled to death."

Vilsack has faced particular criticism for the fading fortunes of Black farmers, who have long complained of discrimination when it comes to land and credit access.

Early in the Obama administration, Vilsack vowed to address the struggles of smaller farms and to help lift the broader rural economy.

At that time, Vilsack held a sort of listening tour, making stops in Normal, Ala., to discuss the poultry industry and Fort Collins, Colo., to talk about beef, raising the possibility that President Barack Obama was serious about reining in big agricultural companies and the meat industry.

In the end, Vilsack and Obama's Justice Department did not mount an antitrust effort. "There was nothing," Corrigan said. "It shriveled up and went away."

Vilsack would rejoin the Agriculture Department in a much different climate than there was during his eight years under Obama. The pandemic has put intense focus on the struggles and dangers of employees of meatpacking plants. Thousands of workers became ill with the coronavirus after many plants struggled to take basic precautions to protect them.

In late April, the Trump administration took the unusual step of issuing an executive order that effectively forced meatpacking plants to stay open even if virus cases were rising. The administration said the move was intended to protect the nation's meat supply, which the industry said had been jeopardized by plant closures. So far, though, there has been no evidence of widespread shortages.

"Because of the experience of the pandemic, there are different expectations for the secretary of agriculture than there were during Tom Vilsack's prior service. There must be heightened priority given to the safety and needs of the workers who produce our food supply as well as all to those Americans who face food insecurity," said Stuart Appelbaum, president of the Retail, Wholesale and Department Store Union, which represents poultry workers at plants across the South.