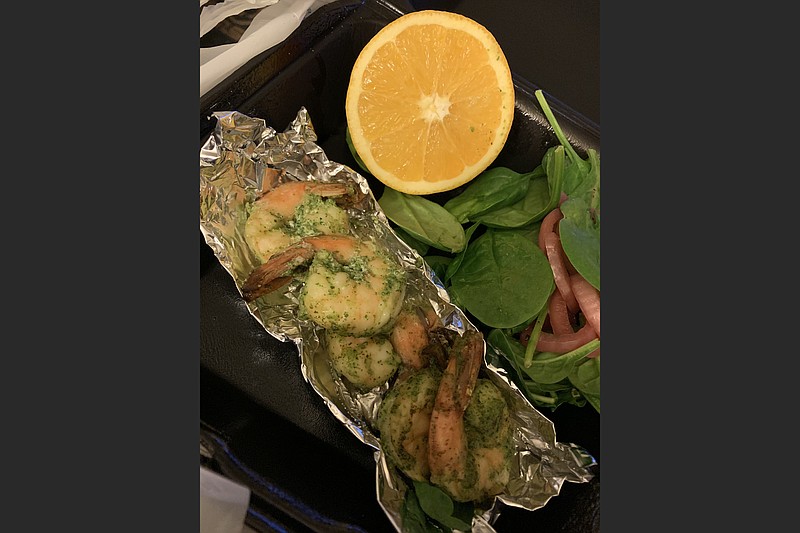 Shrimp Chimichurri from Cannibal and Craft came with a side salad of pickled onion and baby spinach salad plus half an orange. (Arkansas Democrat-Gazette/Eric E. Harrison)

At this festive season of the year, we normally would gather together for feasting, but circumstances this year have made that impractical if not outright dangerous. So we're continuing via this column to highlight to-go options, with fervent, if not entirely festive, hopes that restaurant dining will recover in the year(s) to come.

The same ground rules continue to apply: We are attempting to stick to locally owned or at least locally operated establishments, within a reasonable radius of our home base so food arrives with sufficient residual warmth. We pay for our meals up front. We don't take requests for reviews.

WHAT WE GOT: Shrimp Chimichurri ($18)

At Cannibal and Craft, a new two-level River Market branch of a Fayetteville club, the downstairs is fairly sedate, with wood paneling and a gigantic bar; upstairs, where we have not yet ventured, is a tiki bar of apparently impressive dimensions. Perhaps, needless to say, the emphasis in both areas isn't so much the food as the cocktail program, but there is a menu with a baker's half-dozen dishes, ranging from roasted red pepper hummus and steak frites to a $40 charcuterie plate with wild game sausage, artisan meats and cheeses, dried fruit and assorted flatbreads.

We opted for something in the middle. We might have been a little disappointed to open our black-foam clamshell container to discover there were only six medium-size shrimp ranged along a strip of aluminum foil, but the dish met, and maybe exceeded, our high taste expectations. They were well coated in the tangy, fairly vivid South American sauce, with a pickled onion and baby spinach salad on the side, well complemented and enlivened by a basil chianti vinaigrette, plus half an orange. The flavor was no less engaging as the shrimp cooled, which didn't take long. The orange made for a nice dessert.

HOW IT WENT: We made several attempts to call in our order and couldn't get anybody to answer the phone, so we trundled down to the River Market and placed our order at the massive downstairs bar. It took about 10 minutes for our order to come out of the kitchen,

HOW IT'S GOING: The downstairs area certainly wasn't busy on a weeknight, but it wasn't empty — there were a couple of other customers, sufficiently distant, at the bar. We saw a few folks traveling up and down the stairs to and from the upstairs bar, but we weren't able to gauge how busy it might have been up there. 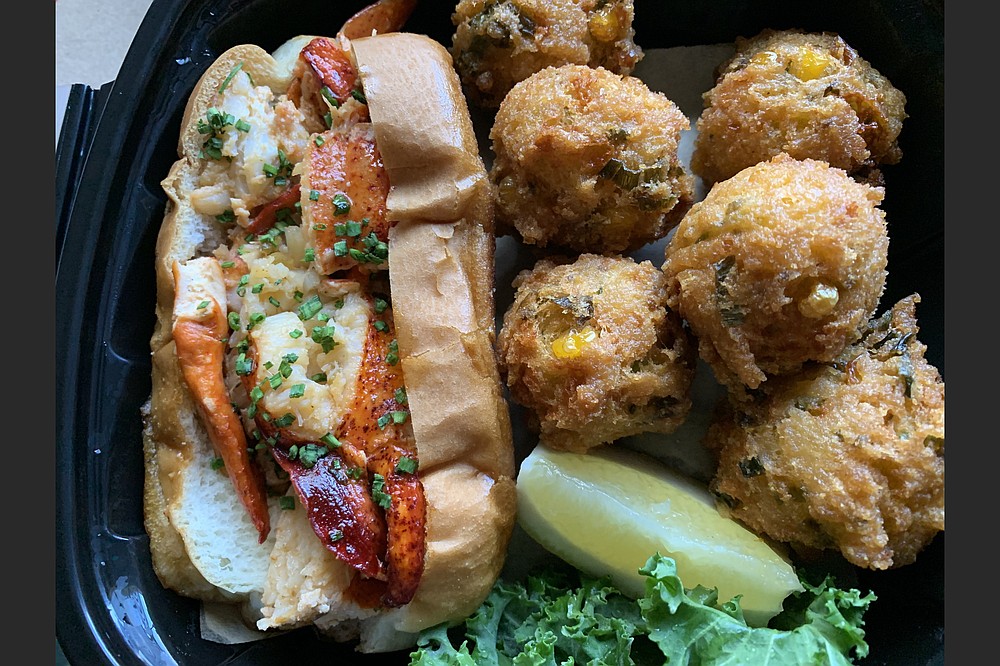 There was plenty of lobster in the Warm Buttered Lobster Roll from The Oyster Bar, and we got six hush puppies on the side. (Arkansas Democrat-Gazette/Eric E. Harrison)

WHAT WE GOT: Warm Buttered Lobster Roll ($26) with side hush puppies

The new ownership of The Oyster Bar reopened it following a complete reconstruction; it's considerably more upscale and consequently considerably more expensive than it used to be. One of the upsides of upscaling, however, has been that you do, on the whole, get better quality for your money; the lobster roll we picked for lunch is a good example.

There was a lot more lobster in the warm buttered roll than first appeared, and the combination of good flavor and good mouth feel went a long way to assuaging our anxiety over the lunchtime cost. Also making us feel more like, or at least closer to, that we'd gotten our money's worth: the sandwich comes with choice of one of nearly a dozen side items; we chose the hush puppies, six of them, crisp-fried and containing corn kernels and some slightly lively peppers within the cornmeal.

HOW IT WENT: We are now pretty certain that the online menu is current and matches the one in the restaurant, so next time we'll be able to place our order by phone, but this time we decided to skip on down there and order in person. It took a few minutes for us to place our order — there isn't anybody whose specific job it is to take walk-in to-go orders and the entire staff was madly trying to cope with a large dine-in lunch rush — and about 12 minutes after that for it to come out of the kitchen.

HOW IT'S GOING: We mentioned that the place was very busy in the heart of the lunch hour. There was one other to-go order pending when we arrived. 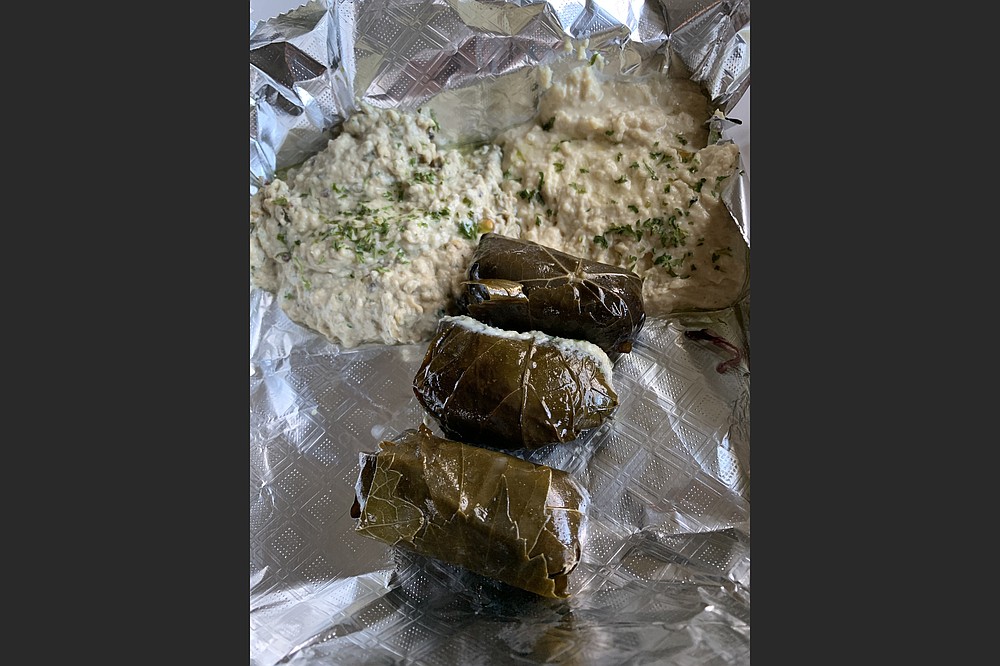 We got baba ghanoush (clockwise from top left), hummus, dolmas in our Appetizer Trio from Istanbul Mediterranean Restaurant in the the Pleasant Ridge Town Center on Cantrell Road in west Little Rock. (Arkansas Democrat-Gazette/Eric E. Harrison)

We chose three cold appetizers — dolmas, baba ghanoush and "plain" hummus, with ample fresh pita triangles for dipping — to create a lunch of decent size. We'd say we enjoyed all three equally, though, if we were, as many people are, concerned about their food "touching," we might have been a little upset at the slight baba ghanoush-hummus overlap. The baba ghanoush (eggplant whipped with yogurt, garlic and lemon juice) was pleasantly smoky and nicely chunky, while the hummus, a little chunkier than many we've tried, was smoother but had a nice kick to it. (A red pepper hummus is also an option.) The three dolmas (grape leaves stuffed with a mixture of rice, onions, herbs and Turkish spices "gently cooked with olive oil and lemon juice," according to the menu) were surprisingly filling and quite tasty.

HOW IT WENT: The dining room is open, and there are also a few tables out front on the shopping center sidewalk, so we boldly showed up to place and pay for our order there. We then retired to one of those outside tables to wait for our food, which, considering it didn't require any cooking, still took about eight minutes to come out of the kitchen.

HOW IT'S GOING: There were a handful of occupied indoor tables and one occupied outdoor table. There were no other to-go orders pending as we waited for ours. 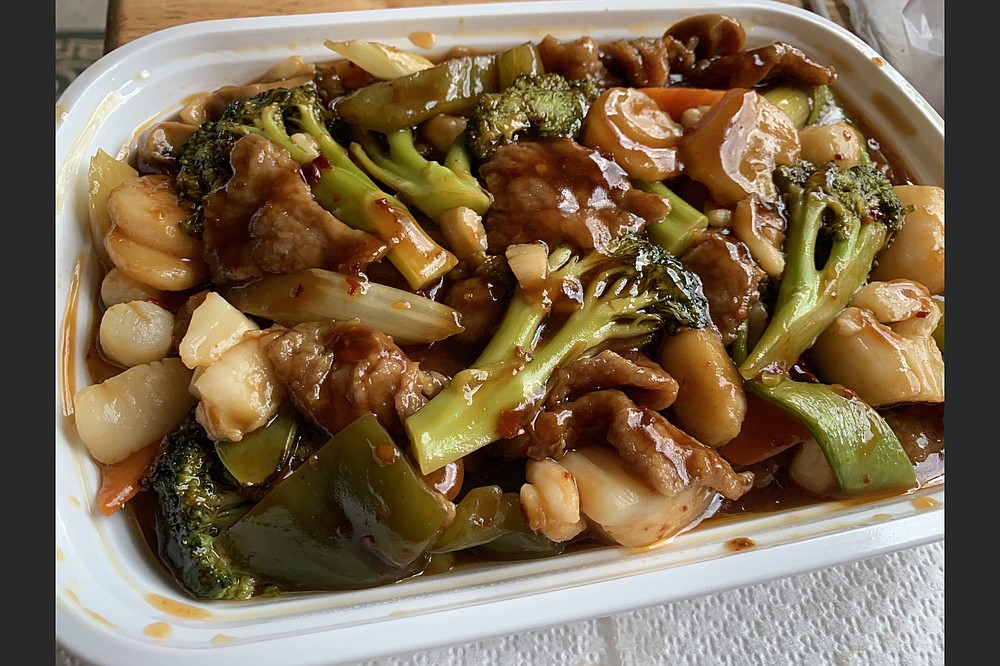 This is another in that category of quick-serve Chinese restaurants — think New Fun Ree, China Taste and Go-Go China, all of which we have covered in this column — that are primarily geared toward takeout even if you are eating on the premises. Great Wall, which occupies a storefront in a strip center on the northern "downhill" side of Park Hill just south of McCain Boulevard, has always had a couple of tables if you really insisted on eating there, but it has essentially been more of a grab-and-go operation, even more so during the pandemic.

Our beef and scallop dish was huge, nicely spicy and delicious, slices of sauteed beef (most of them fairly tender though a couple were chewy) with plentiful large and pearl-size scallops in a rich red-brown sauce with red pepper flakes, broccoli, green bell peppers, carrots, celery, pea pods, mushrooms and water chestnuts.

HOW IT WENT: We couldn't find an online menu, so we showed up in person. There's a stack of to-go menus out in front of the door so you can decide what to order before you enter; we had forgotten that the menu was almost, if not entirely, identical to that of New Fun Ree, or we'd have been able to order in advance. The restaurant has been turned into an anti-covid fortress, with Plexiglas sheets over the front counter and the few tables blocking customer access to more than the first couple of feet inside the front door. But the setup is flawed — to pay, the single front-of-house employee had to cross out of the counter-kitchen area to take our credit card, and to bring it and the check-to-sign back to us. To further reduce any risks, we were directed to return to our car and said employee delivered our order curbside.

HOW IT'S GOING: There were a couple of other people waiting in their cars for to-go orders alongside us late in the lunch period.