Move over, Elsie — Never mind the livestock, make yourself a hot tub out of a stock tank 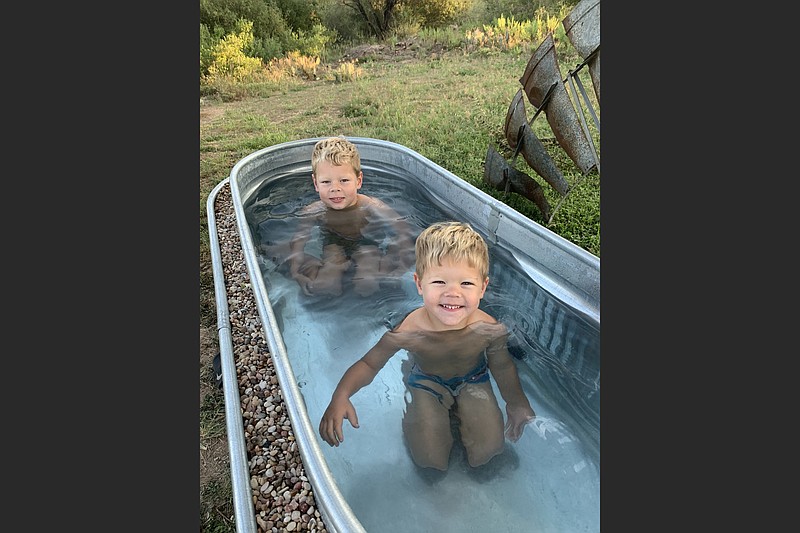 Sara Haddox's sons Caleb (back) and David (front) enjoying the hot trough for the first time. The family rents out their vacation home on airbnb.com. (Courtesy @houseonthellano/Sara Haddox)

If you happened to find yourself scouring the internet in search of an Intex inflatable pool last spring, only to come up empty-handed, you had company. According to Sabeena Hickman, president and chief executive of the Pool & Hot Tub Alliance, pool sales skyrocketed as Americans faced a quarantined season at home.

Based on permit numbers, 94,000 new in-ground residential pools will be built by the close of 2020, an increase of almost 21% from 2019. (The demand for hot tubs is more appreciable: Numbers are up 400% this year from last, according to Hickman, and hot tubs are largely backlogged six months.)

A dearth of conventional pools has brought a new type of soaking apparatus to the forefront, aided by social media: the stock tank pool. Crafted from a galvanized metal tank traditionally used as a water trough for farm animals, a stock tank pool can be assembled in a day with a few do-it-yourself items that can be found at most hardware stores. With cooler weather descending on us, and states headed toward probable lockdowns, some water lovers are opting for the next best thing: the make-your-own hot tub.

According to Ben Uyeda, designer and co-founder of HomeMade Modern, an online design source that publishes instructions for home furnishings and projects, the do-it-yourself hot tub moment has definitely arrived. Uyeda's videos detailing

how to make your own hot tub have

received millions of views. His first video featured a wood-burning heater, and his second, more user-friendly iteration included a heater made out of a propane tank.

"Every time we've done a hot-tub-related project like this — in a scrappy vein — the thumbnails for it have just generated massive amounts of clicks," he said.

The popularity of the hot tub videos reflects both the zeitgeist and this particular moment of the pandemic, Uyeda said. "You start with the essentials, and then you add things for efficiency." He said people are now more likely to take up do-it-yourself projects that are lifestyle upgrades, unlike early in the pandemic, when they sought remedies for immediate problems.

For Andrew Rowland, 30, and Caitlin Wallace-Rowland, 29, who live in New Orleans, the recent addition of a stock tank hot tub was a luxury that followed a long list of home renovations.

"We kind of renovated our entire front and back yards, and then we were sort of running out of activities," Wallace-Rowland said. After taking numerous weekend trips to the Mississippi coast so that their 2-year-old daughter, Laurel, could swim, they decided a pool was the next project to tackle.

In September, they fashioned what is now their hot tub out of a galvanized stock tank, with a heating apparatus configured from a propane tank. Wallace-Rowland, an artist and textile designer, planned where the pool would go and designed a landscaping scheme for it. Rowland, a director of system operations for a charter school, assumed the task of building the actual tub, which he described as "a very peaceful install." The result is a tub that suits their petite yard and allows for year-round enjoyment.

In September, Sara Haddox, 34, installed a stock tank hot tub at her Llano, Texas, home, which she largely rents out on Airbnb. 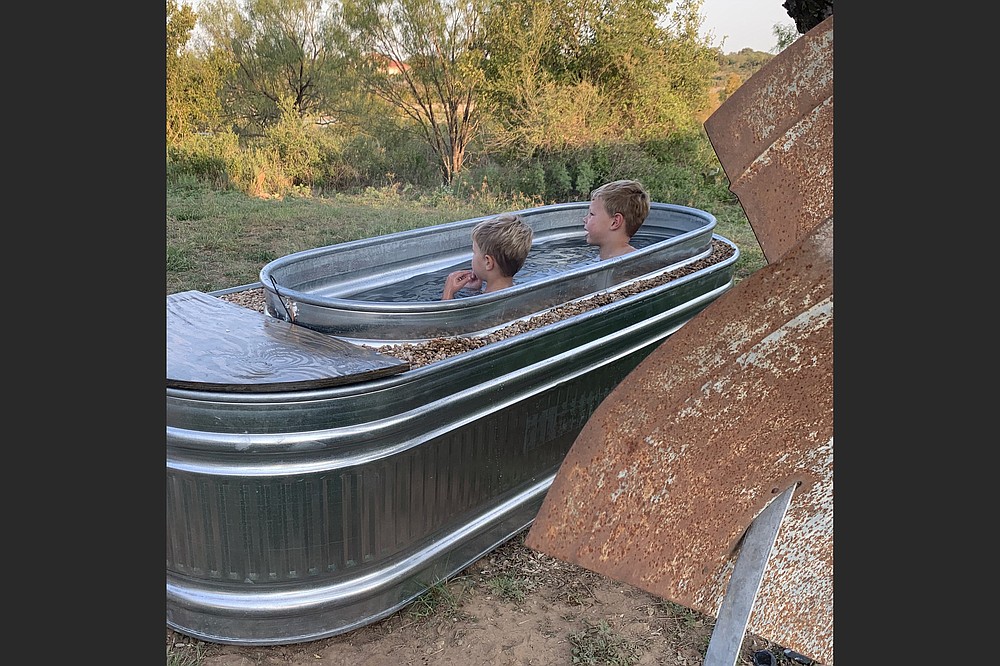 "My husband went on a big hunting trip, and while he was gone, I was bored, so I decided to go ahead and bring the hot tub idea to life," Haddox said.

Calling upon her degree in construction science, Haddox, who manages her family's rental property, created an insulated stock tank hot tub with an electric heater (rather than a propane one) so that it reaches a higher temperature and stays hotter for a longer time.

Her initial inspiration, she said, came from Pinterest and Instagram, where people had posted photos of stock tank tubs in stunning settings.

"I just loved these shots of these, like, isolated tubs, where you could just, you know, be in nature and just see forever and just enjoy being outside in a new way," she said. "Those pictures really sunk in." 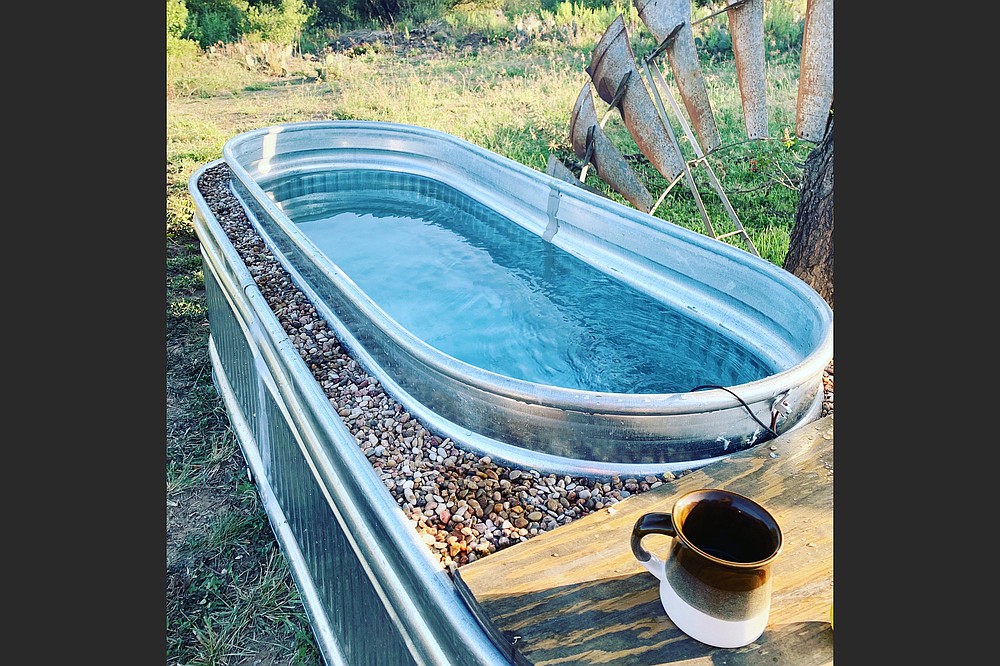 She had considered building a tub for years, she said, but the events of 2020 forced her hand. The result is a tub that has drawn attention to her family's Airbnb, which appears on Instagram as @houseonthellano. Although visitors may not be able to enjoy the nearby ice-cold Llano River in winter, or the city's restaurants and museums, they can enjoy the property's fire pit and, now, its winter-friendly hot tub.

"We needed to offer a more complete vacation package," Haddox said. Her homemade hot tub helped. She sells instructions based on the project on her blog.

A hot tub began as a hot weather pool project for E. Spencer Schubert. A sculptor in Kansas City, Mo., Schubert, 43, decided to add a stock tank pool to his property at the start of the pandemic to make up for his family's lost summer. He and his wife, Ryann, 42, rented an excavator and installed an 8-foot stock tank pool with surrounding decking. As for converting the pool into a hot tub, that was "just the next iteration," Schubert said.

The stock tank is now heated with a propane heater, and Schubert has converted the yard into a multiseason oasis, with a fire pit and "circus lights."

"During the reasonable temperature part of the year, the place of the house that we use the most is the backyard," he said. 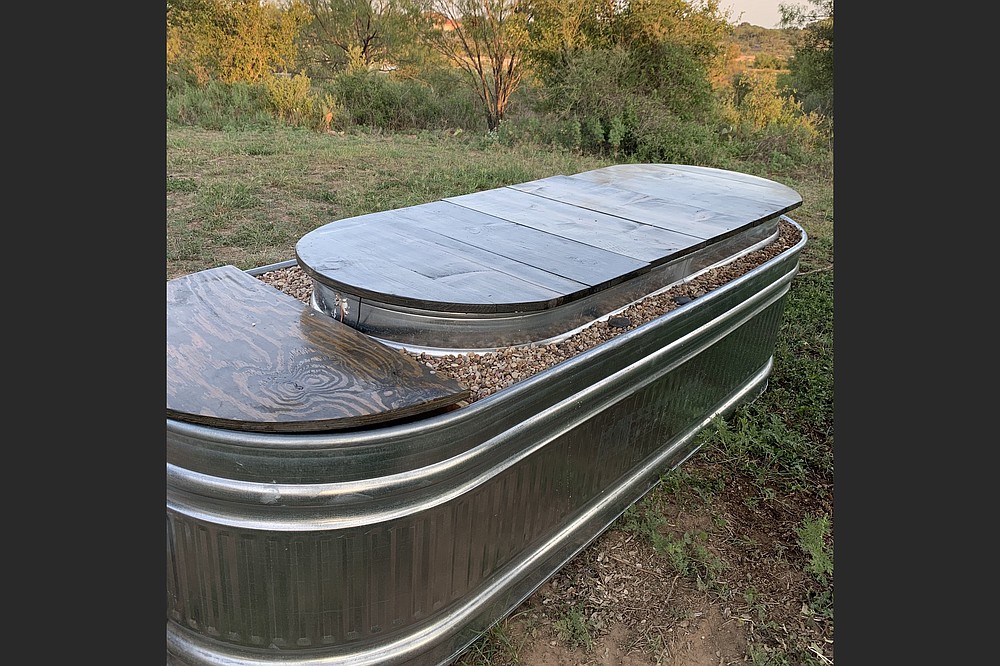 The hot trough has an insulted lid which helps it maintain its temperature 24 hours a day. (Courtesy @houseonthellano/Sara Haddox)

Although the temperature of the tub reaches about 90 degrees, Schubert said Missouri's cold winters will likely limit their use of it in February. Nonetheless, the do-it-yourself hot tub will lengthen the Schubert family's pool season.

The stock tank pool rose in popularity early in the pandemic, said Jovana Johnson and Janice Luna, the owners of H20 Tank Avenue in Santa Clarita, Calif., which delivers stock tanks to customers in that state, Arizona and Nevada. When they started their company in May, Johnson and Luna immediately sold the 27 tanks they had ordered.

"We said: 'OK, you know what? I think we're going to order another set of tanks, but this time we were going to go distributor status,'" Johnson said. She and Luna placed their second order, for 150 stock tanks, many of which sold on preorder via Instagram.

Now that the season has changed, they see potential in the market for tubs with heating options and have added a "tankuzzi" service to extend the stock pool season. They sell a tankless propane heater that increases the temperature of the water to 105 degrees.

"We're fortunate here in Southern California to have very mild winters," Luna said, which she said allows customers to use their pools and tubs all year long.

Johnson pointed out that a stock tank hot tub is flexible. ("If you decide to move, you can take it with you," she said.) A traditional hot tub can weigh more than a ton and often gets left behind in a move. The aesthetic of the stock tank hot tub has developed its own unique following, too. "It's just a chic look," Johnson said.

As for the rolling-up-the-shirt sleeves nature of the stock tank hot tub, Uyeda insists that building it yourself is part of the point. "It's a homemade-everything moment," he said.