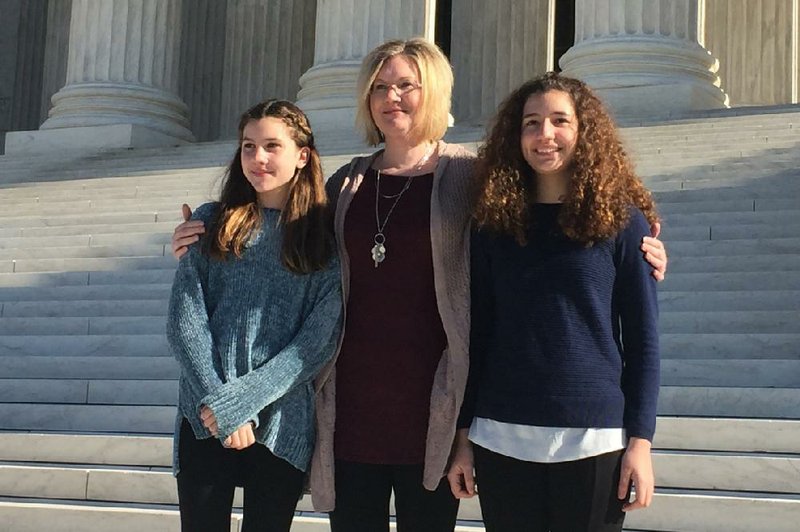 Kendra Espinoza of Kalispell, Mont., (center) stands with her daughters Naomi and Sarah outside the U.S. Supreme Court in Washington. Espinoza is the lead plaintiff in a case the court heard Jan. 22 that could make it easier to use public money to pay for religious schooling in many states.

KALISPELL, Mont. -- It is a blessed time at Stillwater Christian School, where Scripture adorns the gymnasium wall, enrollment is climbing and Head of School Jeremy Marsh awaits the four new classrooms that will be built in the spring.

It is a place that embraces the beliefs that sinners avoid eternal condemnation only through Jesus Christ, that a marriage consists of one man and one woman and that "human life is of inestimable worth in all its dimensions ... from conception through natural death."

"The religious instruction isn't just in little pockets of Bible class," Marsh said. "It really comes out as we are learning in all classes."

If a family craves Stillwater's academic rigor but not its evangelism, Marsh said he will gently advise that "this might not be the place for them."

Parents who believe religious schools such as Stillwater absolutely are the places for their children are at the center of what could be a landmark Supreme Court case testing the constitutionality of state laws that exclude religious organizations from government funding available to others. In this case, the concern rests on whether a scholarship fund supported by tax-deductible donations can help children attending the state's private schools, most of which are religious.

A decision in their favor would "remove a major barrier to educational opportunity for children nationwide," plaintiffs said in their brief to the Supreme Court. It is part of a movement by school choice advocates such as Education Secretary Betsy DeVos to allow government support of students seeking what she recently called "faith-based education."

Said Erica Smith, a lawyer representing the parents: "If we win this case, it will be the U.S. Supreme Court once again saying that school choice is fully constitutional and it's a good thing and it's something parents should have. And that will provide momentum to the entire country."

Randi Weingarten, president of the American Federation of Teachers, said such a ruling would be a "virtual earthquake," devastating to the way states fund public education.

And Montana told the court that, as in 37 other states, it is reasonable for its constitution to prohibit direct or indirect aid to religious organizations.

"The No-Aid Clause does not prohibit any religious practice," Montana said in its brief. "Nor does it authorize any discriminatory benefits program. It simply says that Montana will not financially aid religious schools."

But Montana is being called before a Supreme Court increasingly skeptical of such stark lines between church and state. A majority of justices in 2017 said Missouri could not ban a church school from requesting a grant from a state program that rehabilitated playgrounds. They have since been joined by Justice Brett Kavanaugh, who has signaled other such restrictions deserve the court's attention.

The Montana case is prompted by a 2015 decision by the state's legislature to create a tax-credit program for those who wanted to donate to a scholarship fund. The program allowed dollar-for-dollar tax credits to those who donated up to $150 to an organization that provides aid to parents who want to send their children to private school.

About 70% of qualifying private schools in Montana are affiliated with a religion, so that meant at least some of the money would go there.

And that conflicts with a section of the state constitution that prohibits public funds for "any sectarian purpose or to aid any church, school, academy, seminary, college, university, or other literary or scientific institution, controlled in whole or in part by any church, sect, or denomination."

Litigation followed, and the Montana Supreme Court ultimately struck down the program -- for religious and nonreligious private schools -- and said Montana's provision did not violate religious protections in the U.S. Constitution.

Kendra Espinoza was one of those who sued. Espinoza is a single mother with two daughters who said she found herself with tears in her eyes when she attended an informational meeting about Stillwater.

"The things I saw in the public school system -- I didn't like it," Espinoza said in December, in the town that bills itself the "Gateway to Glacier National Park."

Public schools are restricted to giving students only half the answer, according to Espinoza: "They are taught to behave and to be good. But why? Nothing comes from a values perspective, and I really wanted that faith-based curriculum."

Espinoza took on extra work. At one point she held a yard sale -- "I pretty much sold everything in my house that wasn't tied down," she said -- to raise money for tuition. Older daughter Naomi mowed lawns and younger sister Sarah joined them to clean offices to make extra money.

Full-price tuition at Stillwater this year ranges from nearly $6,900 for a kindergartner to nearly $8,700 for a high school student. But Marsh said about half of the families at the school qualify for financial aid.

The Montana scholarship aid would be in addition to that, and Espinoza said it would help with the annual meeting she has with her daughters when they discuss whether they will spend another year at Stillwater.

"I show them, 'This is what we take in, and this is what it costs,'" she said. "They know it means there are other things we will have to do without."

Espinoza was eager to sign on when Smith's organization, the libertarian Institute for Justice, came to Montana offering legal help. The organization has made school choice a priority and has been strategizing for years about getting the Supreme Court to take on state constitutional amendments forbidding public aid to religious schools.

They have waged war on the "Blaine Amendments" that swept through the country in the 1800s on a wave of anti-Catholicism. Montana's amendment was adopted in 1884 before the state was even admitted to the union.

But Montana rewrote its constitution in 1972. And Mae Nan Ellingson, who was the youngest member of that constitutional convention, said there was nothing anti-Catholic about retaining the bar on public aid to religious institutions.

The point of the convention was to "strengthen civil rights," she said. The clause was thoroughly debated, and its retention was endorsed by some religious leaders who did not want state involvement in religion.

In the end, said Ellingson and others who have filed a brief with the Supreme Court, the delegates and voters who approved the new constitution saw the prohibition as a way to make sure that public funds went to build a better public school system. She said they were careful to allow private schools to receive available federal funds.

They say federalism should allow states to make such decisions. Smith said that most of the states that have similar restrictions do not interpret them to bar any public support of private, religious education.

Still, the plaintiffs say that Montana's restrictions violate the U.S. Constitution and that the Montana Supreme Court's decision to the contrary should not stand.

The free-exercise clause of the First Amendment prohibits government from discriminating against religion, they say, including the parents who want to use the scholarship funds for schools that align with their faiths.

The Trump administration supports the plaintiffs, although it is limiting its arguments to the free-exercise clause.

But Montana, in its brief to the Supreme Court, said the state's high court took the only option that made sense of the state's constitution and its obligation not to single out the religious -- striking down the tax-credit program for religious and nonreligious private schools.

The plaintiffs "now contend that even that is unconstitutional," wrote Washington lawyer Adam Unikowsky, who is representing the Montana Department of Revenue. "It matters not, in Petitioners' view, that the government also does not aid similarly situated nonreligious schools. ... Petitioners claim that the Constitution prohibits the bare act of applying a state constitutional provision that keeps government out of the business of aiding religious schools."

But the fact that the Supreme Court decided to review a state program struck down by the state's highest court shows the interest that the concern holds for at least some of the justices.