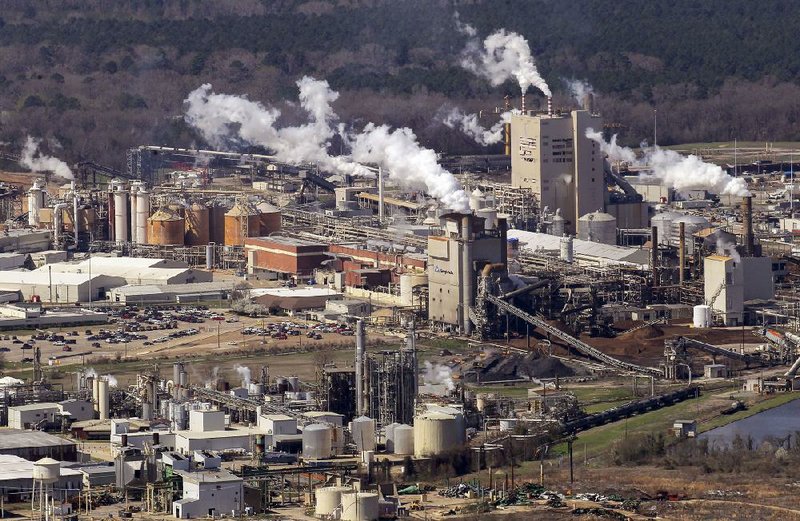 An aerial view shows the Georgia-Pacific paper mill in Crossett in 2018, the year the company entered a settlement with the U.S. Environmental Protection Agency, the U.S. Department of Justice and the Arkansas Division of Environmental Quality over hydrogen sulfide emissions at the plant. Under an amended settlement, Georgia-Pacific would alter the projects in order to reduce different emissions, but would still spend the same amount and pay the same fines. (Democrat-Gazette file photo)

A company long accused of polluting Crossett's air may abandon three environmental projects related to hydrogen sulfide emissions and instead pursue three others targeting different emissions, according to amendments to a proposed legal settlement.

The amended settlement would require Georgia-Pacific to pay the same fine and spend the same amount of money toward the three supplemental environmental projects.

Air monitoring tests near the Crossett paper mill showed hydrogen sulfide often was emitted at a level high enough to cause respiratory problems related to the smell. The "rotten egg" smelling chemical can cause eye, nose and throat irritation, headaches and breathing troubles, among other things. That's at levels as low as 0.5 parts of hydrogen sulfide per 1 billion parts of air.

The U.S. Environmental Protection Agency, the U.S. Department of Justice, the Arkansas Division of Environmental Quality and Georgia-Pacific entered into a settlement in late 2018 that required the company to pay a $600,000 fine and spend at least another $1.8 million to supplemental environmental projects designed to curb hydrogen sulfide emissions in Crossett. The fine would be split between the state and the EPA.

The amended settlement still will benefit Crossett residents, the EPA said in a news release.

The amended settlement follows the company's announcement last spring that it would shut down its pulping and bleaching operations at the paper and pulp plant, resulting in 555 layoffs. The operational change means the company has shut down the facility's "primary" source of hydrogen sulfide emissions, spokeswoman Jennifer King said.

Numeric estimates of the expected hydrogen sulfide emission reductions were unavailable Wednesday, so it's unclear how much of the substance may be eliminated from the air and how much would remain.

"GP is grateful to have this matter resolved and looks forward to being a competitive tissue production facility," King wrote in an email to the Arkansas Democrat-Gazette.

Many Crossett residents want hydrogen sulfide monitoring to continue, said Wilma Subra, a scientist hired by the Louisiana Environmental Action Network to study the air and water quality in Crossett, which is just upstream from the Ouachita River in Louisiana.

She said Wednesday that the air monitor that had been in place since 2014 was recently removed.

The three originally proposed projects are:

• Installing, for no less than $1 million, a 600,000-gallon tank to collect liquors, fiber and other material to better control the flow of some waste products into the system.

• A $500,000 project injecting more oxygen into the wastewater-treatment system, reducing hydrogen sulfide emissions and the smell.

• Spending at least $300,000, maintaining a public website that summarizes data from a community air monitoring station the company voluntarily installed in 2014. Georgia-Pacific must continue monitoring for at least three years after the website goes live.

The new projects are:

• Adding, for no less than $350,000, to the capacity of the epichlorohydrin storage tank to prevent releases of the substance.

• Replacing, for no less than $350,000, the current vacuum pump system with a new unit that's enclosed and designed to reduce "fugitive" emissions. The system is used to draw emissions out of kettles used to manufacture thermosetting resins. In other words, it's a potential source of "hazardous air pollutants" and "volatile organic compounds," as defined by the EPA.

• Buying, for no less than $1.1 million, a long-ladder firetruck for the Crossett Fire Department for emergency responses, "including those that may involve the release of hazardous substances."

The U.S. Centers for Disease Control and Prevention reports that epichlorohydrin is associated with nasal cancer in animals, and the EPA notes it's a "probable" human carcinogen.

To the EPA, "hazardous air pollutants" refers to 187 substances that are known to cause cancer or other serious health impacts. Hydrogen sulfide was once among those, but the EPA states that it was added inadvertently.

"Volatile organic compounds" are defined in the federal Clean Air Act as any compound of carbon, excluding a handful, "which participates in atmospheric photochemical reactions." They can cause health problems indoors and smog outdoors.

The law lists several dozens of compounds as examples.

The term also is used in the scientific community and may not explicitly refer to a carbon compound.

The consent decree stems from a 2015 agency inspection that found leaks and flaws in the company's management of hazardous air pollutants, such as formaldehyde.

The consent decree still orders several additional measures based on complaints from residents regarding excessive hydrogen sulfide in the air that often causes breathing troubles. Neither the decree nor the inspection state any specific findings or violations related to hydrogen sulfide.

The paper mill inspection in 2015 found dozens of violations, including leaks, monitoring failures and improper procedures. The EPA alleged that the company was in violation of the Clean Air Act and the Resource Conservation and Recovery Act.

The settlement is subject to a 30-day public comment period and final approval by U.S. District Judge Susan O. Hickey in the Western District of Arkansas. The comment period hasn't been scheduled.