Hopes fade for rapid rail line in Arkansas; costs too much, study concludes 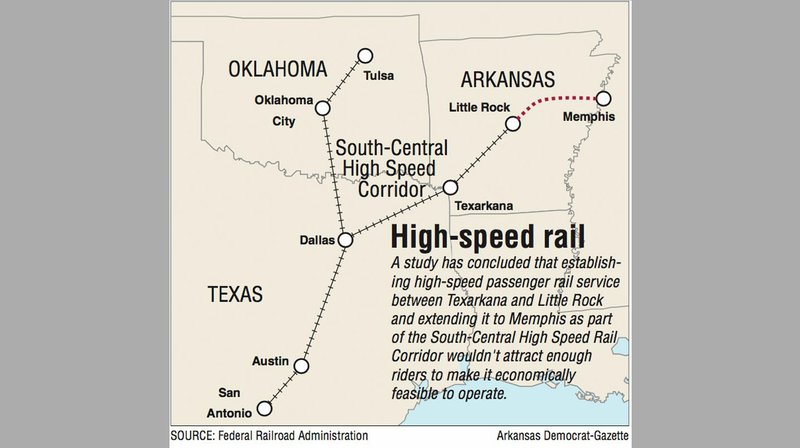 High-speed passenger rail service in Arkansas? Forget about it.

At least any time soon, according to a study that assessed whether a case could be made for it.

"The capital costs, ranging from $171 million to $402 million, far outweigh the benefits," a state-commissioned study by global infrastructure firm AECOM concluded. "Without a dedicated funding source, creating a high-speed passenger rail service from Texarkana through Little Rock to Memphis is cost prohibitive at this time."

The study found that even at a top speed of 110 mph, high-speed passenger rail along the route between Texarkana and Little Rock and a proposed extension to Memphis would attract no more than 130,000 passengers per year, or about 356 people per day, by 2040.

That is almost four times as many as ride on Amtrak's Texas Eagle now, but represents just 1% of traffic on Interstate 30 between Texarkana and Little Rock and Little Rock and Memphis. Estimated ticket revenue also would cover no more than 17% of the high-speed rail service operating costs, estimated to be as much as $37 million annually.

Even with higher speeds, the service would still be comparable to vehicle travel, according to the study.

The higher-speed alternative -- 110 mph -- would allow a journey between Little Rock and Texarkana to take 2.2 hours versus the 2.9 hours it takes the Texas Eagle now. Travel time between the same two points takes about two hours by vehicle during off-peak travel times.

"There's not enough benefit both from a time-saving standpoint for people who would use passenger rail or from a reduction in traffic on existing highways to outweigh the cost of implementing, which just means it's not cost effective," said Scott Bennett, the director of the Arkansas Department of Transportation, which commissioned the study.

The study cost almost $900,000, with $100,000 coming from the state Legislature and the remainder split between the Arkansas Department of Transportation and the Federal Railroad Administration.

The segments at which the study looked at are part of the South-Central High Speed Rail Corridor, one of 10 high-speed rail corridors established by the U.S. Department of Transportation.

There is no passenger rail service between Little Rock and Memphis.

Bill Pollard, a dentist from Conway who is a member of the Texas Eagle Marketing and Performance Organization, which is a grassroots organization dedicated to promoting ridership on the Texas Eagle, expressed disappointment with the study.

Pollard, who only read a copy of the executive summary, said it appeared the study looked only at ridership within the state when the segments would connect Dallas to Little Rock and Memphis during a time the study said vehicle traffic on those routes continues to grow.

"I fear that the ridership projections are largely intrastate ridership, which is the smallest component," Pollard said.

"That is a flaw in the study."

He also faulted the study for limiting trips to twice a day when it would be more attractive to operate at least three trips a day.

"On a very short corridor you would need a minimum of three trips a day," he said. "The frequency as well as the speed determines ridership."

Pollard said using ridership on the Texas Eagle was unfair.

"The ridership in Arkansas is paltry at best" because of its location and timing the trains to hit large population centers at convenient times," he said. "You have to hit Chicago, St. Louis and Dallas.

"I don't think the Texas Eagle ridership has any bearing. It's like looking at apples and oranges."

Efforts to undertake the study began 10 years ago.

"It's unfortunate it has taken this long," Pollard said. "A lot has changed."