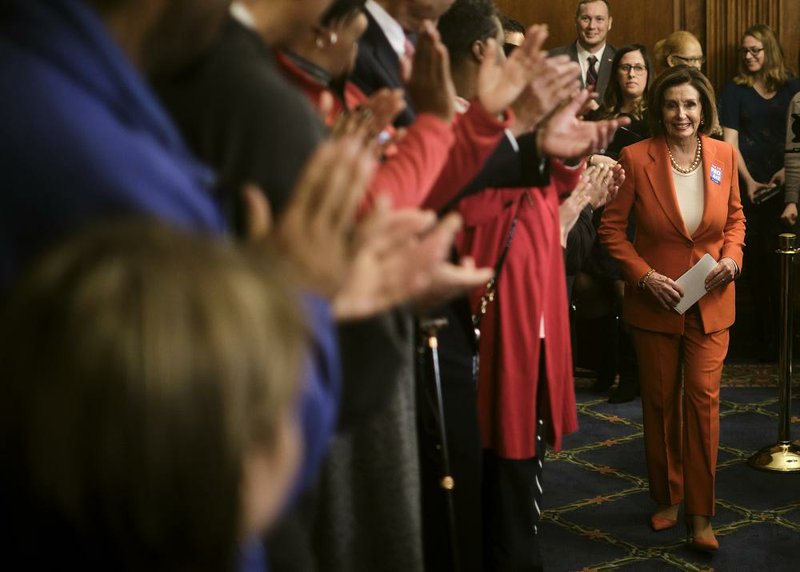 House Speaker Nancy Pelosi arrives to applause Wednesday on Capitol Hill to speak at an event pushing the Right to Organize Act. “Of course, I tried to be courteous and appropriate and all that,” she told colleagues about her actions at the State of the Union address. “But the fact is, there is too much at risk, too much at stake — and everything that America is: our Constitution, our rights, freedom of the press, the guardians of our democracy.” (The New York Times/T.J. Kirkpatrick)

WASHINGTON -- Speaker Nancy Pelosi's parting shot after President Donald Trump's State of the Union address Tuesday night -- as she ripped up the speech he had just delivered -- turned overnight into yet another Washington Rorschach test, in which Republicans and Democrats look at the same image and walk away with the opposite conclusions.

The president spent his morning circulating anti-Pelosi messages on Twitter, some carrying the hashtag #PelosiTantrum. At the White House, his counselor Kellyanne Conway said the speaker deserved to be censured. The White House Twitter account said her action would tarnish her legacy.

But at the Capitol on Wednesday morning, Pelosi was unapologetic. She told a closed-door meeting of her rank and file that she felt "very liberated" by her act, which was spontaneous, according to a Democratic aide in the room.

She said it grew out of her frustration with the way Trump had mischaracterized his policies on health care and other matters. And, she said, he "disrespected the chamber he was in" by using it as "a backdrop for a reality show" -- including having his wife, Melania Trump, drape a Presidential Medal of Freedom around the neck of Rush Limbaugh, the conservative talk show host -- to "give a speech that had no connection with reality."

[Video not showing up above? Click here to watch » https://www.youtube.com/watch?v=_IZOPkI0avw]

Democrats responded by giving her a standing ovation in the private session.

"As far as I'm concerned, a shredder wasn't available, and so she did what she needed to do," Rep. Hakeem Jeffries of New York, chairman of the House Democratic caucus, said afterward.

The speaker knew going into it that Tuesday night would be tense, and she had said she would treat the president with respect.

"Of course, I tried to be courteous and appropriate and all that," she told her members Wednesday morning, according to the Democratic aide, who spoke on condition of anonymity to describe her private remarks. "But the fact is, there is too much at risk, too much at stake -- and everything that America is: our Constitution, our rights, freedom of the press, the guardians of our democracy."

The night began with Trump not taking Pelosi's offer of a handshake after he presented her a copy of his remarks. She told her fellow Democrats she "didn't care" about the handshake, said Rep. Lois Frankel, D-Fla.

Democrats emerging from the session said they found it difficult to sit still and treat the president with respect, as the speaker had urged them to do, given policy pronouncements that seemed to have only a passing relationship with the truth.

"We're a captive audience," Frankel said. "We are told to be very respectful, and it's very difficult when the man is lying, lying, lying, and we have to sit there and just be quiet. So I think she did the only thing she could do within the realm of respectability. She basically said she had had it."

But Conway called Pelosi's actions a "temper tantrum" and said it was not the first time she had seen the speaker have one.

"America saw an incorrigible child ripping up the State of the Union," Conway told reporters Wednesday. "I think it shows you how petty and peevish and partisan the Democratic Party has become."

While the president did not criticize Pelosi in his own words Wednesday, he amplified the criticisms of others, including Chris Loesch, whose wife, Dana, is a former spokeswoman for the National Rifle Association. Chris Loesch called the speaker "uncouth" and also demanded her censure.

Trump also retweeted a message from the official White House account posted late Tuesday, suggesting that Pelosi's act had disrespected not only the president but the people he had honored in his speech.

"Speaker Pelosi just ripped up: One of our last surviving Tuskegee Airmen. The survival of a child born at 21 weeks. The mourning families of Rocky Jones and Kayla Mueller. A service member's reunion with his family. That's her legacy," the message read.

Vice President Mike Pence said Pelosi had "tried to make it about her."

During last year's address, a brief clip of the speaker extending her arms and clapping for Trump, as he turned to look at her, went viral. A month earlier, Pelosi called Trump "petulant" after he stormed out of a White House meeting about the government shutdown.

Trump has given Pelosi derisive nicknames that portray her as anxious and unhinged, such as "Crazy Nancy" and "Nervous Nancy." In January, he predicted on Twitter that she would be remembered as the "absolute worst Speaker of the House in U.S. history!"

Pelosi has said Trump does not know right from wrong, and during his impeachment trial, she adopted the argument that despite his likely acquittal, he would be "impeached forever."