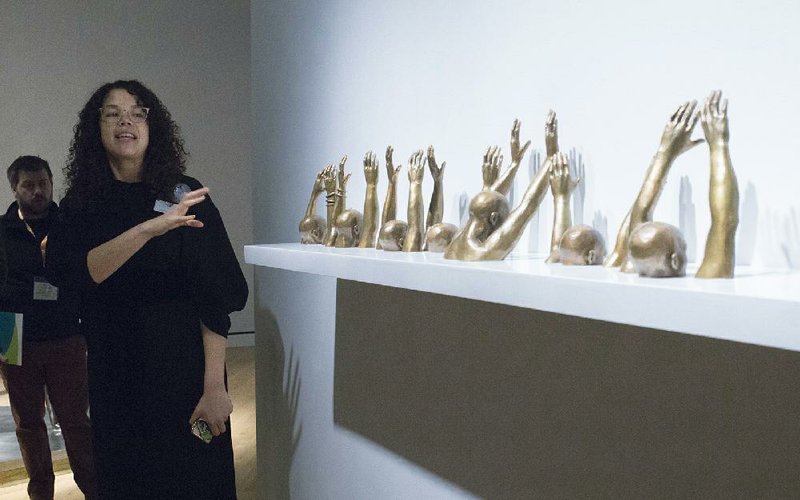 BENTONVILLE -- A new exhibition at Crystal Bridges Museum of American Art features an artist whose work examines popular culture and art's role in raising awareness of the struggle for social justice and civil rights.

"Hank Willis Thomas: All Things Being Equal..." opens Saturday at Crystal Bridges Museum of American Art, where it will be on view through April 20. The exhibition comprises 91 of Thomas' works, including photography, sculpture, textiles, video, mixed media and collaborations with other artists.

The first comprehensive survey of the 43-year-old artist's career to date, the exhibition was organized at the Portland Art Museum in Oregon by Julie Dolan, curator of photography, and Sara Krajewski, curator of modern and contemporary art. After its run at Crystal Bridges, the exhibition will travel to the Cincinnati Art Museum.

On a preview tour at Crystal Bridges on Thursday, Allison Glenn, the museum's associate curator of contemporary art, led visitors through the gallery where Thomas' work is displayed in themed sections. The exhibition begins just outside the gallery entrance with a piece commissioned by the Portland Art Museum specifically for this project. Titled 14,719, it consists of 16 blue banners, each 28 feet long and embroidered with white stars, hanging from the ceiling. The title refers to the number of stars, each of which represents a person shot and killed by someone else in the United States in 2018.

Inside the gallery, gun violence is again referenced in the section "Remember Me," a grouping of works commemorating Thomas' cousin who was robbed at gunpoint and murdered in 2000. One of these pieces, a collage of portraits on vinyl sheets covering two walls titled Bearing Witness: Murder's Wake, is accompanied by Thomas' notes explaining the images are of his cousin's family members and friends "who bear witness to his being as well as to his absence."

Thomas began his career as a photographer, and much of his work draws in some way on that background. One section, called "Punctum," contains sculptures he created as three-dimensional representations of archival photographs from places such as Soweto, South Africa, during apartheid; Nazi concentration camps; and America during the civil-rights struggles of the early 1960s.

One piece from this grouping, titled Looking for America, is a life-size bronze and steel sculpture of a body being pulled in multiple directions. It is based on a 1964 photograph by Danny Lyons of a civil-rights activist being grabbed by National Guardsmen while demonstrators try to pull him back. The photo that inspired the sculpture is posted nearby.

Thomas' photographic work is also used inventively in an interactive "Trouble the Waters" section of "Retroreflectives." While flash photography is generally not allowed in Crystal Bridges' galleries, here visitors are encouraged to use their camera flash or cellphone flashlight to examine the photos displayed. The artist used a technique in which, under normal gallery lighting, only a small part of the full photograph is visible. Under the enhanced lighting, though, the full image appears.

Near the gallery's exit, visitors are invited to take part in a project inspired by Thomas' collaboration with artist Eric Gottesman called For Freedoms. According to a news release, the artist-led organization focuses on making space for art and civic engagement through exhibitions and community conversations.

In this section, visitors can fill out "Freedom Cards" bearing the prompts "Freedom From," "Freedom For," "Freedom To" and "Freedom Of." These can be added to a display attached to a wall by the exit, allowing visitors to add their voices to the project. In addition, Crystal Bridges will host four community conversations, each focusing on one of Franklin D. Roosevelt's Four Freedoms -- freedom from want and fear, and freedom of speech and worship -- in Fayetteville, Rogers, Springdale and Bentonville in coming weeks. More information can be found on the museum's website.

General admission to the exhibition is $5 plus tax. Admission is free for museum members, veterans and visitors 18 and younger.

A host of lectures, film screenings, concerts and other events is slated in conjunction with the exhibition. The full calendar of programs is posted on at www.crystalbridges.org.