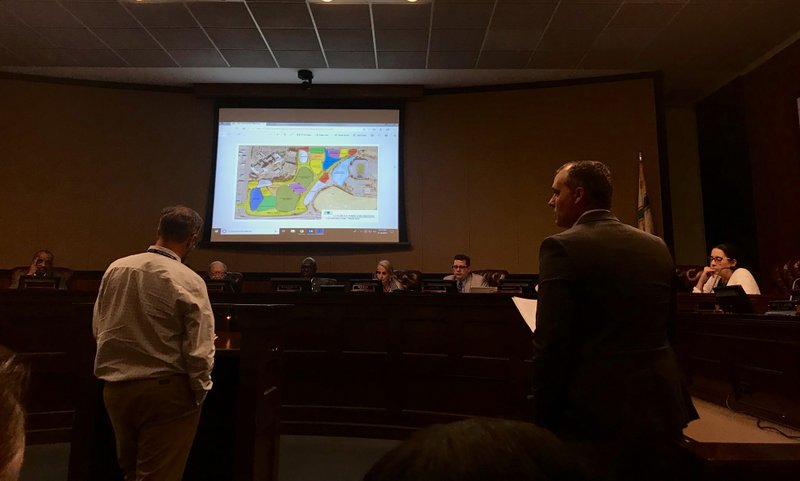 The Little Rock Board of Directors is shown in this file photo.

Four of the 10 seats on the Little Rock Board of Directors are up for election in November, and residents have begun announcing exploratory committees or plans to run for the three at-large positions.

Little Rock voters will choose the Ward 4 director as well as three at-large directors. The remaining six ward seats on the board, as well as the mayor's position, will be up for election in 2022. Ward 4 covers an area mainly west of Mississippi Street, north of Markham Street, east of Hinson Road, and south of the Little Maumelle River.

When candidates for Little Rock office are allowed to begin fundraising has been the topic of debate in recent elections. A city ordinance prohibits collecting money until June, but in 2018 mayoral candidates began raising funds through exploratory committees because the ordinance specifies "candidates."

At least two people are planning to run for Position 9, which has been held by At-large City Director Gene Fortson for nearly 14 years. Fortson said Friday that he does not plan to run for reelection.

"It's been a long time. I've enjoyed every bit of it," he said. "It's probably time for some younger people."

Educator Leron McAdoo said in December in a Facebook post that he was running for the position, and attorney Antwan Phillips announced that he had formed an exploratory committee for the seat in a news release Thursday.

In a statement Thursday, Phillips said the city is ready for better neighborhoods, economic opportunities and recreational options.

The at-large Position 10 has been held by City Director Joan Adcock since 1993. Adcock told the Arkansas Democrat-Gazette in January that she planned to run for reelection but would not campaign until June.

At least two possible challengers have shared on social media that they plan to run for the seat: Greg Henderson, who runs the local food blog Rock City Eats, and Russ Racop, who operates several blogs critical of Arkansas governments and agencies.

In a Facebook post, Henderson said he thinks "a fresh perspective and a willingness to move the city forward" are needed.

The lead image on Racop's campaign page on Facebook includes the anti-corruption hashtags #TimeForChange and #CleanOutCityHall.

The at-large Position 8 has been held by City Director Dean Kumpuris since 1995. Kumpuris did not return voicemails asking whether he intended to run again by Friday evening.

Ward 4 City Director Capi Peck said Friday that she plans to seek a second term, with a formal announcement in March and no fundraising until June. She said she was not yet aware of any opponents in the race, but heard there might be soon. Peck was first elected to the city board in 2016.

"I got a lot of good feedback," she said Friday of her first term.

City directors are paid $18,000 a year. Each position has a four-year term. The mayor serves as an 11th member of the city board with veto power, but can vote only in the event of a tie.