$1.8B Chinese paper project in Clark County now on hold 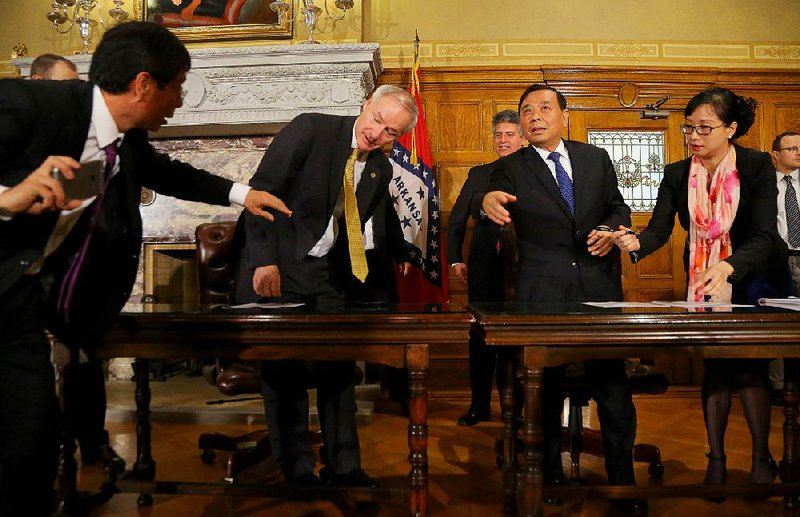 FILE — Aides get Gov. Asa Hutchinson and Sun Paper executive Hongxin Li to their places on April 26, 2016, at the state Capitol in preparation for a signing ceremony for Sun Paper’s pulp mill in Clark County. ( Arkansas Democrat-Gazette / Stephen B. Thornton)

Clark County economic development officials are taking steps to market the property they once had hoped would be the site of a $1.8 billion paper mill employing 350 people, a situation they said the company blamed on the simmering trade war between the United States and China.

Announced with great fanfare nearly four years ago, the project by Shandong Sun Paper Industry would have provided 1,000 additional jobs in the logging industry and 2,000 to construct the mill.

The U.S.-China trade war has cost the state more than 1,200 jobs that have been announced in recent years. They include a garment manufacturer in Forrest City that was supposed to employ 800 workers and pet treat production facility in Danville that was said to potentially employ 75 workers.

Both projects were announced in 2017, but no appreciable progress has been made on either project since the two-year-old trade war began when the United States and China imposed hundreds of billions of dollars on each other's goods, driven by President Donald Trump's accusations that China engaged in unfair trading practices and intellectual property theft.

Arkadelphia economic officials said their decision came after a visit to China in October when Sun Paper officials told them they wanted a "pause" in the project until January, assuming a trade deal was reached.

A "phase one" trade agreement was signed last month in which China pledged to boost U.S. imports by $200 billion above 2017 levels and strengthen intellectual property rules. The U.S., in turn, delayed some tariffs on Chinese imports and agreed to halve some of the new tariffs it had imposed on China.

But it wasn't enough to move the project forward, said Stephen Bell, president and chief executive officer of the Arkadelphia Alliance and Area Chamber of Commerce.

"We're not ruling out the Sun Paper project, but clearly there's not going to be anything happening this year and probably not anytime soon into 2021 because they would have to have a trade agreement," Bell said. "Rather than just sitting around waiting, we're going to pursue other industrial prospects and see what we get."

The alliance and chamber posted on its Facebook page Monday morning an announcement that the Arkadelphia Regional Economic Development Alliance is working with Entergy to have the former Sun Bio site certified in order to market the 1,000-acre property to a potential industry. The announcement was first reported by Arkansas Business.

"So when we were [in China] we told them we would have to start marketing the site, and they asked us to wait until January," which Clark County officials agreed to, Bell said. But only until January.

"Our organization exists to recruit industry to Clark County and we have to answer to the residents of Clark County and we thought it was prudent to market the site rather than simply waiting to hope that the trade dispute gets resolved in the near future," he said.

Members of Entergy's business and economic team toured the site last month to see what it steps Clark County officials would need to take in order to get it certified as a shovel-ready site, a process that Bell said could take three or four months.

Gov. Asa Hutchinson announced the project in April 2017 at the state Capitol. On hand was Hongxin Li, chairman and founder of Sun Paper, along with other executives with Sun Paper, as well as state and local dignitaries. The governor didn't immediately comment on the Monday's development.

Mike Preston, the state commerce secretary, said he expects the project to be completed.

"Arkansas Economic Development Commission and the State of Arkansas remain committed to the Sun Bio project in Arkadelphia, as does the company," the statement said. "While there have been delays due to multiple factors in China, we anticipate them moving forward with the project. The community has been supportive and patient and understandably wants to be prepared for other opportunities."

Bell said the company wanted to move forward with the project, too.

"Sun Paper did get their air permit from the Arkansas Department of Environmental Quality so they were honestly ready to start the project this year had it not been for the events on an international level," he said.

Sun initially expected to build a bio-products mill -- to produce rayon from dissolved pulp -- but switched plans to the production of unbleached linerboard used in shipping boxes, high in demand because of online sales and overnight shipping.

The mill site was to be at Arkansas 26 and U.S. 67 near the Gum Springs community, south of Arkadelphia.

State and local incentives were part of the deal to land the paper mill.

State incentives to Sun Bio include a cash rebate equal to 5% of new payroll for 10 years; sales tax refunds on building materials, machinery and equipment; a $12.5 million grant for site preparation and equipment; up to $3 million for workforce training; and a $50 million collateralized loan provided through multiple state sources.

An incentives package from Clark County and Arkadelphia includes $10 million to help offset infrastructure costs, drawn from the county's 0.5% sales tax that has been collected for nine years for economic development.

Another incentive provides about $92 million in the form of a 65% county property-tax discount over 20 years.