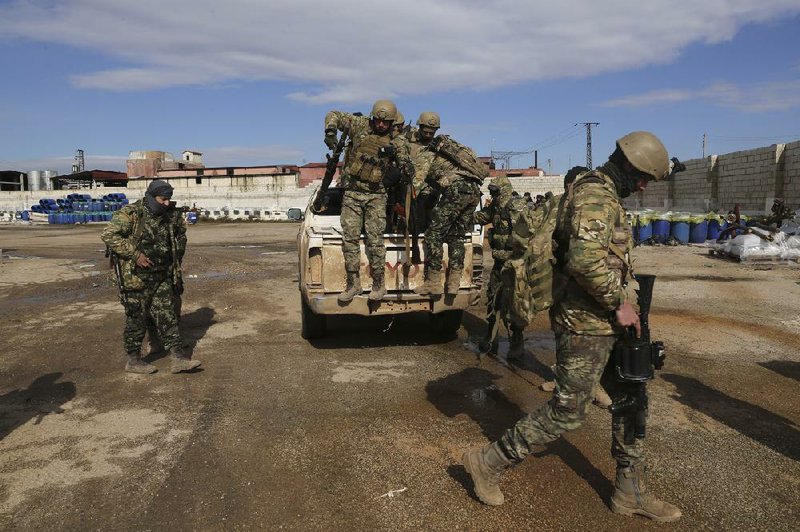 The exchange of fire was a marked escalation a week after a similarly deadly clash between the two sides. It came as a Russian delegation held a second round of talks in the Turkish capital of Ankara to discuss the fighting in Idlib province, which has uprooted more than a half-million people in the past two months.

No statement was issued at the end of the talks.

The fighting led to the collapse of a fragile cease-fire brokered by Turkey and Russia in 2018. Turkey supports the Syrian rebels, while Russia heavily backs the Syrian government's campaign to retake the area, which is the last rebel stronghold in Syria.

[Video not showing up above? Click here to watch » https://www.youtube.com/watch?v=y8HUQm2w5Co]

"This could well prove to be the largest number of people displaced in a single period since the Syrian crisis began almost nine years ago," Swanson added, reiterating the call for an immediate truce.

The U.N. "remains deeply alarmed about the safety and protection of over 3 million civilians in Idlib and surrounding areas, over half of whom are internally displaced, as reports of airstrikes and shellings continue in Syria," U.N. deputy spokesman Farhan Haq said in New York.

At least 49 civilians were killed between Feb. 1 and Wednesday, with at least 186 civilians killed in January, he said.

Most of the displaced are living in open-air shelters and temporary homes in rain, snow and freezing temperatures near the Turkish border. Half are believed to be children.

The fighting has led Turkey to send hundreds of military vehicles and troops into Idlib province in the past week, bringing both countries' forces into direct confrontation, a rarity in the Syrian conflict.

Eight Turkish military and civilian personnel and 13 Syrian soldiers were killed in a clash in the province last week. Turkey has warned Syria to retreat to cease-fire lines that were agreed in 2018.

The Turkish Defense Ministry said its five troops that were killed and those who were wounded were reinforcements that had been sent to Idlib.

"Our fire support vehicles immediately fired on the targets with intensity and the necessary response was given," the ministry said. The statement did not say where the attack took place but news reports said it was at Taftanaz, where Turkish troops were believed to have been trying to set up a base.

A later statement said the retaliation was in line with Turkey's rules of engagement and its right to self-defense.

The Syrian Observatory for Human Rights, an opposition monitoring group, gave a higher casualty toll, reporting six Turkish soldiers were killed and seven were wounded in the Syrian shelling at the Taftanaz air base. It added that four Syrian rebels were killed in the shelling.

The Russian team returned to Ankara on Monday from a visit to Jordan and held talks with Ibrahim Kalin, a top aide to President Recep Tayyip Erdogan.

During the meeting, Kalin "emphasized the need for the attacks against Turkish soldiers and the observation to be stopped," according to a statement from his office, carried by state-run Anadolu Agency.

Syria's military has vowed to continue its campaign.

Information for this article was contributed by Sarah El Deeb and Edith M. Lederer of The Associated Press.