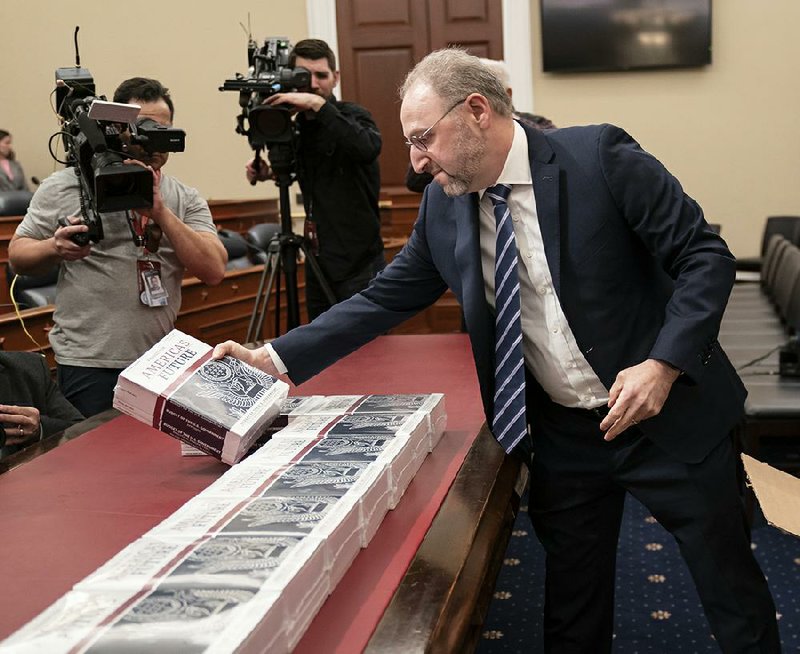 WASHINGTON -- Saying he had "no choice" but to boost spending for the military and national defense, President Donald Trump on Monday unveiled a $4.8 trillion election-year budget plan.

"We're taking good care of our military," Trump said at the White House, speaking to the nation's governors. "We're increasing spending on our nuclear program because we have no choice -- because of what China is doing, what Russia is doing in particular. And so we have a very big number in for that.

"Now, at the same time, Russia and China both want to negotiate with us to stop this craziness of spending billions and billions of dollars on nuclear weapons," he added. "But the only way, until we have that agreement -- the only thing I can do is create, by far, the strongest nuclear force anywhere in the world, which, as you know, over the last three years, we very much upgraded our nuclear."

"We call them super-fast, where they're four, five, six and even seven times faster than an ordinary missile," Trump said Monday. "We need that because again, Russia has some; I won't tell you how they got it. They got it, supposedly, from plans from the Obama administration when we weren't doing it. And that's too bad. That's not good. But that's how it happened."

The budget also proposes a 3% pay raise for members of the military.

[Video not showing up above? Click here to watch » https://www.youtube.com/watch?v=dhvNCw7nBxo]

The president vowed Monday that cuts in Medicare and Social Security were off the table.

Trump also said his administration was not decreasing Medicaid, but his budget's proposed cuts to Medicaid and subsidies for health insurance policies under the Patient Protection and Affordable Care Act total almost $1 trillion over 10 years, according to calculations by the liberal-leaning Center on Budget and Policy Priorities.

Trump's budget also proposes $465 billion in savings from Medicare over the next decade through medical-liability changes and modifying payments to hospitals for uncompensated care. That prompted criticism from Democrats.

House Speaker Nancy Pelosi, D-Calif., accused Trump of "a complete reversal of the promises he made in the [2016] campaign and a contradiction of the statements he made at the State of the Union."

The proposal also includes cuts to food stamps, farm subsidies and affordable housing efforts. Trump said some of those cuts would be achieved in part by rooting out "waste and fraud -- tremendous waste and tremendous fraud."

The budget "sets the course for a future of continued American dominance and prosperity," Trump said in a message accompanying the document.

The budget is widely considered to have no chance of passing Congress in its current form.

Rep. Richard Neal, D-Mass., the House Ways and Means Committee chairman, said that when he saw the budget, "I felt an immense sense of relief -- relief that there is absolutely no chance of his ruthless cuts to critical programs ever becoming law."

Trump's GOP allies were restrained in their comments. Senate Budget Committee Chairman Mike Enzi, R-Wyo., called it "just a list of suggestions, as the power of the purse rests with Congress."

"Bipartisan consensus will be necessary to bring our debt and deficits under control," Enzi added.

"For the second straight year, House Democrats have failed to produce a budget," Womack said. "That is not leadership."

Democrats do not plan to release a separate budget proposal, pointing to the overall figures for military and nonmilitary spending approved in the summer's bipartisan budget deal.

The Republican from Rogers took aim at the budget proposal's expectations of annual economic growth, saying: "More work remains to be done to put the country on a solid fiscal path. The assumption of 3% growth and continued low interest rates are critical to achieving balance in the 15-year window."

While the Trump administration has seen quarterly growth exceeding 3%, the administration has never had a full fiscal year of 3% economic growth. The U.S. economy grew 2.3% in the 2019 calendar year, the weakest level since Trump took office.

The proposal also does not detail another round of tax cuts, which the administration has suggested Trump will pursue if he wins reelection. Instead, it would extend for 10 years the expiring cuts contained in the tax overhaul Trump signed in 2017, at an estimated revenue loss of about $1.4 trillion.

The deficit would then steadily decrease to $261 billion in 2030 and be eliminated entirely in 2035.

"We're putting out a plan today that over a period of -- not that long a period of time, brings our budget and our deficit down to what it should be, which is close to zero," Trump said.

Sen. Kevin Cramer, R-N.D., sent out two statements that, while initially complimentary of Trump's efforts to cut federal spending, voiced concern over proposed cuts. Cramer said he disagreed with a number of defense provisions, including "cuts to intelligence-gathering resources for our military."

He also said that cuts to certain farm programs, including a proposed 8% overall reduction at the Agriculture Department, "would save little but inflict severe pain in American agriculture."

PIECES OF THE PLAN

The budget proposal has initiatives of interest to key 2020 battleground states, such as an increase of $250 million to restore Florida's Everglades and a move to finally abandon a multibillion-dollar, never-used nuclear waste dump that's widely unpopular in Nevada.

The Trump budget also promises a $3 billion increase -- to $25 billion -- for NASA in hopes of returning astronauts to the moon and then on to Mars. It touts a 10-year, $1 trillion infrastructure proposal, but $800 billion of that would come through existing surface transportation programs.

The proposal contains a modest parental leave plan championed by the president's daughter and adviser Ivanka Trump, and it includes $135 billion in savings over the coming decade by tackling the cost of prescription drugs in an unspecified way.

Trump's U.S.-Mexico border wall would receive a $2 billion appropriation, more than provided by Congress last year. A fight over last year's $8 billion wall request stalled work on the annual spending bills for months, and analysts believe the reduction to $2 billion could ease the way for action on appropriations bills in the GOP-held Senate.

In previous years, Trump's budget has proposed repealing the Affordable Care Act outright and replacing it with a system that would provide block grants of funding to states. The new budget proposal backs away from that approach. It leaves the law's funding in place but asks Congress to develop policies that would "advance the president's health reform vision," saying that would save $844 billion over the next 10 years.

Trump's proposal would also revive a rejected plan to cut food stamp costs by providing much of the benefit as food shipments instead of cash. He's also proposing work requirements for programs such as Medicaid, food stamps and federally subsidized housing.

The budget also proposes creating an entirely new agency to police tobacco, moving that responsibility out of the Food and Drug Administration and into the Department of Health and Human Services.

"This continues to be a budget that funds priorities where the president supports spending money," Vought told reporters. "We are trying to fund what his priorities are, what his campaign commitments are, and finding savings and inefficiencies where we possibly can."

Information for this article was contributed by Andrew Taylor of The Associated Press; by Jim Tankersley, Margot Sanger-Katz, Alan Rappeport, Emily Cochrane and David E. Sanger of The New York Times; and by Jeff Stein, Erica Werner and Tracy Jan of The Washington Post.