He applauds Barr for sentencing change by Compiled by Democrat-Gazette staff from wire reports | February 13, 2020 at 7:06 a.m. 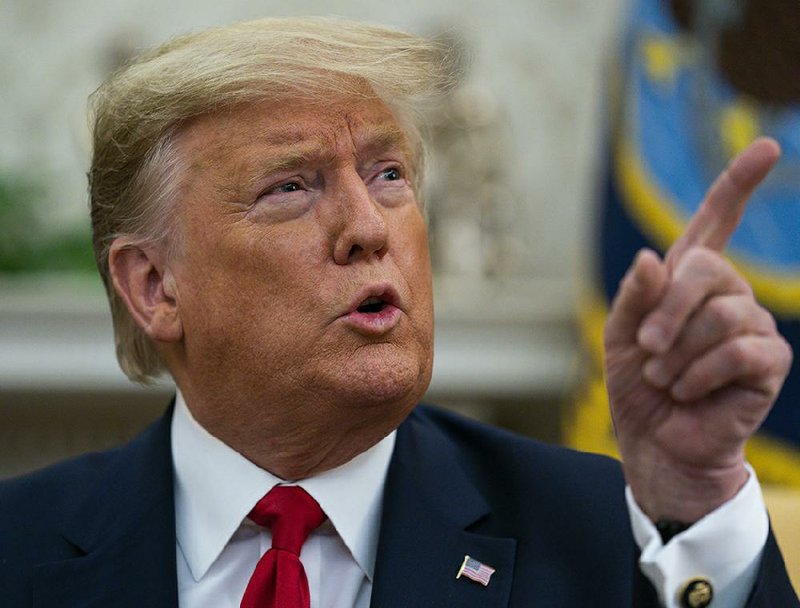 “You have murderers and drug addicts that don’t get nine years. Nine years for doing something that no one can even define what he did,” President Donald Trump said Wednesday in defending Roger Stone. He said prosecutors “ought to apologize.” More photos at arkansasonline.com/213meeting/. (AP/Evan Vucci)

Later Wednesday, Trump said that Stone was treated "very badly," and that prosecutors "ought to apologize to him."

Speaking to reporters in the Oval Office ahead of a meeting with President Lenin Moreno of Ecuador, Trump denied that his tweet about Barr was political and called the prosecution of Stone "a disgrace."

In November, Stone was convicted of obstructing a congressional inquiry -- the House Intelligence Committee's examination of Russian interference in the 2016 election -- lying to investigators under oath and trying to block the testimony of a witness who would have exposed his lies.

[Video not showing up above? Click here to watch » https://www.youtube.com/watch?v=X527HEVh3sA]

Also on Wednesday, Trump withdrew the nomination of a former federal prosecutor to oversee sanctions at the Treasury Department. Jessie Liu had been the U.S. attorney in charge of the office that prosecuted Stone.

Treasury Secretary Steven Mnuchin declined to say why the nomination was pulled at a Senate Finance Committee hearing on Wednesday. But he told reporters that Trump wasn't retaliating against her.

Trump nominated Liu in December as the Treasury Department's undersecretary for terrorism and financial crimes. Her confirmation hearing before the Senate Banking Committee had been scheduled for today.

Asked whether he would pardon Stone, the president said, "I don't want to say that yet, but I tell you what, people were hurt viciously and badly by these corrupt people."

He added that it was unfair that prosecutors recommended that Stone be sentenced to nine years in prison when James Comey, the former FBI director, has not been jailed.

"You have murderers and drug addicts that don't get nine years," the president said. "Nine years for doing something that no one can even define what he did."

Asked what lessons he learned from having been impeached and acquitted, Trump said that "the Democrats are crooked. They got a lot of crooked things going. That they're vicious. That they shouldn't have brought impeachment."

One of Trump's tweets referred by name to U.S. District Judge Amy Berman Jackson, who is presiding over the case.

"Is this the Judge that put Paul Manafort in SOLITARY CONFINEMENT, something that not even mobster Al Capone had to endure?" Trump wrote, posting another tweet that named Jackson. "How did she treat Crooked Hillary Clinton? Just asking!"

Jackson oversees D.C. and is scheduled to sentence Stone on Feb. 20.

The Justice Department said Tuesday that the Stone case was not discussed with anyone at the White House. The decision to override the recommended sentence was made by officials from the offices of Barr and the deputy attorney general.

The president's comments come less than 24 hours after four career prosecutors withdrew from the Stone case after the department overruled their recommended seven- to nine-year term for Stone, a sentence Trump had publicly criticized.

Aaron Zelinsky, a member of former special prosecutor Robert Mueller's team, quit the case and his job in Washington, with plans to return to his position as a federal prosecutor in Baltimore.

Another early Mueller team member, Adam Jed, also withdrew from the case. His status at the Justice Department was unclear.

Another federal prosecutor in Washington, Michael Marando, withdrew from the case, and a fourth trial team member, Jonathan Kravis, resigned his position as an assistant U.S. attorney.

"Who are the four prosecutors (Mueller people?) who cut and ran after being exposed for recommending a ridiculous 9 year prison sentence to a man that got caught up in an investigation that was illegal, the Mueller Scam, and shouldn't ever even have started?" Trump tweeted, referring to Mueller's Russia probe that led to Stone's conviction.

The initial sentencing recommendation for Stone was filed late Monday. On Tuesday, it was amended and refiled stating that the earlier version "did not accurately reflect the Department of Justice's position on what would be a reasonable sentence in this matter." The Justice Department instead suggested an unspecified term.

The department's action Tuesday came after a Fox News report on the recommendation and a Twitter post by Trump who criticized "horrible and very unfair" punishment for Stone.

Presidents typically have avoided interfering in Justice Department decisions to avoid allegations of improper influence, though there is no law against it.

Walter Shaub, the former head of the Office of Government Ethics, likened Tuesday's actions to those in countries with authoritarian regimes.

"A corrupt authoritarian and his henchmen are wielding the Justice Department as a shield for friends and a sword for political rivals," Shaub said Wednesday in a Twitter post. "It is impossible to overstate the danger."

Democrats have called for an independent evaluation of the decision-making process.

"I do not take a position on the proper prison term for Mr. Stone, but it would be a blatant abuse of power if President Trump has in fact intervened to reverse the recommendations of career prosecutors at the Department of Justice," said Rep. Adam Schiff, D-Calif.

Schiff led the House impeachment team's arguments that the president should be removed from office. Schiff is also chairman of the House Intelligence Committee, which Stone was convicted of obstructing.

Sen. Charles Schumer of New York, the Democratic leader, sent a letter to the Justice Department's inspector general, calling for him to "immediately investigate." He also blamed Republican senators for not convicting Trump earlier this month during his impeachment trial.

"President Trump didn't learn any 'lessons' when you excused his abuse of power," Schumer said in a Twitter post Wednesday. "And now you are responsible for every new abuse he commits."

On Wednesday, Graham told CNN that he had spoken with the Justice Department and that it did not appear such a harsh sentence was necessary. He also said there was a letter from a victim who disputed feeling threatened.

"I don't think any of us should tweet about an ongoing case, but having said that, I appreciate the Department of Justice making sure that their recommendations to the court are to seek justice for the law as it's written," Graham said.

Asked about the developments Tuesday, more than six Republican senators said they were not familiar with the Justice Department's position and could not comment.

"I do not have an opinion on that," Sen. Mitch McConnell, R-Ky., and the majority leader, said at his weekly news conference.

"I have no idea if the change was in the works already or they were reacting to the president's tweets," Rubio said Tuesday. "But it is not uncommon for the front-line prosecutor to come up with a recommendation and their superiors, or in many cases the judge themselves, comes in with something else."

Meanwhile, Barr has agreed to testify before the House Judiciary Committee next month, appearing for the first time before the panel.

Committee Chairman Jerrold Nadler, D-N.Y., released a letter Wednesday to Barr "to confirm your agreement to testify" on March 31. In the letter, Nadler and committee Democrats write that they have concerns that Barr has misused the criminal-justice system for political purposes.

"In your tenure as attorney general, you have engaged in a pattern of conduct in legal matters relating to the president that raises significant concerns for this committee," Nadler and the Democrats wrote.

The Justice Department confirmed Barr would testify. His appearance will be the first before the House Judiciary panel since he became attorney general a year ago, and since he declined an invitation to testify about Mueller's report after it was released.

The Democrats said they plan to ask Barr about the department's decision to overrule the four federal prosecutors and lower the amount of prison time it would seek for Stone.

They said they will also ask Barr about his department's announcement that it is taking information that Trump's personal lawyer Rudy Giuliani is gathering in Ukraine about former Vice President Joe Biden and his son. The House voted in December to impeach Trump on charges that he pressured Ukraine to investigate Democrats; the Senate acquitted him this month.

Information for this article was contributed by Eileen Sullivan of The New York Times; by Mary Clare Jalonick, Michael Balsamo, Padmananda Rama, Eric Tucker, Jill Colvin and Kevin Freking of The Associated Press; by Josh Wingrove of Bloomberg News; and by Allyson Chiu of The Washington Post. 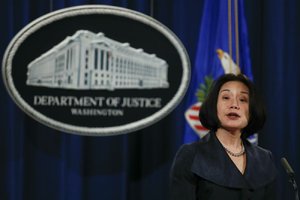 In this Dec. 15, 2017 file photo, Jessie Liu, then U.S. Attorney for the District of Columbia, speaks during a news conference at the Justice Department in Washington. (AP Photo/Carolyn Kaster) 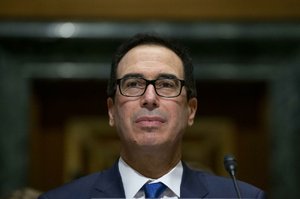 Photo by AP
Treasury Secretary Steve Mnuchin pauses as he testifies during a hearing of the Senate Finance Committee on "The President's Fiscal Year 2021 Budget," on Capitol Hill, Wednesday, Feb. 12, 2020, in Washington. (AP Photo/Alex Brandon)