Hogs: No fowl cries with fouls 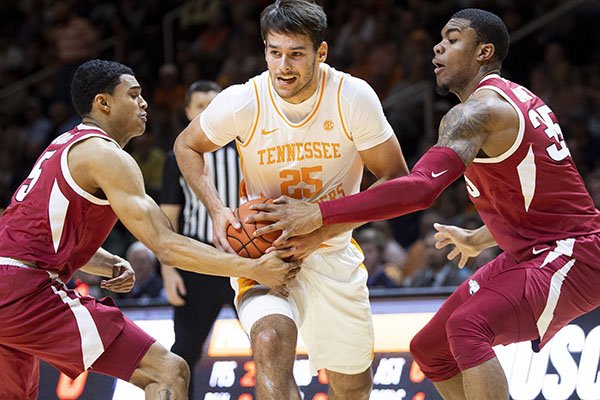 FAYETTEVILLE -- The University of Arkansas men's basketball team was called for more fouls in its past two games than any of the previous 22.

Arkansas had 24 fouls at the end of regulation at Missouri, which would be the second-highest total for a game this season after the 26 at Tennessee.

In three other overtime games the Razorbacks had 22 fouls at Georgia Tech, 23 at Western Kentucky and 22 against Auburn.

[Video not showing up above? Click here to watch » https://www.youtube.com/watch?v=LxBYTtNglR0]

After averaging 18.9 fouls in the first 22 games -- including three in overtime -- Arkansas has averaged 29 in the past two.

Why 10 more fouls per game at Missouri and Tennessee than the season average?

"There's so many things," Razorbacks Coach Eric Musselman said. "No excuses, but you ask a question, and with Isaiah [Joe], he's not a high foul guy."

Joe, the Razorbacks' sophomore guard who underwent arthroscopic knee surgery on Feb. 1, will miss his fourth consecutive game when Arkansas (16-8, 4-7 SEC) plays Mississippi State (15-9, 6-5) at noon Saturday at Walton Arena. He's averaging 1.8 fouls per 40 minutes, according to analytics website KenPom.com -- the lowest ratio for any of the Razorbacks' nine scholarship players.

"So you take [Joe's] 32 minutes out ... and then you're putting somebody in who maybe is a high foul guy," Musselman said. "We have some players who are foul prone whether they play in our system or a past system. They're high foul guys per minute."

Reggie Chaney, a 6-8 sophomore who has started the last five games and seen his minutes increase in Joe's absence, is averaging 6.6 fouls per 40 minutes.

Among Arkansas' other forwards the fouls to 40 minutes played is 8.0 for Ethan Henderson, 5.6 for Jeantal Cylla and 5.4 for Adrio Bailey.

"All we can do is continue to point it out to the guys, show the fouls on film," Musselman said of trying to foul less while playing aggressive man-to-man defense. "Fouling against Mississippi State was a concern last game."

Arkansas was called for 23 fouls and Mississippi State hit 27 of 31 free throws in a 77-70 victory over the Razorbacks on Jan. 22 in Humphrey Coliseum.

"We went back, and the natural thing is, are they hurting us in pick-and-rolls or post-ups?" Musselman said of reviewing tape of the first Arkansas-Mississippi State game. "They just hurt us off us committing fouls that had nothing to do with the play.

"I'm sure there's people sitting at home watching and saying, 'How do you make that foul?' I'm saying the same thing during the game.

"We have to get better without fouling. But there is a little bit of give and take, too. We lead the nation in defending the three-ball [holding opponents to 25.1%], which is great. High schools, AAU, NBA, college, they're all talking analytics and shoot the three. That's the way to win."

With Chaney and the 6-8 Henderson the tallest scholarship players for the Razorbacks along with the 6-6 Bailey, Musselman said the Razorbacks knew three-point defense would critical to limit perimeter scoring by bigger opponents.

"Arguably, the three-point shot is the biggest thing that can change the games," Musselman said. "That's probably, quite honestly, why we've been in a lot of games all year."

Mississippi State 6-10 sophomore Reggie Perry had 26 points and 13 rebounds against the Razorbacks earlier this season when he hit 14 of 15 free throws.

It was the most free throws for an opposing player against Arkansas this season ahead of Missouri guard Xavier Pinson hitting 12 of 13.

Perry drew nine fouls against the Razorbacks, including four when he was shooting. Bailey fouled him four times. Chaney had two fouls -- one against Perry -- in 17 minutes.

"The fouls we committed [on Perry] were our four and five men fouling him on non-scoring type plays," Musselman said. "So we've got to get better at not fouling people when they're not in a scoring area.

"If he gets off to a great start and we're guarding him with the same people as last time, then maybe Jamario [Bell] goes in."

"I don't know," Musselman said of playing Bell on Saturday. "Don't say it's going to happen. Maybe Ethan gets more minutes on him."

Musselman said playing the 6-7 Cylla on Perry also is an option.

"Cylla actually did a real good job on him [earlier this season]," Musselman said. "Got underneath him instead of playing upright, and I thought that underneath defense was probably as effective as anybody."

"So it's a matter of how much can we get that down?"