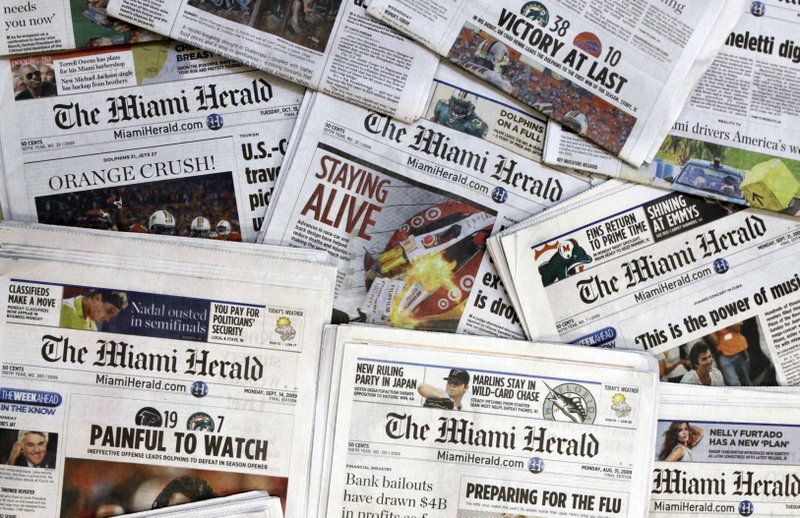 FILE - This Oct. 14, 2009 file photo, shows copies of the McClatchy Co. owned Miami Herald newspaper in Miami. McClatchy Co., the publisher of the Miami Herald, The Kansas City Star and dozens of other newspapers across the country is filing for bankruptcy protection. McClatchy Co. said Thursday, Feb. 13, 2020, that it will continue to run normally as it pursues approval of its restructuring plan under Chapter 11. (AP Photo/Wilfredo Lee, File)

NEW YORK -- McClatchy, the publisher of the Miami Herald, The Kansas City Star and dozens of other newspapers, has filed for bankruptcy protection as it struggles to pay off debt while revenue shrinks because more readers and advertisers are going online.

McClatchy said Thursday that its 30 newspapers will continue to operate normally as it reorganizes under Chapter 11 bankruptcy protection, helped by $50 million in financing from Encina Business Credit.

The company hopes to emerge from bankruptcy protection in a few months, with majority ownership by a hedge fund that's currently McClatchy's largest shareholder and debt holder, Chatham Asset Management. That would end 163 years of family control.

It's also looking to unload its pension obligations to a federal corporation that guarantees pensions, so that employees would get the benefits they were entitled to.

McClatchy did not announce any layoffs and tried to reassure employees, saying that while "we are always looking at opportunities to improve operational efficiencies," the Chapter 11 process is "not geared around cost take-outs."

"When local media suffers in the face of industry challenges, communities suffer: polarization grows, civic connections fray and borrowing costs rise for local governments," Chief Executive Officer Craig Forman said. "We are moving with speed and focus to benefit all our stakeholders and our communities."

In a statement, Chatham said it was "committed to preserving independent journalism and newsroom jobs." Chatham said it has been "a supportive investor" in McClatchy since 2009.

The newspaper industry has been deeply hurt by changing technology that has sent the vast majority of people online in search of news. Media companies have tried to shift online, with varying degrees of success, as their print ad revenue and circulation declined. Complicating matters is that internet companies Facebook and Google get most online ad dollars.

While some national newspapers, like The Wall Street Journal and The New York Times, are adding digital subscribers, helping them navigate advertising declines, many local outlets have had a difficult time. That has led to a string of consolidations, much of it involving investment firms, deepening concerns about declining quality as newsrooms shrink and newspapers close.

Gannett, the USA Today publisher, was bought last year by GateHouse, a chain managed by private equity firm Fortress, in a deal helped by a high-interest, $1.8 billion loan from another financial firm, Apollo. It is the largest newspaper chain in the U.S. Another large chain, MediaNews, is owned by a hedge fund with a reputation for cutting costs and jobs, Alden Global.

Newspaper companies have been through a string of Chapter 11 reorganizations in recent years. The publisher of The Philadelphia Inquirer and Philadelphia Daily News emerged from bankruptcy protection in 2010, Chicago Tribune and The Baltimore Sun publisher Tribune Co. in 2012 and GateHouse in 2013.

McClatchy's bankruptcy filing "rings an alarm bell for local news," Poynter media business analyst Rick Edmonds said. "McClatchy's problems are very typical for those of local newspapers," he said, as the industry deals with an old business model that's deteriorating faster than digital and other new revenue are increasing.

McClatchy's 2006 purchase of the Knight-Ridder newspaper chain for $4.5 billion added to McClatchy's debt and contributed to its financial woes as the industry's decline accelerated in subsequent years.

Though financial results aren't yet final, the company estimates that 2019 revenue fell 12.1% from the previous year, its sixth consecutive annual decline. McClatchy said its digital-only subscriptions have grown almost 50% to 200,000 over the past year.

But that growth hasn't made up for the loss of advertising revenue that once flowed to its print newspapers.

McClatchy has struggled to pay money owed to its pension fund and has been in negotiations with the Pension Benefit Guaranty Corp., a federal guarantor of pensions, to assume control. In Thursday's filing with U.S. Bankruptcy Court in New York, it is seeking permission to appoint that corporation as the plan's trustee. McClatchy said "substantially all" of the plan's participants and beneficiaries should get their entitled benefits.

McClatchy plans to pull its listing from the New York Stock Exchange as a publicly traded company. Chatham Asset will be the new majority owner. Chatham also is the majority shareholder of Canadian newspaper chain Postmedia and owns National Enquirer publisher American Media Inc. American Media is in the process of selling the Enquirer.

Information for this article was contributed by Josh Funk of The Associated Press.