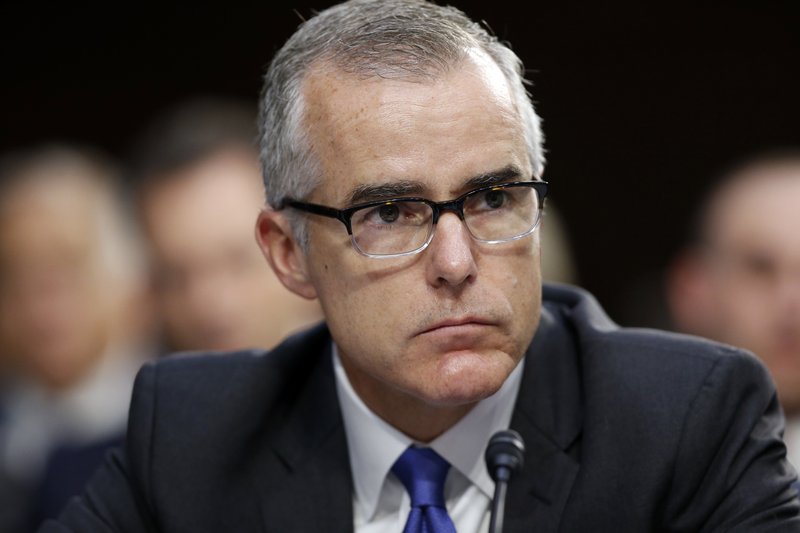 Andrew McCabe, then-acting director of the FBI, testifies at a Senate intelligence hearing on Capitol Hill in Washington, June 7, 2017. McCabe, the former deputy FBI director and a frequent target of President Trump, will not face charges in an investigation into whether he lied to investigators about a media leak, his defense team said on Friday, Feb. 14, 2020. (Doug Mills/The New York Times)

The step was taken as part of a criminal investigation that began nearly two years ago with a referral from the Justice Department's inspector general's office, which concluded that McCabe had repeatedly lied about having authorized a subordinate to give information to a newspaper reporter for a 2016 article about an FBI investigation into the Clinton Foundation.

The case was handled by the U.S. attorney's office in Washington.

Separately, the Justice Department has begun reviewing the handling of the case against former national security adviser Michael Flynn, a person familiar with the matter said Friday.

It was not immediately clear what had prompted a review of the Flynn case, though the person familiar with the matter said U.S. Attorney Jeff Jensen of St. Louis was working on it. The New York Times first reported Jensen's involvement.

On Friday, prosecutors notified McCabe's attorneys in a phone call and a letter that they were closing the case. The letter, signed by the chief of the office's public corruption unit, did not give a precise reason but said the decision was reached after "careful consideration" and "based on the totality of the circumstances and all of the information known to the government at this time."

McCabe's lawyers, Michael Bromwich and David Schertler, said they were gratified by the decision.

"At long last, justice has been done in this matter," the lawyers said in a statement. "We said at the outset of the criminal investigation, almost two years ago, that if the facts and the law determined the result, no charges would be brought."

Speaking Friday on CNN, where he works as a contributor, McCabe said it was an "absolute disgrace" that the investigation had taken so long and that he was relieved to be done with a process that he described as "so unbelievably tense."

McCabe has denied that he intentionally misled anyone. He has said his 2018 firing -- for what the Justice Department called "lack of candor" -- was politically motivated. He sued the Justice Department in August, saying officials had used the inspector general's conclusions as a pretext to rid the FBI of leaders Trump perceived as biased against him.

Attorney General William Barr, who before speaking out in a television interview, had privately complained to aides and the president himself that Trump's comments about the Justice Department were undercutting his job and raising questions about the department's credibility.

The president has complained that others have not been charged, including former FBI Director James Comey and his associates.

The president was upset that no charges were filed over Comey's handling of memos about his interactions with Trump, a matter that was referred to the Justice Department for potential prosecution, according to a White House official and Republican close to the White House who weren't authorized to speak publicly about private discussions and spoke on condition of anonymity.

Trump did not address the McCabe matter during a media appearance Friday.

A White House official, speaking on the condition of anonymity to reveal internal discussions, said Trump "believes very strongly that action should be taken."

According to materials made public Friday in a Freedom of Information Act case over the investigation, a federal judge in the District of Columbia warned prosecutors in the case that the public was watching, and comments from the White House were detrimental.

"I just think it's a banana republic when we go down that road and we have those type of statements being made that are conceivably, even if not, influencing the ultimate decision. I think there are a lot of people on the outside who perceive that there is undue inappropriate pressure being brought to bear," the judge, Reggie Walton, said of Trump's earlier public comments regarding McCabe.

He added later: "I think as a government and as a society we're going to pay a price at some point for this."

The decision to spare McCabe criminal charges eliminates the prospect of a trial that would have refocused public attention on 2016, when the FBI was entangled in presidential politics through investigations touching both main contenders -- Democrat Hillary Clinton and Trump, her Republican opponent.

The criminal investigation arose from an October 2016 story in The Wall Street Journal that described internal debates at the FBI and the Justice Department weeks before the presidential election about how aggressively the Clinton Foundation should be investigated. The article recounted a particularly tense phone call between McCabe and a senior Justice Department official.

The inspector general's report said McCabe authorized two FBI officials to speak for a Wall Street Journal report detailing tension inside the FBI and Justice Department over the Clinton email case and a separate investigation of the Clinton family foundation. But he initially denied having done so when FBI officials -- and, later, the inspector general's office -- tried to determine who might have spoken to the media.

The inspector general accused McCabe of lying at least four times, three of them under oath, and even misleading Comey, his boss at the time.

McCabe has denied any wrongdoing and has said he was distracted by the tumult surrounding the FBI and the White House during the times he was questioned. One of the interviews took place the same day that Comey was fired.

"During these inquiries, I answered questions truthfully and as accurately as I could amidst the chaos that surrounded me," McCabe has said in a statement. "And when I thought my answers were misunderstood, I contacted investigators to correct them."

McCabe took over as chief of the FBI after Trump fired Comey from the post in May 2017. McCabe has alleged that Trump in one of their early talks called his wife, Jill McCabe, a "loser" because of her failed run for a state Senate seat in Virginia.

Trump denied that. The president, though, has tweeted about McCabe, calling the day he was ousted from the bureau a "great day for Democracy," alleging McCabe damaged the bureau's reputation and suggesting he should be charged with a crime.

Information for this article was contributed by Eric Tucker, Michael Balsamo and Jonathan Lemire of The Associated Press; and by Matt Zapotosky, Devlin Barrett, Karoun Demirjian, Josh Dawsey and Spencer S. Hsu of The Washington Post.