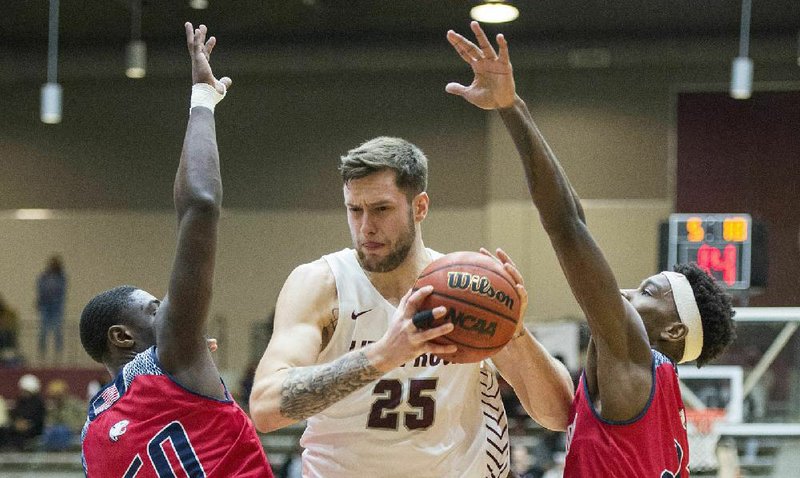 UALR’s Nikola Maric (25), a 6-10 sophomore forward from Bosnia-Herzegovina, and another player from Europe, 6-7 freshman guard Marko Lukic of Serbia, have helped put the Trojans in contention for the Sun Belt Conference title after being suspended for the first 16 games of the season. (Democrat-Gazette file photo)

The University of Arkansas at Little Rock men's basketball team didn't have much depth to work with during the first half of the season.

The Trojans consistently relied on a seven-man rotation and had multiple guys playing nearly 40 minutes per night.

But it didn't prevent the Trojans from a rather blistering start, as the team had marched to 11-5 and a 5-0 Sun Belt Conference mark by Jan. 6.

This was despite key injuries early in the season to returning junior forward Kris Bankston (back) and junior guard Alsean Evans (toe), a junior-college transfer from Florida. The duo combined to play in five games, and both are expected out for the season.

And this was despite 16-game suspensions doled out by the NCAA to a pair of talented European players -- sophomore forward Nikola Maric and freshman guard Marko Lukic.

"Any coach in America would be more excited, because we were really shorthanded," Walker said. "You're talking about two guys [Bankston and Evans], major plugs to our team, that [were] out. So to have two more guys [Maric and Lukic] to add to the lineup, two more guys that offensively are really good, I just thought that was a blessing in disguise.

"But at the end of the day, they still had to figure out how to fit in with what this team had been doing for the first 15, 16 games."

But in a season that's seen UALR (18-9, 12-4 Sun Belt) improve from 10 victories to first place in the conference, the additions of Maric and Lukic provided the Trojans with the extra punch off the bench they were lacking.

"Before everything, we couldn't give a breather to other guys that had to play a lot of minutes," Maric said. "So now we [can], everyone brings more energy when it gets to the game. But especially, I think, we are offensively helping a lot, and defensively, we both bring length."

Both Maric and Lukic have had their ups and downs since returning against Troy on Jan. 9, a span of 11 games. UALR is 7-4 during that stretch.

Lukic, a 6-7, 195-pound guard from Belgrade, Serbia, is averaging 9.3 ppg and shooting 38.9% from beyond the arc. The Trojans' calling card isn't normally three-point shooting, but having Lukic on the floor has made UALR tougher to defend on the perimeter.

For Walker, the best part is the two are underclassmen with plenty more basketball left under his tutelage.

"I think Niko played better last year than he's playing right now, but I think the last couple of games, you can see that he's coming on a little bit," Walker said. "Marko's still trying to figure some things out offensively and defensively, but they both have big-time potential."

Walker didn't want to delve too deep into the specifics of why Maric and Lukic were suspended for the first half of the season. He said Maric's situation involved questions over whether a family friend served as his agent, but Walker said Maric never had an agent.

Lukic's situation involved exceeding a monetary benefit while he played on an under-20 team in Kazakhstan.

For the first 16 games, neither could even sit on UALR's bench.

Lukic's punishment was a bit more strict. Unlike Maric -- who was cleared to practice less than three weeks before the season opener, and was allowed to play in the preseason exhibition against the University of Arkansas on Oct. 20 -- Lukic wasn't allowed to practice with the Trojans. He said he practiced by himself early in the morning at the Jack Stephens Center.

"It was a mental battle for both Niko and me because we went through some hard times," Lukic said. "It's hard for someone to tell you you can't play for a certain amount of games, especially when it's half of the season. We just stayed ready mentally. We worked on ourselves. We worked on our game every day, and it paid off."

Walker is still befuddled by the practice restriction on Lukic.

"It's just unbelievable, but it is what it is," Walker said. "You could sit here and go around and round with the NCAA. I'm not gonna do that. It put that kid behind, it didn't help Niko, but at the end of the day, we're lucky to get those guys back, and we're gonna try to roll with them."

Each has had his moments since returning.

Lukic had a three-game stretch from Jan. 30-Feb. 8 when he averaged 17 ppg and hit 8 of 16 from three-point range, which included a career-high 22 points in a home win over Coastal Carolina. Over the past three games, Maric has averaged 12 points and 6 rebounds while shooting 62.5%.

UALR has dropped back-to-back games but still holds a one-game lead in the Sun Belt with four games remaining. Maric and Lukic hope to lift the Trojans to their first regular-season conference title since 2015-16.

"Nobody expected us to be here and be successful like we are now," Lukic said. "We just got to keep it going, one game at a time, as Coach [Walker] always says." 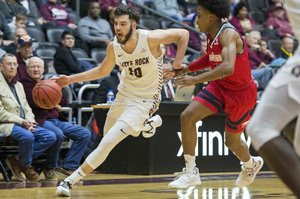 Guard Marko Lukic has averaged 9.3 points per game and shot 38.9% from three-point range for UALR in 11 games this season. (Democrat-Gazette file photo) 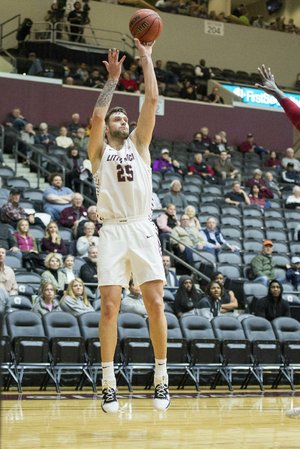 UALR forward Nikola Maric (shown) and guard Marko Lukic have provided the Trojans with added punch off the bench. “But especially, I think, we are offensively helping a lot, and defensively, we both bring length,” Maric said. (Democrat-Gazette file photo)