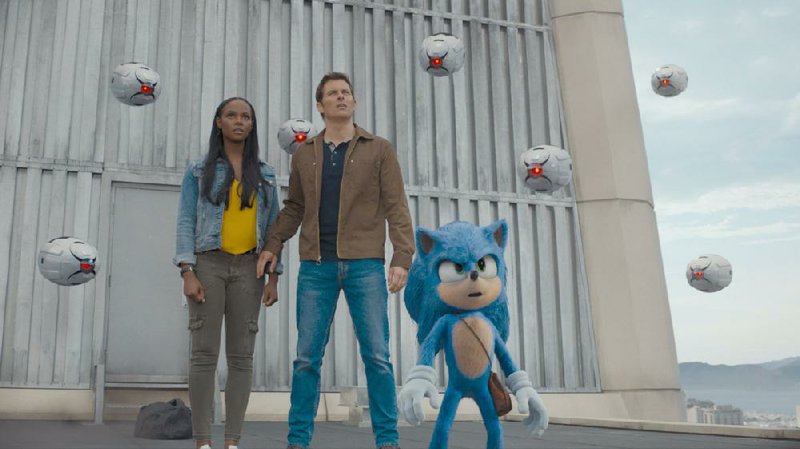 Tika Sumpter (left) and James Marsden star with the computer animated Sonic (voice of Ben Schwartz) in Paramount Pictures and Sega’s Sonic the Hedgehog. The film premiered in first place and made about $57 million.

LOS ANGELES -- In a weekend bookended by two holidays -- Valentine's Day on Friday and Monday's Washington's Birthday (observed) -- the box office enjoyed an increasingly rare slate of three (out of four) new releases landing among the top five.

Paramount's Sonic the Hedgehog premiered in first place with $57 million, above analyst forecasts of $40 million to $45 million for the weekend.

Based on the Sega video-game character, the live-action and computer-generated imagery (CGI) hybrid follows Sonic (voiced by Ben Schwartz) and a small-town sheriff, Tom (James Marsden), as they defend a planet under attack by the villain Dr. Robotnik (Jim Carrey).

"If you don't listen to your customer, and this goes for any business, then you're going to fail," said Chris Aronson, distribution chief for Paramount. "We retooled Sonic in a way that was obviously very satisfying for the fans, and they were very forgiving. Now that they've seen the movie, they love the movie. It all worked out."

The $87 million film, directed by Jeff Fowler, was forced to undergo a major redesign last year after fans reacted to Sonic's CGI look in a trailer. The effort seems to have paid off -- the movie was well-received with an A CinemaScore and a 63% fresh rating on review aggregation site Rotten Tomatoes.

It surpassed Warner Bros.' Pokémon Detective Pikachu, which earned $54.3 million in its 2019 debut, as the highest domestic opening ever for a video-game adaptation.

At No. 3, Columbia's Blumhouse-produced Fantasy Island opened with $12.4 million over the weekend, within range of analyst predictions for the weekend of $12 million to $14 million.

A reimagining of the '70s TV series, Fantasy Island was directed by Jeff Wadlow and stars Michael Pena as the enigmatic Mr. Roarke, who is tasked with bringing his guests' fantasies to life at a remote tropical resort.

In fourth place, Universal's The Photograph opened with $12.3 million over the weekend and is projected to earn $13.4 million through Monday, within range of analyst predictions of $12 million to $14 million.

The romantic drama stars Issa Rae as a woman who falls for a journalist (Lakeith Stanfield) and comes to terms with her estranged photographer mother's complex past.

Directed by Stella Meghie, the $16 million movie was positively received with a B-plus CinemaScore and a 76% Rotten Tomatoes rating.

Rounding out the top five, Columbia's Bad Boys for Life added $11.3 million in its fifth weekend, for a cumulative total of $181.3 million.

In seventh place, Columbia's Jumanji: The Next Level added $5.7 million in its 10th weekend, for a cumulative $305.7 million.

At No. 8, Neon's Parasite -- buoyed by its fours Oscars as best picture, director, original screenplay and best international feature at last week's Oscars ceremony -- added 941 locations and $5.5 million in its 19th weekend, for a cumulative $43.2 million.

In ninth place, Universal's Dolittle added $5.1 million in its fifth weekend, for a cumulative $70.5 million.

Rounding out the top 10, Searchlight's Downhill opened with $4.7 million through the weekend and was projected to earn $5.2 million through Monday, below analyst projections of $7 million.

A remake of Ruben Östlund's Force Majeure, the black comedy stars Will Ferrell and Julia Louis-Dreyfus as a married couple on the outs.

It premiered at the Sundance Film Festival to mixed reviews and was poorly received by moviegoers and critics with a D CinemaScore and a 41% rotten rating on Rotten Tomatoes.