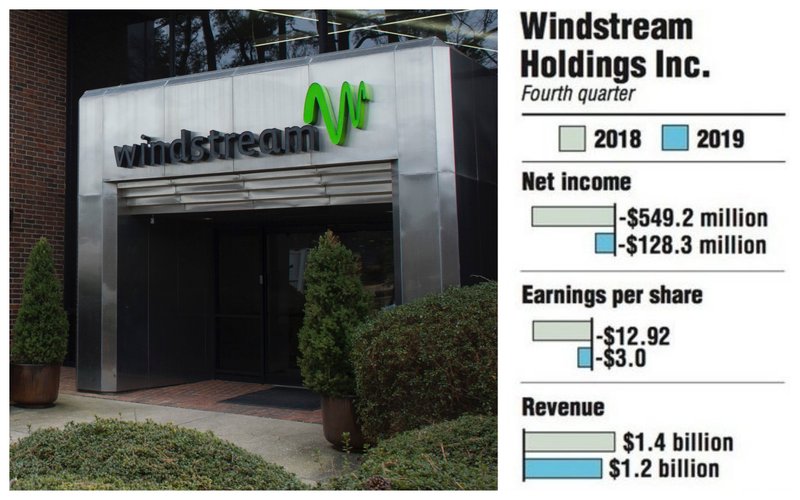 Windstream Holdings Inc. announced another quarterly loss on Thursday as public reports indicate the communications provider is close to settling a dispute that stands to smooth its financial outlook.

The Little Rock company reported a loss of $128.3 million in the fourth quarter that ended Dec. 31. For the full year, Windstream recorded a loss of $3 billion as it spent most of 2019 fighting on two fronts: doing business while working through bankruptcy and battling Uniti Group Inc. over a costly fiber leasing agreement.

Though it continues to experience financial challenges, Windstream is making progress in adding customers attracted to higher broadband speeds. "This represents a large opportunity we have in front of us as a company to upsell our faster speed capabilities to larger portions" of the customer base, Chief Executive Officer Tony Thomas said Thursday in remarks delivered in conjunction with the earnings report release.

Customer growth improved in the quarter as Windstream expanded its consumer broadband business for the seventh-consecutive quarter. The company added 9,300 new customers in the fourth quarter. In 2019, Windstream added about 28,000 net broadband subscribers for the year, achieving its second-consecutive year of growth and almost doubling what it achieved in 2018.

For its enterprise division, which focuses on business customers, revenue increased 38% year over year.

For now, most attention regarding Windstream is turned to its efforts to settle a lease dispute with Uniti Group of Little Rock. Last July, Windstream sued to recharacterize the leasing agreement, which mandates that Windstream pay $650 million annually to lease fiber lines from Uniti. Windstream contends the rates are too high.

On Tuesday, Windstream revealed new terms of a settlement proposal being discussed with Uniti. The two are scheduled to go to trial March 2-6 before Judge Robert Drain in U.S. Bankruptcy Court in the southern district of New York.

Since the terms were disclosed, three independent analyses have reported that a deal to settle the leasing dispute is expected to be announced before the trial.

"Both sides seem to be converging towards a deal and the question remains whether or not they settle or go to court," Citi Research noted in its analysis this week.

Similar reports were issued by Bloomberg Intelligence and Cowen Research.

Bloomberg noted that the companies have "agreed on most economic terms" in settlement talks.

Windstream officials are tight-lipped about whether a settlement will be announced soon.

"Windstream remains focused on securing a result that maximizes value for all company stakeholders," Thomas said as part of the earnings announcement. "As part of this process, Windstream continues to work to modify our arrangement with Uniti. Absent an acceptable negotiated resolution, Windstream is prepared to pursue its litigation claims to conclusion."

Likewise, Uniti officials have not commented on the negotiations and the company has not announced a date to release fourth-quarter earnings, further fueling speculation that a deal is close.

The company announced Wednesday that Mark Wallace, the chief financial officer, and Bill DiTullio, vice president of finance, will participate in a JPMorgan investors conference on Tuesday in Miami.

Windstream is moving ahead with providing strategic products for consumers and business customers, Thomas said in Thursday's remarks.

"We also continued to see strong growth in 2019 in sales of enterprise strategic products and services, helping offset overall revenue pressures," Thomas said. "While we are admittedly in a more challenging competitive situation during the restructuring process, we are taking aggressive actions to improve the current top-line trends by increasing strategic product adoptions and conversions and improving profitability levels across our legacy, core and strategic enterprise customer base."

Increased market share in the consumer business is driven by Windstream delivering faster broadband to households, Thomas said. About 42% of the homes served by Windstream broadband can get speeds of 100 megabits per second. That's well above the 15% of households that received that speed level in 2018.

In 2019, Windstream upgraded speeds to 1.3 million homes. Thomas noted that the company has been "aggressively investing in our [incumbent] network to push faster broadband speeds to more and more customers."

CORRECTION: Uniti Group’s Chief Financial Officer Mark Wallace and Vice President of Finance Bill DiTullio will participate in a J.P. Morgan investors conference on Tuesday in Miami. The conference date was incorrectly reported in an earlier version of this story.