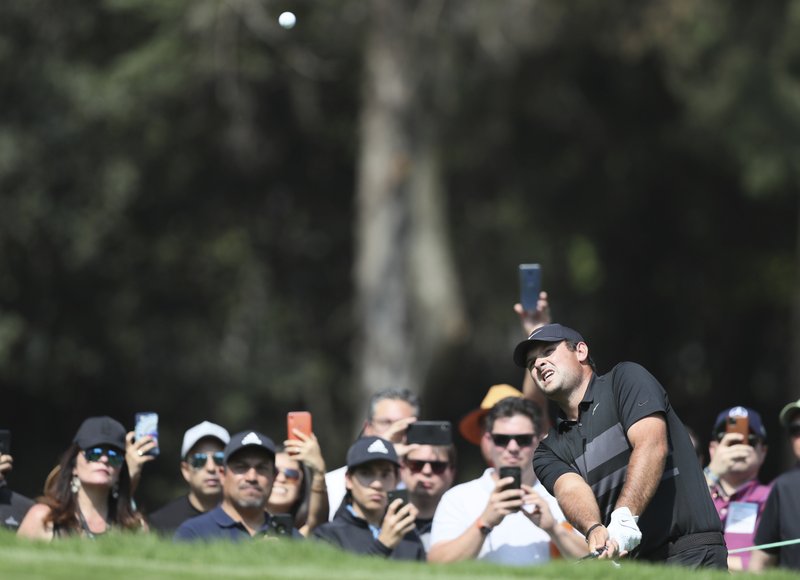 Patrick Reed of the United States approaches to the third green during the final round for the WGC-Mexico Championship golf tournament, at the Chapultepec Golf Club in Mexico City, Sunday, Feb. 23, 2020.(AP Photo/Fernando Llano)

MEXICO CITY -- Patrick Reed was more concerned about how to save par than how to answer his critics. He was consumed with navigating around the trees from 152 yards away with a gap wedge more than any chatter about his character.

Reed only plays for himself. And when it feels as though the world is against him, he plays his best.

A week that began with Brooks Koepka saying he thought Reed cheated when he was penalized for swiping away sand in the Bahamas ended with Reed delivering clutch moments down the stretch Sunday to win the Mexico Championship..

Two shots behind with four holes to play, Reed ran off three consecutive birdies to overtake a faltering Bryson DeChambeau, closing with a 4-under 67 for his second World Golf Championships title.

As for the outside noise?

"I'm used to it," Reed said. "Honestly, it's one of those things that at the end of the day, all I can control is me and what I do on and off the golf course. And if I feel like I'm improving each day on and off the golf course and setting a good example for the next generation coming up ... then that's all I can do, and I feel like I've been doing a good job of that."

Reed made it interesting in the end with a wild tee shot into the trees on the 18th hole, forcing him to chip back to the fairway. He had to two-putt from 35 feet for eighth victory of his PGA Tour career.

He one-putted 45 times over 72 holes, an astounding performance on the poa greens of Chapultepec. The birdies at the end might not have mattered without par putts from 10 feet on the 11th and 8 feet on the 13th as DeChambeau was starting to pull away.

"And then after that, the hole seemed to get a little larger," Reed said.

In a wild final round in which five players had a share of the lead -- four were tied heading for the back nine -- DeChambeau appeared to seize control with five birdies in a six-hole stretch starting at No. 9.

Everyone around him faltered -- Justin Thomas, Rory McIlroy, Jon Rahm, Erik van Rooyen -- everyone but Reed, who played bogey-free until he only needed a bogey to win.

DeChambeau missed two good scoring chances on the 15th and 16th, and then he three-putted from 65 feet on the par-3 17th to fall into a tie. Reed seized on the moment. Blocked by the edge of the trees left of the 16th fairway, he hammered a hook with a gap wedge that rolled around the ridge and fed down the slope to 3 feet.

Reed never flinched with so much going on around him, on and off the golf course.

He has yet to shake whispers on the tour and heckling from the gallery over the Hero World Challenge in December, when video caught him twice swiping away sand behind his ball in a waste area in the Bahamas. Reed accepted the two-shot penalty and said a different camera angle would have shown his club wasn't as close to the ball as it looked.

Koepka became the strongest voice during an interview Monday with SiriusXM in the Bay Area while he was previewing his title defense at the PGA Championship in May.

"Uh, yeah. I think, yeah, yeah," Koepka said, known for speaking his mind. "I mean, I don't know what he was doing, building sand castles in the sand. But you know, you know where your club is. I mean, I took three months off and I can promise you I know if I touched sand.

Reed said all week that he doesn't listen to what others are playing, he just plays golf.

All he did Sunday was win. If he had anything to prove, it was only to himself.

"Coming into this week, I knew we were in a good pattern and I knew all I needed to do was continue to try to improve on my golf game, but at the same time just block out all the noise, no matter what it was," Reed said. "I feel like I've been able to do that really well throughout my career. ... I've always been able to -- when I get inside the ropes -- just focus on what I need to do, and that's play golf."

DeChambeau walked back across the bridge to the 18th green to congratulate Reed. DeChambeau can appreciate heavy criticism, his variety for his pace of play.

"There's been a lot of stuff said in past years, I guess you could say, with him, and even with me. I feel like unfortunately sometimes we get quite a bad rap," DeChambeau said. "And yeah, there's things that we've done that hasn't been right, but we haven't got really gotten the best rap. ... He's a great player, and he'll be a great player for a long time, and I have a lot of respect for his game." 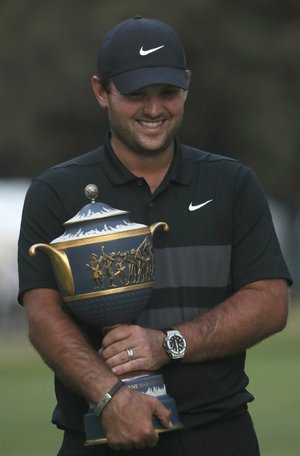 Patrick Reed celebrates after winning the WGC-Mexico Championship on Sunday at the Chapultepec Golf Club in Mexico City. (AP/Fernando Llano)