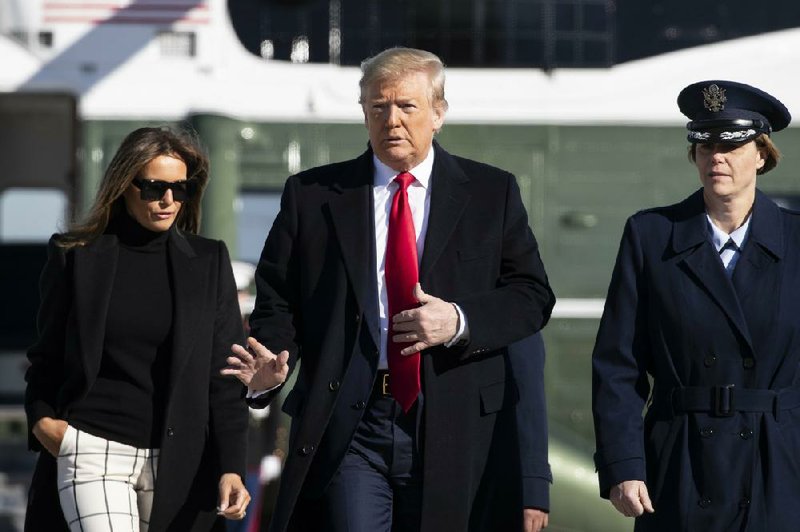 President Donald Trump, accompanied by first lady Melania Trump, waves Sunday as they walk across the tarmac to board Air Force One at Andrews Air Force Base, Md. More photos at arkansas online.com/224india/. (AP/Alex Brandon)

WASHINGTON -- President Donald Trump said Sunday that he's ready to sign a peace deal with the Taliban in Afghanistan if a temporary truce holds in America's longest war. "Time to come home," he said.

The two sides this month announced the truce, which took effect Friday and set the stage for a broader deal aimed at ending 18 years of war in Afghanistan and bringing U.S. troops home.

If the truce proves a success, it will be followed by the signing of the peace accord Saturday, wrapping up the United States' longest-running conflict and fulfilling one of Trump's chief campaign promises.

[Video not showing up above? Click here to watch » https://www.youtube.com/watch?v=IX-a7sXqOOg]

For the Taliban, the successful completion of the truce and Afghanistan peace talks would give the militants a shot at international legitimacy, which they lacked at the time they ran the country and gave Osama bin Laden and his al-Qaida associates safe haven.

U.S. officials have noted the possibility that "spoilers" uninterested in peace talks could disrupt the truce. Determining who is responsible for potential attacks during the seven days will therefore be critical.

"You know we have a certain period of nonviolence. It's been holding up, it's a day and a half, so we'll see what happens. But people want to make a deal, and I think the Taliban wants to make a deal too, they're tired of fighting."

Trump's packed two-day visit to India promises the kind of welcome that has eluded him on many foreign trips, some of which have featured massive protests and icy handshakes from world leaders. He is expected to receive a warm embrace from the ideologically aligned and hug-loving Prime Minister Narendra Modi, complete with a massive rally soon after his arrival today and then a sunset visit to the Taj Mahal.

After the prime minister was met with a "Howdy Modi" rally in Houston last year that drew 50,000 people, Modi will return the favor with a "Namaste Trump" rally (it translates to, "Greetings, Trump") at the world's largest cricket stadium in the western Indian city of Ahmedabad. Tens of thousands of people are expected to line the streets.

Modi "told me we'll have 7 million people between the airport and the event," Trump said to reporters Tuesday, then raised the anticipated number to 10 million when he mentioned the trip during a Thursday night rally. Indian authorities expect closer to 100,000.

"I'll never be satisfied with a crowd if we have 10 million people in India," Trump said. And as he left the White House on Sunday for the flight to India, the upcoming spectacle was on the president's mind again: "I hear it's going to be a big event. Some people say the biggest event they've ever had in India. That's what the prime minister told me -- this will be the biggest event they've ever had."

Trump's motorcade will travel amid cheers from carefully picked and screened Modi loyalists and workers from his Bharatiya Janata Party. They will stand for hours alongside a neatly manicured 14-mile stretch of road to accord Trump a grand welcome.

Trump generally dislikes foreign travel and prefers being home in his White House bed; in fact, he noted to reporters upon his departure that it was a long trip to India and he was only going to be there one night. But he has a particular affinity for India. He owned a hotel and casino in Atlantic City, N.J., named the Trump Taj Mahal, and he owns multiple properties in India.

"There's a lot of color. This is a loud and boisterous country, and that exactly in some ways really fits with the Trump style," said Tanvi Madan, a senior fellow and director of The India Project at the Brookings Institution. She said Trump is likely to get a king's welcome from a country well-rehearsed in the art of adulation. A half-million people gathered to hear President Dwight D. Eisenhower speak in 1959; President Jimmy Carter had a village named after him -- Carterpuri.

Information for this article was contributed by Jill Colvin and Jonathan Lemire of The Associated Press.