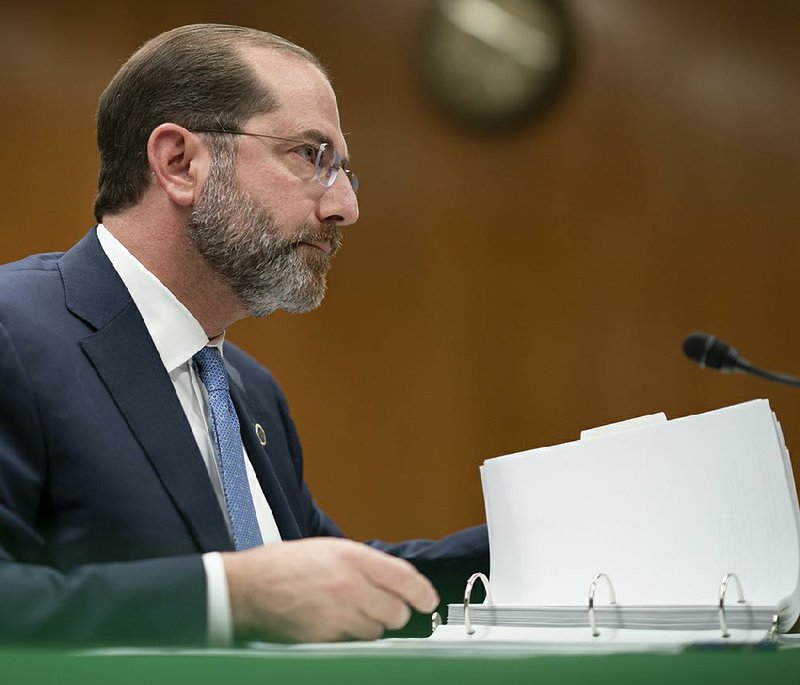 “We cannot hermetically seal off the United States to a virus,” Health and Human Services Secretary Alex Azar told a Senate panel Tuesday. “And we need to be realistic about that.” More pho- tos at arkansasonline.com/226virus/. (AP/J. Scott Applewhite)

Stocks fell sharply again Tuesday on Wall Street, piling on losses a day after the market's biggest drop in two years as fears spread that the growing coronavirus outbreak will put the brakes on the global economy.

Nervous investors snapped up low-risk U.S. government bonds, sending the yield on the 10-year Treasury note to a record low.

The S&P 500 has lost 7.6% in the past four days since hitting a record high last Wednesday. That's the benchmark index's worst such stretch since the end of 2018, resulting in $2.14 trillion in losses, according to S&P Global. Tuesday also marked the first back-to-back 3% losses for the index since the summer of 2015.

The Dow Jones industrial average dropped 879 points, for a two-day loss of 1,911 points.

The latest wave of selling came as more companies, including United Airlines and Mastercard, warned that the coronavirus outbreak will hurt their finances, and more cases were reported in Europe and the Middle East, far outside the epicenter in China.

Americans should begin preparations now, officials at the Centers for Disease Control and Prevention said on Tuesday, because the virus almost certainly will begin spreading in communities in the United States.

In the event of an outbreak, communities should plan for "social distancing measures," like dividing school classes into smaller groups of students, closing schools, canceling meetings and conferences, and arranging for employees to work from home.

Officials at the CDC said they did not know whether spread of the disease to the United States would be mild or severe. But Americans should be ready for a significant disruption to their daily lives, Messonnier said.

"We are asking the American public to prepare for the expectation that this might be bad," she said.

Messonnier reminded people to take proactive steps in washing their hands and cleaning exposed surfaces. She also reiterated that despite fears over coronavirus, the flu still poses a greater risk to the public.

China's battle to contain the epidemic has shown signs of success, with a plunge in the rate of new infections. But this positive trend was overshadowed by the sudden appearance of clusters of infections in Iran, South Korea and Italy.

The emergence of these new hubs underscored the lack of a coordinated global strategy to combat the coronavirus, which has infected nearly 80,000 people in 37 countries, causing at least 2,600 deaths.

"We cannot hermetically seal off the United States to a virus," Alex Azar, the secretary of health and human services, told a Senate panel Tuesday. "And we need to be realistic about that."

At the moment, the United States has just 57 cases, 40 of them connected to the Diamond Princess, the cruise ship overwhelmed by the coronavirus after it docked in Japan. Those patients are in isolation in hospitals, and there are no signs of sustained transmission in American communities yet.

The message from public-health officials contrasts with that of the White House. On Tuesday, National Economic Council Director Larry Kudlow tried to assuage concerns over the coronavirus and its impact on the U.S. economy.

"We have contained this. I won't say [it's] airtight, but it's pretty close to airtight," Kudlow told CNBC's Kelly Evans on The Exchange. He said that, while the outbreak is a "human tragedy," it zlikely will not be an "economic tragedy."

Some senators who attended Tuesday's briefing downplayed any alarmist tone from health officials. However, Sen. Lamar Alexander, R-Tenn., said senators were told the number of cases in the United States would inevitably grow.

Officials have been told that it's inevitable there will be more cases as time goes on, Alexander said. "And what we'll have to try to do is the same thing we've already done through quarantining and monitoring through our public health system to limit that as much as possible."

The worst-case scenario for investors -- where the virus spreads around the world and cripples supply chains and the global economy -- hasn't changed in the past few weeks. But the probability of it happening has risen, said Yung-Yu Ma, chief investment strategist at BMO Wealth Management.

"It's the combination of South Korea, Japan, Italy and even Iran" reporting virus cases, Ma said. "That really woke up the market."

Technology stocks, which rely heavily on China for both sales and supply chains, once again led the decline. Apple dropped 3.4% and chipmaker Nvidia slid 4.1%.

Bond prices continued rising. The yield on the 10-year Treasury note fell as low as 1.31%, a record, according to TradeWeb, before recovering somewhat to 1.35% in the late afternoon. The yield is down from 1.37% late Monday and far below the 1.90% it stood at in early 2020.

There's been speculation that the Federal Reserve might have to cut interest rates in response to any virus-sparked slowdown in economic growth. Richard Clarida, vice chairman of the central bank, said in a speech Tuesday that while the U.S. economy currently "is in a good place" and that "U.S. inflation remains muted," the Fed is "closely monitoring the emergence of the coronavirus."

He said it was "still too soon to even speculate about either the size or the persistence" of a virus-related economic disruption, but "if developments emerge that, in the future, trigger a material reassessment of our outlook, we will respond accordingly."

The lower bond yields, which force interest rates lower on mortgages and other loans, weighed on banks. Shares of JPMorgan Chase slid 4.5% and Bank of America fell 5%.

Real estate companies and utilities also fell, though they held up better than the rest of the market as investors favored safe-play stocks.

Energy companies have been some of the hardest hit on worries that a weakened global economy will burn less fuel. Shares of Exxon Mobil are down 10.2% over the past four days, and the slump has wiped away nearly $26 billion in market value.

But the losses extend far beyond the energy sector. The rapidly spreading virus threatens factories, shipments of parts and customers for businesses around the world. At Apple, which said last week that the virus will force it to fall sort of a previous quarterly revenue forecast, $158.6 billion in market value has vanished in the past four days.

The chief risk is that the stock market was already "priced to perfection," or something close to it, before the virus worries exploded, according to Brian Nick, chief investment strategist at Nuveen.

After getting the benefit of three interest-rate cuts from the Federal Reserve last year and the consummation of a "phase-one" U.S.-China trade deal, investors were willing to pay high prices for stocks on the expectation that profits would grow in the future.

The S&P 500 was recently trading at its most expensive level, relative to its expected earnings per share, since the dot-com bubble was deflating in 2002, according to FactSet.

If profit growth doesn't ramp up this year, that makes a highly priced stock market even more vulnerable.

Information for this article was contributed by Alex Veiga, Stan Choe, Damian J. Troise and Mike Stobbe of The Associated Press, Pam Belluck and Noah Weiland of The New York Times, Colleen Shalby and James F. Peltz of the Los Angeles Times.