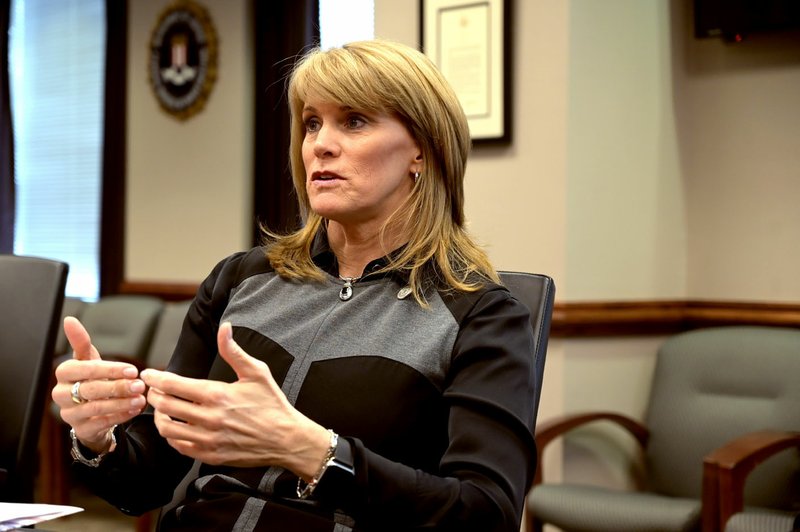 Special Agent in Charge Diane Upchurch speaks with reporters Thursday about the FBI’s efforts to ensure a safe and fair election Tuesday. So far, the FBI has received no word of any threats to election security, she said. (Arkansas Democrat-Gazette/Stephen Swofford)

Federal law enforcement officials tasked with monitoring the security of elections in Arkansas say they are on guard for potential threats -- both online and on the ground -- ahead of next week's Super Tuesday primaries, though they have not received any reports so far of illicit activity.

Diane Upchurch, the special agent in charge of the Little Rock field office of the FBI, said the biggest threat being monitored by the agency is the potential for cyber meddling by foreign governments, including Russia and China.

Such meddling could include the spreading of false information about candidates or the election process itself -- such as the location of polling sites -- or attempts to carry out cyber attacks on campaigns or election officials.

To thwart such attacks, Upchurch said the field office is working with both local and state officials to spread information about best practices in cyber security, as well as how to respond to potential issues.

Upchurch said no political campaigns based in Arkansas have reached out to the FBI with complaints. The agency, she said, has not coordinated so far with either the state Republican or Democratic parties.

The FBI's Washington, D.C., headquarters, she added, has worked closely with its field offices in states that are home to presidential candidates to monitor disinformation activity. However, no Arkansans have mounted major campaigns for the presidency in 2020.

"We're not aware of any threats," Upchurch said in an interview with the Arkansas Democrat-Gazette at the FBI's field office in Little Rock on Thursday.

Neither of the leaders of the two major political parties in the state said they had concerns that had not been addressed.

Doyle Webb, the chairman of the Republican Party of Arkansas, said the party has already upgraded its internal cyber security systems after identifying "several hits" to its previous system in recent years. Webb said the matter was handled internally, without the involvement of federal law enforcement.

The Republican Party, he added, will have a team of lawyers on hand on Election Day to field any incoming concerns.

"It's something we do each election," he said.

The leader of the state's Democratic Party, Michael John Gray, said the party has not identified any issues with its cyber security systems in the past two years.

Gray said election security threats are a matter largely handled by local, state and federal authorities, while the party was mostly concerned that voters are getting to their appropriate polling locations on Election Day.

The FBI recently conducted "tabletop" exercises with officials from the secretary of state's office; divisions of information systems and emergency management; county governments; and the Arkansas National Guard to prepare responses to potential situations that may arise pertaining to elections. Those exercises included running simulations of potential crime scenarios.

The Little Rock field office will also have a "command post" set up to field calls on Super Tuesday and during the Nov. 3 general election.

As it has in past elections, the office has also designated an election crimes coordinator. (The office requested that the identity of the coordinator not be published, because that agent also works on sensitive investigative matters.)

In addition to the efforts of the local field office, FBI officials in Little Rock said, their counterparts in Washington were in touch with social media outlets such as Facebook and Twitter to monitor complaints about potential disinformation.

Upchurch said that anyone with concerns should first reach out to their county election officials to verify the accuracy of information, and then report any suspicious information to law enforcement, as well as the social media companies.

"We really want people to look at things with a really critical eye when they read or see things or hear things on social media," she said.

Information for this article was contributed by William Sanders of the Arkansas Democrat-Gazette.