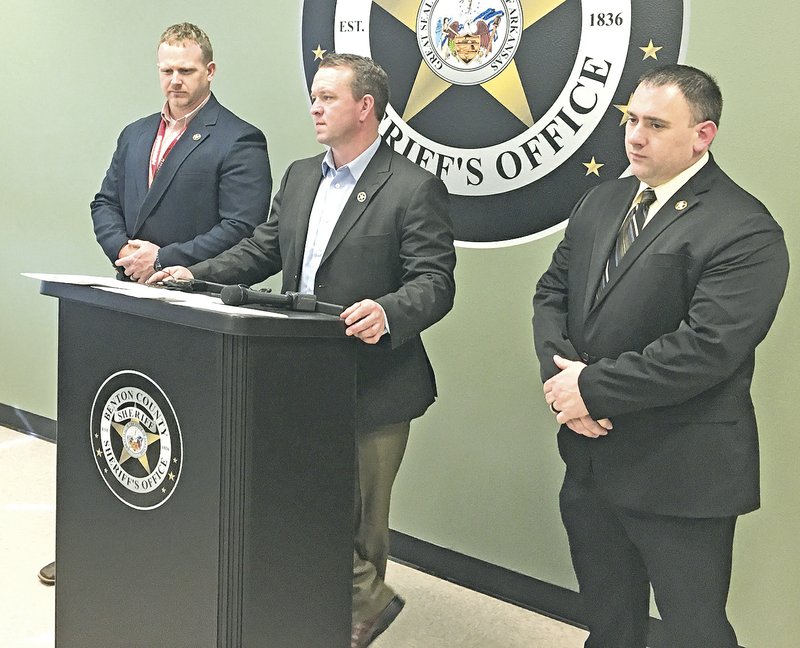 Maj. Kenneth Paul (from left), Sheriff Shawn Holloway and Capt. Thomas See, speak to the media Thursday at the Benton County Sheriff's Office in Bentonville about the arrest of four people in connection with a homicide. (NWA Democrat-Gazette/Mike Jones).

Prosecutors haven't yet filed formal charges, expected to be capital murder, against the four. They are expected to have bail hearings today.

A passer-by reported seeing a body Monday on the side of Van Hollow Road, Holloway said. Authorities believe the body had been there about 12 to 18 hours. The dead man was identified as Lavonte Jackson. Holloway didn't give Jackson's hometown.

Holloway said it's believed Jackson was killed in the Beaver Shores area near the Arkansas 12 bridge, which is 7 or 8 miles from where the body was found.

The sheriff's office didn't yet know how Jackson was killed but there likely was a struggle. Holloway said drugs likely were involved in the crime. Holloway described it as a "hideous crime."

Holloway said there's a possibility of gang involvement and there's no indication of racial motives, Holloway said. Jackson is black and the four suspects are white.

The four were arrested at different times and places during the week, Holloway said. The sheriff's office quickly developed suspects, and Holloway credited the Criminal Investigation Division for digging up clues including information on social media.

The four suspects have given statements to detectives, but Holloway said he wouldn't give details of the interviews.

All four have been in the Benton County jail previously on other criminal charges, Holloway said.

Adair was charged last year with battery and possession of a firearm in another criminal case.

On Nov. 6, police went to North Seventh Street in Rogers after a report of a shooting, according to court documents. Police found Joshua Borchert with a gunshot wound in his foot, according to the affidavit.

Borchert told police Adair had pulled a gun and shot him and then left, according to the affidavit. Adair was free on $35,000 bond.