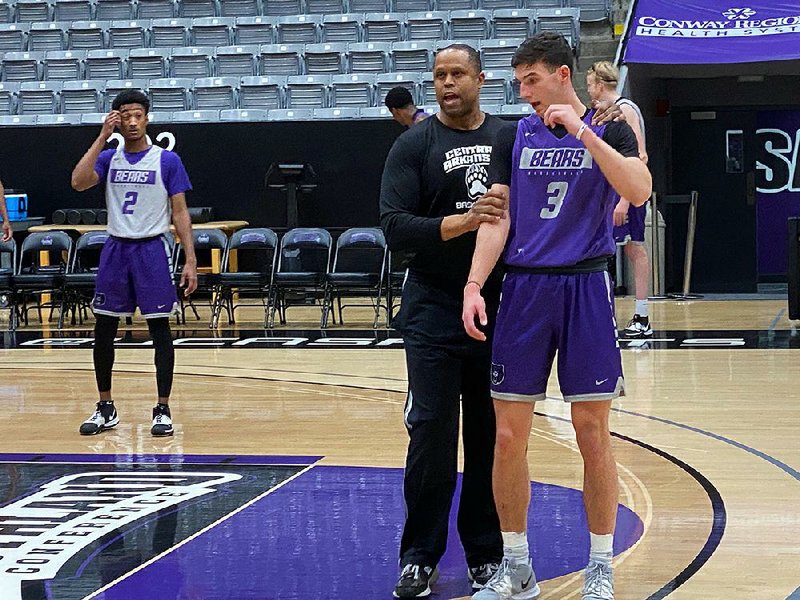 UCA interim men’s basketball Coach Anthony Boone said he has enjoyed the challenge of leading the team and that he has received support from both the players and the other coaches on staff.

CONWAY -- Anthony Boone admitted that the past few weeks haven't been easy. He's been thrust into a role he didn't anticipate being in, having to lead a team forward in the place of one of his mentors.

Boone is the University of Central Arkansas men's basketball team's interim coach while Coach Russ Pennell is away on an indefinite leave of absence. The school announced Dec. 16 that Pennell was taking time away, and it's unclear when the sixth-year UCA head coach will return.

"It's been a challenge, but it's been good. The guys have been great, and the staff has been great," Boone said Friday. "Coach Pennell always said that it's always different when you're leading the program as to being one of the assistants, and it's hard to see that until you actually step into that. I understand what he always was talking about there."

Boone has been around Pennell longer than most. He played at Ole Miss in the 1990s, while Pennell served as an assistant coach. He's worked under Pennell at multiple coaching stops spanning 11 seasons, including all six at UCA as the associate head coach.

But even Boone said Friday he didn't know what took Pennell away.

Boone said Pennell fell ill right before the team was set to fly to California for its game against Pepperdine on Dec. 14. Two days later, Pennell informed the team he'd be taking a leave of absence. Boone said Pennell didn't share the reason why he was leaving, and he doesn't know when he'll be back, but Boone didn't want to label the reason as health-related.

For now, it's Boone's show, and the Bears (3-11, 2-1 Southland Conference) are moving forward, unsure of when their head coach will return. Pennell, though, has still kept in contact with his team while away.

"He texts us. He's always encouraging us to keep doing a good job and to keep the guys going," Boone said.

Boone said he believes the Bears have grown tighter since Pennell began his absence. But it's still been a period of adjustment, primarily for Boone.

The quiet-natured assistant isn't known as a rah-rah type of coach. Stepping into the interim role has required a more vocal presence in front of the team.

Like when UCA trailed 40-29 at halftime against Texas A&M-Corpus Christi on Dec. 21 in Conway. That's when junior center Hayden Koval said Boone did something he's never seen from him before.

"We knew why we weren't playing well, and he came in there and he was talking to us, and then all of a sudden, he pounded our ice chest in the locker room," Koval said. "That kind of made us stand at attention because we were like, 'Whoa, we've never seen that before.' He started yelling, and we were all fired up."

That Bears responded with a 71-67 victory for their second win in a row.

Since then, UCA has dropped two more games, including a 111-107 overtime loss at Houston Baptist on Thursday night. UCA is 2-3 with Boone as the interim. The Bears host McNeese State (5-8, 0-2) at 3 p.m. today at the Farris Center.

UCA, which has taken plenty of lumps through its first 14 games and played a daunting nonconference schedule, received a boost Thursday when junior point guard DeAndre Jones returned from an eight-game absence due to a high-ankle sprain and scored 21 points, while tallying 6 assists and 6 rebounds, in 29 minutes off the bench.

Pennell has said that he knew his team would likely have it rough early in the season, and that's proven to be the case so far with a 3-11 record.

For the Bears, it simply comes down to the conference schedule and the Southland Conference Tournament in March, as winning that ensures an NCAA Tournament bid, regardless of record.

"We still have a job to do," Boone said, "and we're gonna try to be the best team we can the rest of this season."