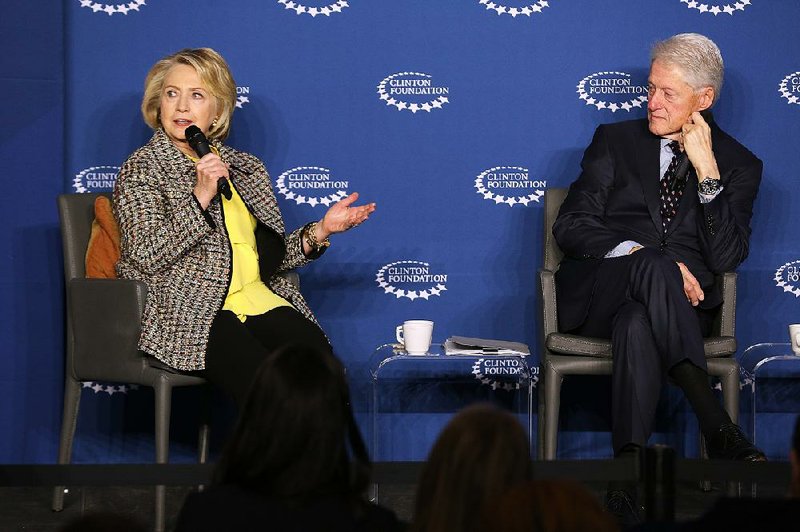 FILE — Former Secretary of State Hillary Rodham Clinton speaks in this Wednesday, Nov. 20, 2019 file photo, as she and her husband, former President Bill Clinton, participate in a panel discussion at the Economic Inclusion and Growth: The Way Forward conference in Little Rock.

Nearly two decades after moving to New York, former President Bill Clinton and former Secretary of State Hillary Clinton continue to donate their own funds to a variety of causes that benefit Arkansans, tax filings show.

The list of nonprofits aided by the Clinton Family Foundation in 2018, the latest year for which information was available, includes at least 10 with deep Arkansas roots.

Overall for the year, the foundation gave away nearly $1.97 million nationwide to four dozen nonprofit groups.

The private family foundation -- which is separate from the Bill, Hillary and Chelsea Clinton Foundation -- accepted no private donations and paid no salaries.

Bill and Hillary Clinton were its sole donors, contributing $1.1 million in 2018.

The foundation is based in Chappaqua, N.Y., where the family has its primary residence. The former Arkansas governor serves as its president, his wife is its secretary-treasurer, and their daughter is the director.

The giving reflected in the IRS 990-PF form is not atypical, according to Angel Urena, the former president's spokesman.

"The Clintons feel incredibly fortunate to have had the opportunities they've had, and they're grateful they can give back, help others, and support worthy causes close to their hearts," Urena said in a written statement. "For decades, they have given ten percent of their income to charitable causes. It's a huge part of who they are and what they believe in, and they look forward to continuing their giving for years to come."

The family foundation's biggest gift -- $800,000 -- went to the Bill, Hillary and Chelsea Clinton Foundation, which has offices in New York City and Little Rock.

Nine other Arkansas-based groups received a total of nearly $250,000. Among them:

• The Thea Foundation in North Little Rock received $100,000. The organization, which promotes arts education and has awarded more than $2.3 million in scholarships, honors the memory of Thea Kay Leopoulos, who died in a car accident at age 17.

Leopoulos' father, Paul, has been friends with Bill Clinton since grade school; the former president cut short a trip to Scotland and returned to Arkansas upon receiving the news. Since Thea Kay Leopoulos' death in 2001, Clinton has been one of the organization's biggest benefactors, serving for years on its board of directors and helping it raise money.

• Thrive Inc., a nonprofit design and economic development firm based in Helena-West Helena, was given $50,000. Thrive is led by Will Staley, whose mother, Carolyn Staley, grew up next door to Bill Clinton in Hot Springs.

• The Central Arkansas Library System Foundation in Little Rock received $40,500. The system's Butler Center for Arkansas Studies houses material from Clinton's time as governor and is also home to the Bill Clinton Gubernatorial Audio Project, which has preserved and digitized more than 3,000 recordings from that era.

The donation "helped us pay a person to get those papers ready so they could be used by the public," said Glenn Whaley, manager of the system's Bobby L. Roberts Library of Arkansas History and Art. "Anybody that wants to come in and use them can."

Hillary Clinton helped bring the HIPPY program to Arkansas decades ago and is a longtime supporter.

Alzheimer's Arkansas in Little Rock was given $1,000.

The Clintons have also been generous with their neighbors in Westchester County, N.Y. Recipients include the Chappaqua Volunteer Ambulance Corps ($5,000); Chappaqua Summer Scholarship Program ($5,000); and Lagond Music School in Elmsford ($2,500). The United Methodist Church and Neighbors Link Corp., both in Mount Kisco, received $10,000 each, while the Westchester Land Trust in Bedford Hills was given $5,000.

Georgetown University, the former president's alma mater, got $50,000. Yale University, where the Clintons studied law, received $100,000. Another $10,000 went to Sidwell Friends School in Washington, D.C., which counts Chelsea Clinton among its graduates.

A gift of $100,000 went to George Washington University in Washington. The Rodham Institute, at the university's School of Medicine and Health Sciences, is named after the former secretary of state's mother, Dorothy Rodham.

The Scranton Area Community Foundation was given $20,000. Hillary Clinton's father grew up in the northeast Pennsylvania community, and her family returned to the area every summer.

Other major beneficiaries included the Washington-based Endowment of the United States Institute of Peace ($100,000) and the Stamford, Conn.-based American University in Kosovo Foundation ($30,000).

The former president helped end years of bloodshed in the former Yugoslavia. He traveled to Pristina, Kosovo's capital, last year to mark two decades of peace and democracy there. 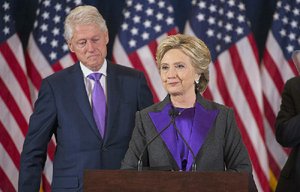 Former President Bill Clinton and former Secretary of State Hillary Clinton were the sole donors in 2018 to their family foundation, which accepted no private donations. (New York Times file photo)