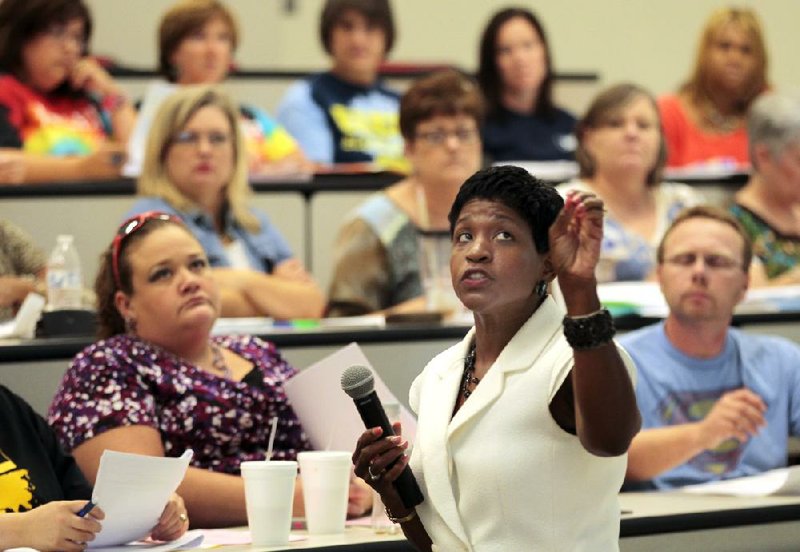 A recent three-year drop in the number of people enrolled in Arkansas teacher preparation programs appears to have bottomed out, and the number is on the upswing, preliminary data from the Arkansas Division of Elementary and Secondary Education show.

The number of enrollees in the state's teacher preparation programs for 2018-19 was 4,443.

The teacher preparation enrollment data will be included in the state's next annual Educator Preparation Program Report that is released by the state agency in early summer.

"Kindergarten through 12th-grade education is the single largest employer in Arkansas with more than 71,000 employees, when you look at certified and classified staff," Pfeffer said.

"As far as the workforce, it is larger than state government and any industry. You think about the impact that the education workforce has in terms of our state, that's why it is really exciting to be able to start seeing the data moving back to the direction of increasing. We hit the bottom in terms of those enrollments. I think there is a renewed interest, a renewed excitement and a renewed importance on teaching as a profession."

The 2018-19 annual teacher preparation program totals include participants in traditional educator preparation programs -- college and university-degree programs -- and alternative routes to teaching credentials. That includes the Arkansas Professional Pathway to Educator Licensure, or APPEL, that enables a person who has a degree in a field other than education to work as a teacher while meeting requirements to obtain a standard state teaching license.

The enrollment in nontraditional teacher licensure programs is actually showing the steeper and more consistent gains, with 1,860 enrollees in 2018-19, up from 1,425 just the year before.

Efforts to expand the pool of people preparing to teach include promoting teaching as a profession to middle and high school students through Orientation to Teaching courses or a Teacher Cadet program, Pfeffer said.

As many as 1,800 students in some 100 of the state's 300 high schools are currently in such programs, said Sharlee Crowson, a program adviser in the state agency's teacher recruitment and retention unit.

Crowson and other state education leaders want to see those numbers grow and programs expanded to the point that students graduate from high school with credentials that qualify them to be paraprofessionals or teacher assistants, which could be a source of income and experience as they go through a college degree program to be a teacher.

In addition to building up the pool of people in teacher preparation programs, the state has worked to improve the retention of its teacher force, which already exceeds national averages. For example, Arkansas has a 92% retention rate after one year of work in the classroom, 75% after five years and about 56% after 10 years, Pfeffer said.

Retention efforts include expanding experienced educators' mentoring of new teachers through the state's 15 education service cooperatives. Each of the cooperatives also employs a teacher recruitment and retention specialist who provides guidance on licensure and employment issues, and on high school programming, to cooperatives' member districts.

Another effort is Gov. Asa Hutchinson's and the General Assembly's legislation to increase the minimum starting salaries for bachelor- and master-degreed teachers. The starting salary for a beginning teacher must be at least $36,000 by 2022-23, as a result of the new law.

Also, the state has recently modified its licensure system to include "lead" teacher and "master" teacher certifications for those who have at least three years of teaching experience and want to do more while still teaching.

"We kept hearing, over and over, that teachers wanted to find ways to lead from the classroom without leaving the classroom," said Joan Luneau, program coordinator in the state's educator preparation unit. "This is a way they can provide leadership without giving up the classroom."

Districts are still exploring ways to provide compensation to those lead and master teachers, Pfeffer said. State education leaders are planning in the coming weeks to roll out some options and pilot programs to support efforts by districts to alter the traditional teacher salary schedules that are built around teacher education levels and years of teaching experience.

Also in regard to licensure, the state pays for the test fees for teachers who agree to add to their licenses a certification to teach a subject in which there is a shortage of teachers. Teacher shortage areas, announced every year, have typically been special education, math and science, among others. One of those -- library/media -- has recently been removed from the list as the result of awarding "ancillary" state licenses. Those licenses qualify people to work in schools if they have master's degrees in the fields but do not have education degrees.

Still other efforts by state education leaders to meet goals to recruit teachers and encourage longevity include a recently completed Teach Arkansas lecture series directed at teachers around the state, and a campaign to appeal to people to return to work if they have left teaching or otherwise allowed their licenses to expire.

The state-set goals include:

• Increase the number of beginning teachers in Arkansas public schools by 10% in five years.

• Decrease the Arkansas teacher attrition rate by 15% in five years.

• Increase the number of teachers reentering the teaching profession in Arkansas by 5% in five years.

• Increase the number of minority-group teachers in public schools by 25% in five years.

"To realize our goal of having equitable access -- where every student has an effective teacher every day -- we have to create that talent pipeline," she said. "That takes in recruiting to the profession, getting them through high-quality programs, providing support as they enter the profession and giving them opportunities that make them want to stay."