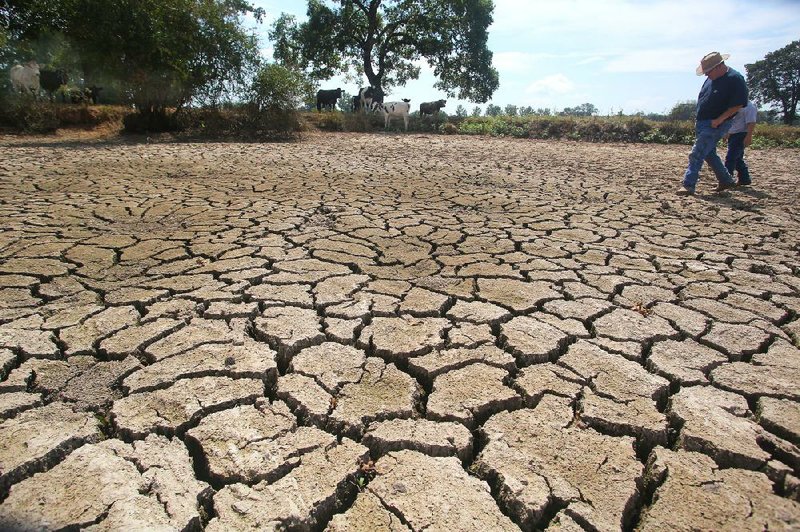 Kevin Hicks and his son Cody, 8, walk on one of their dried-up ponds on their farm in Lonoke County in this August 2012 file photo. Hicks said it was the first year that this pond had gone dry.

FAYETTEVILLE -- A report on climate-related science at public universities in the U.S. found that emerging topics include the effects of drought and extreme heat.

The report by the National Council for Science and the Environment used statistical methods to examine the research output of 80 public universities in the U.S., including the University of Arkansas, Fayetteville.

In total, the report identified 10,004 papers with a focus on climate-related science published from 2014-18 by researchers at the 80 schools, which included at least one university from every state, the District of Columbia and three U.S. territories.

Researchers with the nonprofit, nonpartisan organization identified 51 climate-related papers from UA researchers during the five-year period under study. No other Arkansas university was included in the study.

"It shows our universities across the nation are fully engaged in this. It's not something that's a sideline for a few people," Marty Matlock, executive director of the UA Resiliency Center, said of the report.

The council's report, published in November, lists as a key finding that "climate science research increasingly focuses on impacts."

The methodology of the report involved examining words used in research publications in scientific journals. The keyword analysis revealed "emerging topics that underscore emphasis on climate impacts such as drought and extreme heat, with a growing focus on adaptation strategies and resilience," the report states.

[HEALTH & SCIENCE: Get a weekly review of the top headlines in this email newsletter from reporter Emily Walkenhorst » arkansasonline.com/emails/science]

The UA Resiliency Center, established in 2018, focuses on food, water and community, Matlock said. The center looks at how to improve resiliency to "stressors" such as a changing climate, Matlock said. Goals are to "improve human conditions here in Arkansas, as well as around the world," Matlock said.

"Climate change represents one of the major existential threats to humanity over the next 50 years, and it's a human-dominated, human-driven process," Matlock said.

Research "tells us what we can expect, what's coming next," said Matlock, an ecological engineering professor. "That helps us with risk management, and it can also tell us what we can do to mitigate those risks."

Matlock last year was elected chair of the national council's College and University Network Leaders' Alliance Executive Committee, and will also serve as a member of the organization's board of directors. A meeting for the council in June took place on the UA campus and was hosted by the UA Resiliency Center.

In describing climate-related research at UA, Matlock referred to work that's aimed at reducing greenhouse gas emissions in agriculture, including a collaborative effort that involves Greg Thoma, a chemical engineering professor. But that's just one of several research projects, he said, with climate-related research involving "just about every discipline of our campus."

The report is believed to be the only one of its kind in the U.S. to take a broad survey of the amount of climate research at public institutions, said Michelle Wyman, executive director of the National Council for Science and the Environment.

Along with highlighting topics of study, the report aims to show "decision-makers at all levels of government" how every state produces climate science research, Wyman said.

"Scientists in these universities are studying locally relevant topics, and that represents untapped potential for decision-makers at the state, regional and local levels, to be utilizing evidence-based research out of their public institutions more than they currently are," Wyman said.

For the southeast region, the report states that the "impacts of climate change" are "becoming most visible through the increase in flooding, temporal and geographic shifts that affect human health, and growing risks of wildfires."

The report does not name any Arkansas researcher or publication, but does note some details about climate-related research coming out of the state. The most common keywords were "climate change" and "precipitation." Keywords identified as "local" to Arkansas -- and so possibly indicative of "a topic of local-scale significance" -- include: mountains, tree rings and thermal habitat.

Stahle, in an email, said he's worked extensively in the southeast to study "climate variability and change." He said his work has included the study of droughts in the early Colonial period of the U.S. that affected early English settlements, where settlers struggled to survive.

"Turns out that modern industrial society is also vulnerable to climate variability and change due to heavy consumption of surface and groundwater supplies, agricultural production, and sea level rise," Stahle said in an email.

Among other work by UA researchers, Matlock cited anthropologist Peter Ungar, who's studying how people and mammals in Russian Siberia are adapting to a changing climate. Ungar's work is part of a National Science Foundation-funded project involving researchers at several universities.

"We really don't know what the patterns are motivated by, based on this initial report," Wyman said, cautioning against making comparisons. She said one of the main takeaways from the report is that "climate science research is taking place at these institutions at a pretty solid pace."

Wyman said the council will look at more institutions in its next report.

Matlock, who said he's in his 19th year at UA, said that if a future report looks at research output over the next five years, he'd expect the number of climate-related science publications from UA to increase "by a factor of 10 or more."

Matlock said there's a "lag time" from when projects are undertaken and results are published, and that he's "seen our institution organize itself with deep focus around these issues." UA last January announced three signature research areas, one of which is "Innovating a Resilient and Sustainable Future."

"Some of that work is just now coming to fruition. It takes a long time to do good science," Matlock said. 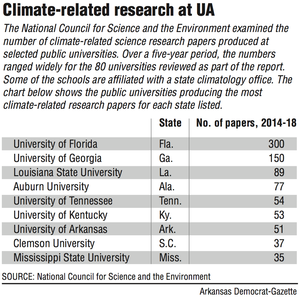