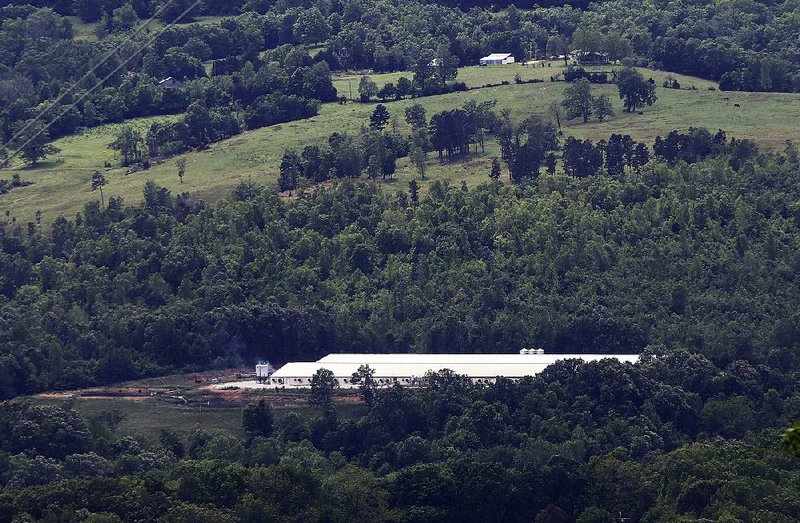 FILE — The C&H Hog Farms complex, shown in 2017, was located on Big Creek 6.6 miles from where the creek flows into the Buffalo River.

Arkansas has paid the owners of C&H Hog Farms $6.2 million for their former farmland in the Buffalo River watershed, and the state now possesses the land in the form of a conservation easement.

Completion of the agreement between the state and the farm's owners was announced Monday in a news release from the Arkansas Department of Parks, Heritage and Tourism.

No plans have been announced for the land, but its transfer to the state as a conservation easement -- which limits its potential uses -- is the beginning of a new chapter for the river's watershed.

The watershed received renewed attention and protection efforts as a result of the farm's opening in 2013. But the farm's nearly completed closure -- the state is responsible for the closure of two manure holding ponds on the property -- won't spell the end of efforts to help protect the country's first "national" river.

"I appreciate the willingness of the farmers to work with us on this, and now look forward to the work that the state will be doing to ensure that the Buffalo National River continues to be the treasure that it is," Gov. Asa Hutchinson said in the news release from the Department of Parks, Heritage and Tourism, which will manage the easement.

"It's been a long road to get to this point but has been worth the effort as a step to ensure the vitality of the Buffalo National River now and into the future," department Secretary Stacy Hurst said in the release.

The conservation easement signals the near end of the farm, but the debate over whether it was hurting the environment is still unsettled.

"I'm glad that we've reached this milestone, and hopefully we can get the closure plan finalized in a not-too-long period of time and we can put this thing to bed," said Gordon Watkins, president of the Buffalo River Watershed Alliance.

The farm's land sits on Big Creek, about 6.6 miles from where it flows into the Buffalo River. For the past several years, people from Arkansas and from across the nation have expressed concern about the possibility of manure -- applied as fertilizer -- running off the property and into the water, or about the possibility of a major storm event overfilling the ponds that hold thousands of gallons of hog manure.

Research paid for by the state, conducted by the University of Arkansas System Division of Agriculture, has not concluded that C&H negatively affected water quality in Big Creek or the Buffalo River.

In recent years, the Buffalo River has struggled with algal blooms along tens of miles of its middle section and high E. coli levels near the Big Creek intersection.

Because algae-causing nutrients can build up and embed in soil years before leaching into water, groups like the Buffalo River Watershed Alliance have asked that the state or federal government continue robust monitoring on Big Creek and the Buffalo River. The state has monitors on both, but the study sampled from more locations on a more frequent basis.

The buyout agreement stipulated the payment, the easement and the dismissal of each lawsuit C&H had brought against the state. The lawsuits were mostly related to recent denials of C&H's operating permit applications, although one concerned an alleged violation of the Arkansas Freedom of Information Act by state environmental regulators after records sought by the farmers were not procured within three days of the farmers' request.

That announcement was followed by the Arkansas Pollution Control and Ecology Commission's decision to permanently ban any federally classified medium or large hog farms in the watershed. That decision is pending public comments and eventually legislative review, and some commenters have contended that the ban has potential loopholes that would allow a facility similar to C&H to open there.

Operations have ceased at the premises, and all that is left to do to close the facility is emptying the manure ponds. The Arkansas Division of Environmental Quality will be responsible for that part but is reviewing public comments on its proposed method.

Work to improve the Buffalo River's present and future remains.

"We're not going away," Watkins said.

The Buffalo River Watershed Alliance formed in 2013 specifically to oppose the farm's presence within the watershed and so close to the river and a major tributary of it.

Even without considering C&H's potential effect, the river suffers from too many nutrients loading into the water from long-ago agricultural practices and current wastewater treatment plant failures, Watkins said.

He said he wants to promote best practices in agriculture that would reduce the amount of phosphorus or nitrogen applied to land, which can leach into water. Those elements are nutrients, which in higher amounts can result in oxygen deficiencies and algae growth.

Wastewater plants in Jasper, Marble Falls and Marshall need help and funding to properly function, Watkins said. In those areas, not enough people are in the wastewater systems to pay to maintain them, he said.

Watkins said he would like to see those towns get the assistance they need, possibly with the state's Buffalo River Conservation Committee helping to leverage federal funds.