Trojans finish off close one 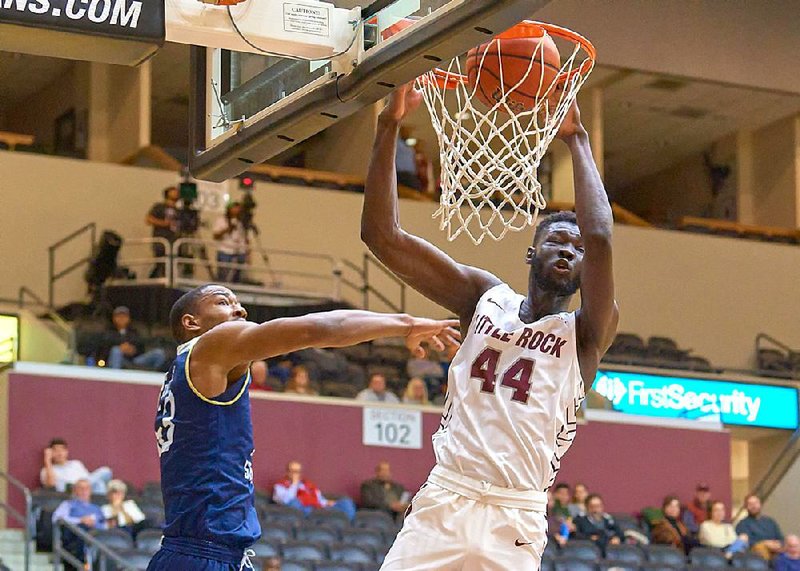 Rout Monyyong led UALR with 19 points and 16 rebounds in a 79-73 victory over Georgia Southern on Monday night at the Jack Stephens Center in Little Rock.

With a sixth consecutive victory hanging in the balance, the only thing that the University of Arkansas at Little Rock's Markquis Nowell and Kamani Johnson could do was watch from the sideline.

Nowell and Johnson, two of the Trojans' top players, were each relegated to the bench in the closing minutes Monday night at the Jack Stephens Center in Little Rock. Johnson -- who was named the Sun Belt co-player of the week earlier in the day for last week's back-to-back double-doubles -- fouled out with 4:14 to play.

Nowell, the Sun Belt's leading scorer, was then forced to exit the floor with 2:14 remaining, after suffering an apparent leg injury, as the Trojans held a 69-65 lead following a jumper by junior guard Ben Coupet Jr. But the Trojans -- a team already playing without three starting-caliber players in sophomore forward Nikola Maric, junior forward Kris Bankston and junior guard Alsean Evans -- didn't fold.

UALR knocked down 10 of 13 from the free-throw line over the final minute and a half to slip past Georgia Southern 79-73 in front of an announced crowd of 1,188. 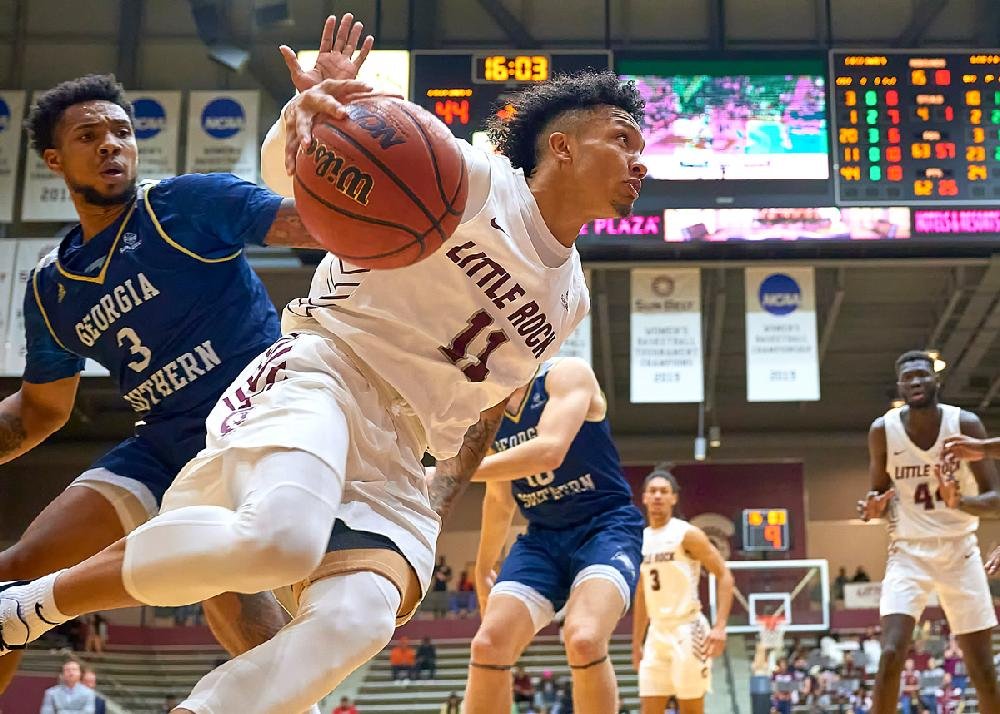 Jaizec Lottie finished with 14 points and six assists for the UALR Trojans in their 79-73 victory over Georgia State on Monday night in Little Rock.

The Trojans (11-5, 5-0 Sun Belt) remain alone in first in the conference standings and have won six games in a row, which is tied for their longest win streak since 2016-17.

The program hasn't had a winning season the last three years, and it was picked to finish 11th of 12 in the league's preseason coaches poll. But UALR has responded with a 5-0 Sun Belt mark, tying the program's best start ever to conference play.

The only other time that happened, current Texas Tech Coach Chris Beard was leading the Trojans. That was the 2015-16 season.

"I've always thought this program had a chance to really do some special things here," Walker said. "You just got to win some basketball games. We're just gonna keep banging away."

Junior forward Ruot Monyyong was once against dominant for the Trojans, logging his fourth consecutive double-double with 19 points and 16 rebounds.

Nowell finished with seven points for the third time in his last four games, while Johnson tallied 11. After the game, Walker didn't seem overly concerned with Nowell's injury.

"I hope it's nothing bad," Walker said. "[Our trainer] hasn't come to me, so I think everything is good."

Coupet finished with 13 points and 8 boards, and the Trojans received valuable minutes from junior guard Jaizec Lottie and freshman guard Isaiah Palermo. Lottie finished with 14 points and 6 assists in 34 minutes, and Palermo had 8 points and 4 rebounds in 17 minutes.

The Trojans raced to a 24-10 lead midway through the first half before Georgia Southern started to chip away.

UALR's lead was down to 38-37 with 1:23 left once guard David-Lee Jones Jr. hit a three. Monyyong answered with back-to-back buckets in the final minute, while Johnson was also hit with a technical foul for shoving a Georgia Southern player, as the Trojans carried a 42-37 lead into the half.

But Georgia Southern never went away in the second half, and the Eagles took a brief 43-42 lead in the opening 2:15 thanks to a 6-0 run to start. Minutes later, the Trojans had regained control with a 52-45 lead and 13:51 remaining, and they ended up leading the final 16:38 of the game.

Moments after Johnson fouled out with 4:14 left, Georgia Southern forward Isaiah Crawley rocked the Stephens Center with a jarring two-handed slam, cutting UALR's lead down to 67-65. But the Trojans answered with a 5-0 run to take a 72-65 lead with 1:23 left, and from there it became a battle at the foul line.

A team that's showed lately it's learned how to close did so again.

"I think it's all about maturity. We're a lot more mature this year," Lottie said. "We were in these situations last year, and we gave up the games. I think we learned from those, and we take care of these opportunities that we have now."