Canada’s Trudeau: Downing may have been unintentional by Compiled by Democrat-Gazette staff from wire reports | January 10, 2020 at 6:58 a.m. 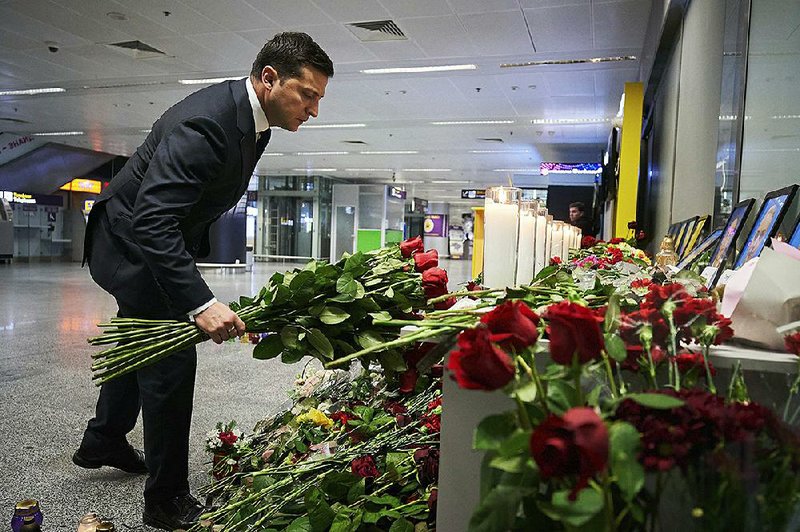 Ukrainian President Volodymyr Zelenskiy places flowers at a memorial for crash victims Thursday at the airport outside Kyiv, Ukraine. “Undoubtedly, the priority for Ukraine is to identify the causes of the plane crash,” Zelenskiy said. “We will surely find out the truth.” More photos at arkansasonline.com/110ukraine/.

TORONTO -- Canadian Prime Minister Justin Trudeau said Thursday that evidence indicates an Iranian missile downed a Ukrainian jetliner late Tuesday and that the strike "may have been unintentional."

Trudeau, whose country lost at least 63 citizens in the downing, said in Toronto, "We have intelligence from multiple sources including our allies and our own intelligence. The evidence indicates that the plane was shot down by an Iranian surface-to-air missile."

He added, "This may well have been unintentional."

The crash ranked among the worst losses of life for Canadians in an aviation disaster. The flag over Parliament in Ottawa was lowered to half-staff.

Earlier, U.S. officials said it was "highly likely" that an Iranian anti-aircraft missile downed the jetliner, killing all 176 people on board. They suggested it could well have been a mistake.

The crash came just a few hours after Iran launched a ballistic-missile attack against Iraqi military bases housing U.S. troops in its confrontation with Washington over the U.S. drone strike that killed an Iranian Revolutionary Guard general. The airliner could have been mistaken for a threat, said four U.S. officials, speaking on condition of anonymity to discuss sensitive intelligence.

Asked by reporters if he thought the U.S. strike that killed the general is to blame, Trudeau said, "I think it is too soon to be drawing conclusions or assigning blame or responsibility in whatever proportions."

[Video not showing up above? Click here to watch » https://www.youtube.com/watch?v=u6WcKlhes2Q]

U.K. Prime Minister Boris Johnson said, "There is now a body of information that the flight was shot down by an Iranian surface-to-air missile."

The assessment that 176 people were killed as collateral damage in the Iranian-U.S. conflict cast a new pall over what had at first appeared to be a relatively calm aftermath after the operation that killed Iranian Gen. Qassem Soleimani.

It was not immediately clear how the U.S. and its allies would react. Despite efforts by Washington and Tehran to step back from the brink of possible war, the region remained on edge. U.S. troops were on high alert.

At the White House, President Donald Trump suggested he believed Iran was responsible for the shoot-down and dismissed Iran's initial claim that it was a mechanical issue with the plane.

"Somebody could have made a mistake on the other side." Trump said, noting the plane was flying in a "pretty rough neighborhood."

U.S. officials wouldn't say what intelligence they had that pointed to an Iranian missile. But they acknowledged the existence of satellites and other sensors in the region, as well as the likelihood of communication interceptions and other similar intelligence.

The Washington Post obtained a video that allegedly shows the moment the airliner is struck in midair. The video, first published by The New York Times, purportedly shows a missile intercepting the aircraft, followed by a loud boom.

Flight tracking data from Flightradar24 showed the Ukrainian airliner taking off from Tehran's Imam Khomeini International Airport in a northwesterly direction before losing contact near the suburb of Parand.

Michael Elleman, director of the Non-proliferation and Nuclear Policy Program at the International Institute for Strategic Studies, said the general area about 12 miles northwest of Tehran's airport is known to be filled with Iranian missile facilities, which could have been protected by anti-aircraft systems. The Iranian government may have suspected the missile sites could be targets for a retaliation by the United States.

A preliminary Iranian investigative report released Thursday said that the airliner pilots never made a radio call for help and that the aircraft was trying to turn back for the airport when the burning plane went down.

The Iranian report suggested that a sudden emergency struck the aircraft.

Investigators from Iran's Civil Aviation Organization offered no immediate explanation for the disaster, however. Iranian officials initially blamed a technical malfunction for the crash, something backed by Ukrainian officials before they said they wouldn't speculate during an ongoing investigation.

Eyewitnesses, including the crew of another flight passing above, described seeing the plane engulfed in flames before crashing at 6:18 a.m., the report said. The crash caused a huge explosion when the plane hit the ground, likely because the aircraft had been fully loaded with fuel for the flight to Kyiv, Ukraine.

The report also confirmed that both of the so-called black boxes that contain data and cockpit communications from the plane had been recovered, though they sustained damage and some parts of their memory was lost.

Hours before the plane crash, the U.S. Federal Aviation Administration had issued an emergency flight restriction barring U.S. carriers and pilots from flying over areas of Iraqi, Iranian and some Persian Gulf airspace, warning of the "potential for miscalculation or misidentification" for civilian aircraft because of heightened political and military tensions.

A team of 45 experts and search-and-rescue personnel from Ukraine arrived in Tehran early Thursday to participate in the probe, as well as to identify and repatriate the bodies of the 11 Ukrainians aboard, including the nine crew members.

Before the U.S. and Canadian statements, Ukrainian investigators had said they were also looking at a range of theories -- including the possibility of anti-aircraft fire.

Oleksiy Danilov, secretary of Ukraine's National Security and Defense Council, wrote on Facebook that his team wants to search for possible debris of the Tor air-defense missile, after seeing online reports about the discovery of possible fragments of one near the crash site.

Ukraine has a grim history with missile attacks, including in July 2014 when one such strike downed a Malaysian Airlines flight over eastern Ukraine, killing all 298 people aboard.

Ukrainian President Volodymyr Zelenskiy said, "Undoubtedly, the priority for Ukraine is to identify the causes of the plane crash. We will surely find out the truth."

The U.S. accident investigator, the National Transportation Safety Board, is talking to the State Department and the Treasury Department about traveling to Iran to inspect the U.S.-built aircraft and working with Iranian authorities despite U.S. economic sanctions against that country. Federal officials are concerned about sending employees to Iran because of the heightened tensions. 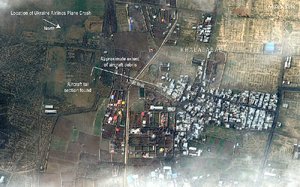 Photo by AP/©2020 Maxar Technologies
This annotated satellite image shows the debris track of the Ukrainian jetliner that crashed late Tuesday outside Tehran. U.S. officials wouldn’t say what intelligence they had that pointed to an Iranian missile as the cause of the crash, but they acknowledged the existence of satellites and other sensors, and the likelihood of intercepted communications and intelligence. 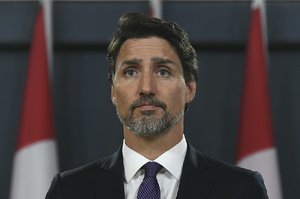 Photo by AP/The Canadian Press/Adrian Wyld
Canadian Prime Minister Justin Trudeau holds a news conference Thursday in Ottawa about the Ukrainian jetliner crash in Iran that killed at least 63 Canadians. He cited “multiple” intelligence sources indicating that the plane was shot down, but added that it “may well have been unintentional.” More photos at arkansasonline.com/110canada/.