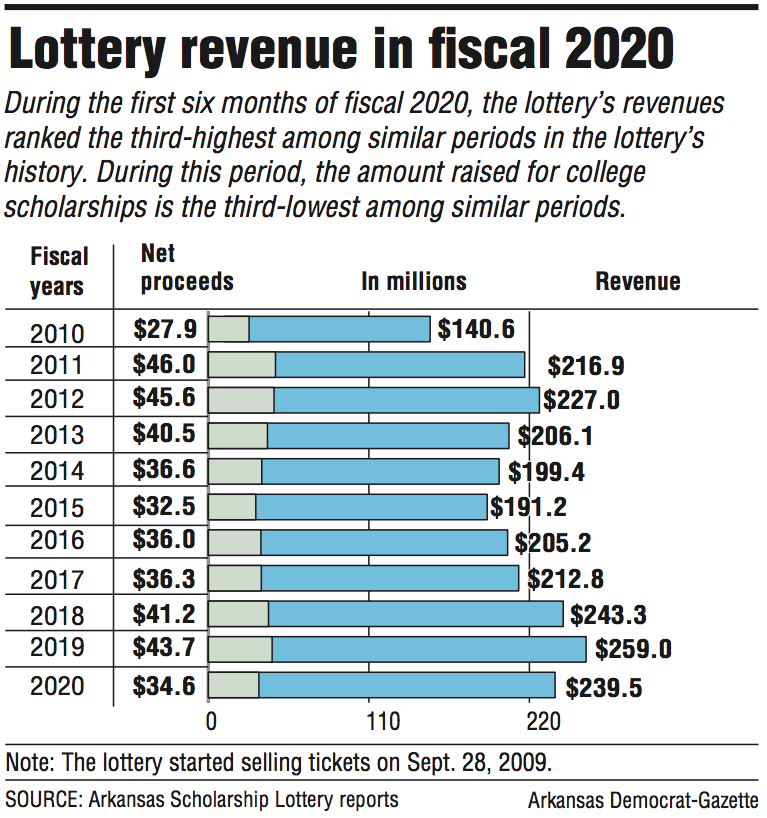 The Arkansas Scholarship Lottery's total revenue in December inched up by about $275,000 from the same month a year ago to $46.1 million, while the amount raised for college scholarships dipped by about $280,000 to $6.3 million.

Scratch-off ticket revenue increased last month by about $780,000 over the same month a year ago to $38.8 million, while its draw-game ticket revenue slipped by about $570,000 to $7.1 million, the lottery reported in its latest monthly report to Gov. Asa Hutchinson and the Legislative Council's lottery oversight subcommittee. Last month's revenue also included about $125,000 from other sources, up from $60,000 a year ago.

"We just had our all-time best December for overall sales and instant ticket sales in the history for the lottery," lottery Director Bishop Woosley said Monday. "As of right now, we are on pace for another record year in instant ticket sales." Instant tickets also are called scratch-off tickets.

"The only drawback we're having at this point is a drop in our draw game sales due to a lack of large jackpots," Woosley said Monday in a written statement.

He said it's difficult to pinpoint why net proceeds for college scholarships dipped in December from a year ago.

"It could've simply been that we had a couple of bad weather days during the month that affected our players getting out and purchasing tickets," he said. "The sluggish draw game sales likely had an impact as well, as those games generally have a higher return for the lottery."

Some members of the Legislative Council's lottery oversight subcommittee signaled last month that they want to hear from consultant Camelot Global Services about whether the firm has any ideas to improve the state lottery's performance. A subcommittee co-chairwoman, Sen. Joyce Elliott, D-Little Rock, said the consultant will appear before the subcommittee during its meeting in February.

The total amount of those scholarships peaked at $132.9 million in fiscal 2013. That's dropped since then, largely, as a result of the Legislature cutting the amount of the initial scholarship three times in 10 years.

December is the final month of the first half of fiscal 2020.

During the first six months of fiscal 2020, lottery revenue reached $239.5 million -- a drop from $259 million in the same period in fiscal 2019 -- due to a decline in draw game ticket sales revenue, the lottery reported on Friday to the governor and legislative subcommittee.

Draw game ticket revenue totaled $37.8 million, down from $60 million for the same period a year ago.

In that same period, scratch-off ticket revenue increased slightly, to $201.2 million compared with $198.6 million a year ago.

"Our total sales are down versus last [fiscal] year because we are competing against a year where we [had] several huge Mega Millions and Powerball jackpots," Woosley said. "We have had very little jackpot activity this [fiscal] year, which is impacting our draw game sales."

In the first half of fiscal 2020, the amount raised for college scholarships totaled $34.6 million -- a decline from $43.7 million in the same period in fiscal 2019 -- according to the lottery.

"The high amount of proceeds raised as a result of those jackpots in the fall of 2018 is the main difference in this [fiscal] year versus last [fiscal] year," he said.

For fiscal 2020, Woosley has projected, in what he calls a conservative forecast, total revenue of $497 million and net proceeds at $89.3 million.

As for the impact from increased competition, from in-state casinos and the Mississippi lottery, total sales declined year over year in November and December in counties that either have casinos or access to Mississippi.

Sen. Jimmy Hickey, R-Texarkana, said he wants to hear from officials from Camelot Global Services because "I want to make sure Camelot is watching and we have plans to meet [the lottery's projected] budget."