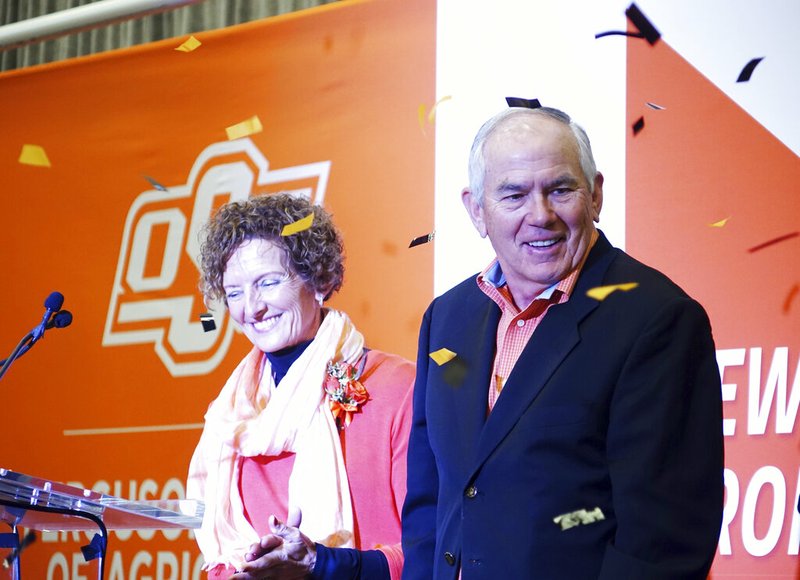 In this Wednesday, Jan. 15, 2020 photo, Kayleen and Larry Ferguson, who donated $50 million to Oklahoma State University, smile during the announcement in Stillwater, Oak.. Half of the donation will create an endowment for OSU agriculture students, and the other half will go toward the building of a new facility for agriculture research and learning at OSU. In recognition of the gift, the College of Agricultural Sciences and Natural Resources will be renamed the Ferguson College of Agriculture. (Tanner Holubar/The News Press via AP)

STILLWATER, Okla. — Two former students have given Oklahoma State University one of its biggest donations ever, $50 million, which the school will spend on agriculture research and the construction of a new building.

The contribution from alumni Kayleen and Larry Ferguson designates $25 million to the university's agriculture college, which will be renamed Ferguson College of Agriculture. The other half of the donation will kick-start a fundraising campaign for the construction of the new agriculture college building on the Stillwater campus.

"Not only will we have the right tools in place with this wonderful new building, but the Fergusons' gift ensures we can always recruit and support the brightest minds in the world," OSU President Burns Hargis said. "That impacts the way we teach, the way we research and how we share that information with others through OSU Extension."

The new Ferguson College of Agriculture is expected to cost $100 million. In addition to the $25 million the Fergusons put toward its construction, the university is seeking to raise another $25 million in private donations. The school will pay for the remaining half.

With the Fergusons' donation, OSU has collected $30 million in private funds so far.

"Yes, it may have our name on the building, but you are the agricultural family," Kayleen Ferguson said Wednesday during the donation announcement at the Stillwater campus.

The couple met as students at OSU in 1975 and now live in Hot Springs, Arkansas.

The new building is expected to open 2023 and to replace the aging Agricultural Hall, which has been in operation since 1957.

"I think having that noteworthy of a gift come for our college of agriculture, it supports the heritage of the institution," said Tom Coon, dean of the agriculture college. "At the same time, it's not just about the past. It's about projecting our college forward as a leader nationally and internationally."

Coon noted that private donations have been critical for public universities, as state funding continues to decline in Oklahoma.

Funding for the state's public higher education sector has dropped by $200 million in the last 10 years.