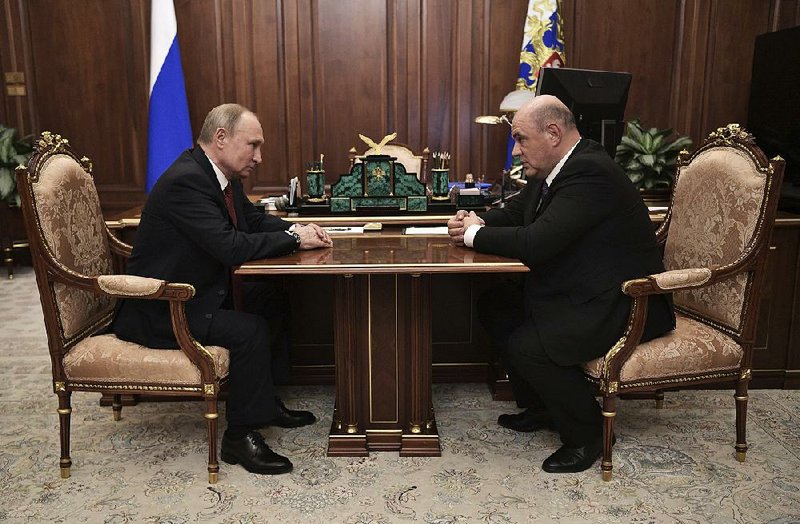 MOSCOW -- President Vladimir Putin engineered a surprise shake-up of Russia's leadership Wednesday, proposing changes to the constitution that stand to keep him in power well past the end of his term in 2024.

Hours after he made the proposals, Prime Minister Dmitry Medvedev resigned and less than three hours after his resignation, Putin offered the post of prime minister to Mikhail Mishustin, the head of the Russian tax service who is viewed as a possible placeholder as Putin reshapes Russia's power structure.

Putin kept his longtime ally Medvedev in the Kremlin's leadership structure by appointing him to the newly created post of deputy head of the presidential Security Council. But the duties and influence of that position are unclear.

Mishustin, who had been with the country's tax service for 10 years, was a surprise pick to replace Medvedev because of his relatively low-profile nature. That suggested that Putin may not view the prime minister as his political heir as president after 2024, and could select among other high-ranking officials vying for the role.

The shake-up sent shock waves through Russia's political elites who were left pondering what Putin's intentions were and speculating about future Cabinet appointments.

Andrei Kolesnikov, a senior fellow and the chairman of the Russian Domestic Politics and Political Institutions Program at the Carnegie Moscow Center, called the day's events "absolutely unprecedented."

"There has been nothing similar in the history of the Soviet Union or post-Soviet Russia," he said.

Putin's proposed constitutional changes, announced in a state-of-the-nation address, indicated he was working to carve out a new governing position for himself after his term ends, although the suggested changes don't immediately specify what path he will take to stay in charge.

The 67-year-old former KGB operative, who has led Russia for more than 20 years, often keeps his intentions secret until the very last moment.

After Putin served two presidential terms from 2000 to 2008, he swapped places with Medvedev, who served one term. Medvedev was widely seen as a caretaker, enabling Putin to retain power behind the scenes, but there was also believed to be a rift between the two halfway through Medvedev's presidency. Putin then took over the presidency in 2012 and was reelected last year.

Alexei Navalny, the most prominent Russian opposition leader, tweeted that Putin's speech clearly signaled his desire to continue calling the shots even after his presidential term ends.

"The only goal of Putin and his regime is to stay in charge for life, having the entire country as his personal asset and seizing its riches for himself and his friends," Navalny said.

Under Medvedev, the constitution was amended to lengthen the president's term from four years to six, although it limits the leader to two consecutive terms.

In televised comments Wednesday, Medvedev said he needed to resign in light of Putin's proposed changes in government.

Putin suggested amending the constitution again to allow lawmakers to name prime ministers and Cabinet members. The president currently holds the authority to make those appointments.

"It will increase the role of parliament and parliamentary parties, powers and independence of the prime minister and all Cabinet members," Putin told an audience of top officials and lawmakers.

At the same time, Putin argued that Russia would not remain stable if it were governed under a parliamentary system. The president should retain the right to dismiss the prime minister and Cabinet ministers, to name top defense and security officials, and to be in charge of the Russian military and law enforcement agencies, he said.

Putin emphasized that the constitutional changes must be put to a nationwide vote.

Putin has been in power longer than any other Russian or Soviet leader since Josef Stalin, who led from 1924 until his death in 1953. Under the current law, Putin must step down in 2024 after his term ends.

Observers speculated that Putin might try to stay in charge by shifting into the prime minister's seat again after increasing the powers of parliament and the Cabinet and trimming presidential authority.

Political analyst Dmitry Oreshkin said Putin's speech made clear that he was pondering the move to premiership.

"Putin is advancing the idea of keeping his authority as a more powerful and influential prime minister while the presidency will become more decorative," Oreshkin said.

Information for this article was contributed by Vladimir Isachenkov, Jim Heintz and Kostya Manenkov of The Associated Press and by Isabelle Khurshudyan and Natalia Abbakumova of The Washington Post. 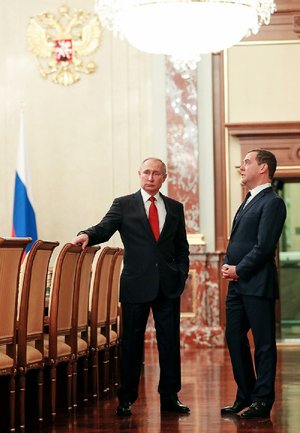 Russian President Vladimir Putin and Prime Minister Dmitry Medvedev wait for the start of a Cabinet meeting Wednesday in Moscow. In a surprise move, Putin proposed constitutional changes that will keep him in power well past 2024, when his term ends. Medvedev subsequently resigned and was replaced by tax official Mikhail Mishustin. More photos at arkansasonline.com/116russia/. (AP/Sputnik/Dmitry Astakhov)